Project Description: The implementation of the idea started in 2010 with the pilot project “Public information on-line database – Public information registry”, which was continued two times – in March 2011 and June 2012.

Project Goal: The goal of the project is supporting of the development of freedom of information by increasing level of accountability of state authorities and civic engagement in decision-making process and public monitoring and control over the government.

As the last three years of implementation has seen gradual development of analytical capabilities (e.g. “Freedom of Information Guidebook”, about 90 articles on Opendata Blog, researches on special transfers to regions before 2012 Parliamentary Elections; comparison of FOI legislation in Serbia and Georgia; Construction costs of the new Parliament building in Kutaisi; comparison of FOI legislation in Croatia and Georgia; Commissioner and Openness of Public Information - Overview of the Worldwide Practice etc.), and since it has proved to attract much more public interest, citizen engagement and media coverage, IDFI intends to further extend the research component of the project. This will be achieved with the following steps:

-         Publication of researches and reports on more comprehensive issues

-         Editing guidebook to include all updates and legislation changes

Distribution-popularization of information will be made through the following sources:

-         Sharing the information through social networks and public surveys;

-         Organizing introductory meeting with society, events in regions of Georgia;

-         Sharing information added on database by using the informational resources of NGOs, involved in the project;

-         Organization of press conferences, meetings, round tables, discussions for sharing existing problems, experience and trends revealed in the process of implementation of the project;

-         Distribution of social advertisement regarding the database in the internet space.

In the framework of the project, IDFI plans to hold meetings in regions with local society and representatives of media. Population of the regions will be informed about activities of IDFI, the project team will carry out discussions about the importance of accountability and transparency of state authorities, importance of civic engagement and other interesting issues. Also, IDFI will assist to local media and civil society organizations in the case of rejection or ignore of public information requests, will assist to fill the complaint against governmental organizations and participation in trials. These activities will support to civic engagement and establishment of civil society.

IDFI will submit administrative complaints against governmental agencies, in the case of ignoring or rejecting request of information. Resonant cases will be done about particularly important cases (abuse in court instances and sharing). The cases will be actively shared through media and press.

The Institute actively continues developing and advocating those legislative initiatives, which will be related to the availability of public information. 2013 should be one of the most critical periods to this end, as the government plans, in the frameworks of the “Open Government Partnership”, to both refine Article 3 of the General Administrative Code of Georgia (freedom of information) and to look over existing related legislation. The ideas of creating a separate FoI legislation and establishing the institution of a FoI commissioner suggested by the IDFI is being actively discussed at this time. The monitoring of the process of requesting and receiving public information electronically in 2013 will also be important. In this direction, the project team continues actively working on relevant studies and organizing meetings.

The research findings and the recommendations will be provided through individual meetings with the governmental institutions. Thus, individual face-to-face contacts will be the main form of interaction for communicating the recommendations. The research findings, will be presented in more detail during the presentations. As for the public discussions and meetings with NGOs, media and target group representatives, they will be arranged both to gain more insight about the specific topics of the project, and more importantly, to provide them with the tentative results and/or expectations of the project. These meetings and discussions may be either divided according to target groups, e.g. representatives of NGOs, media representatives, or be mixed. As for the main governmental stakeholders, the persons responsible for releasing public information will be the main stakeholders.

IDFI has good experience of promoting of its recommendations in the Public Sector and this is mainly arranged by active conversations and meetings. Our previous experience lets us think that the recommendations elaborated through the proposed project will be interesting for all public institutions and they will actively cooperate with us. Also, for our project it is very necessary to involve civil society expertise in all stages of the project implementation.

So, organized meetings will be aimed at informing the civil society and getting their feedback on researched and audited materials. The meetings will mostly take place in the regions. Focus group discussion method will be used, as they enable to grasp a variety of topics in little time. Participants of focus group discussions will be major players in Georgian civil society – CSOs, the media, students, activists etc. As a result of these discussions IDFI will receive updated information on the actual problems and topics needed more attention, which can be used in public information requests.

Also, flyers, publication, advertisements, social videos will be created with the aim to further promote the outcomes of the project. The videos will be prepared with a focus on introduction of those tools that could be used by citizens in requesting the public information; the flyers will include short information about the rights and tools of FoI e-requesting, the publications will include more detailed results of the research process. As for the advertisements, these will be used to promote the outcomes of the project, such as the blog, social videos or the www.opendata.ge. Such banners will be used in order to better advertise the project and ensure wide outreach to the civil society. As for the means of distribution, the commercials will be placed on a popular web-sites, social videos will be uploaded to the YouTube channel, the blog, IDFI web-sites, will be shared on social media. The publications and flyers will be made available on the presentations of the project. Besides, the flyers will be distributed either with focus general outreach, e.g. public places, or specific target groups, e.g. universities.

Within the framework of the project supported by Open Society Institute and Open Society Georgia Foundation, carried out by the Human Rights Information and Documentation Systems, International (HURIDOCS) is planed technical improvement, which is the opportunity for NGOs (Georgian Young Lawyers’ Association, Transparency International Georgia, Green Alternative) interested in access to public information to upload public data on www.opendata.ge themselves, which in turn, makes public database as an universal e-resource. In the event of successful implementation of the mentioned concept, the Public Information Database will become a consolidating source for the data of the NGOs working in this direction in Georgia. Reformation as a unified database, improvement of the search system and the unification of statistical data will give even more importance to www.opendata.ge and will strengthen the advocating and strategic mechanisms of the organizations participating in the project.

3.2.    Awards: nominations for the most accountable and closed public authorities;

One of the best ways to attract interest of public, media and state agencies to the project and to activities under the project is the award of nominations for the most accountable and closed governmental organizations.

Awards ceremony established by IDFI in 2012 for the most accountable and closed governmental organizations gained huge public and media interest after the presentation of the project results on April 12th, 2012. Representatives of public authorities, media and civil society attended the award of nominations. On September 12, 2013 IDFI has awarded public authorities according to the results of 2012-2013. IDFI plans on continuing tradition of awards, since it has become very prestigious and can be seen as additional incentive for ensuring access to public information among public authorities of Georgia. Besides, the Institute considers it very important to cooperate with those state authorities who got the negative award. It will be additional motivation for them to improve its place and level of transparency among the state institutions. This practice of awards ceremony is actively used also by the partner organization (The National Security Archive - “Rosemary Award” and Access to Information Program – “Golden Key and Golden Padlock”).

Permanent update of information on the web-page is one of the important components for successful implementation of the project and makes basis for other analytical, advocacy and awareness-raising activities. On the basis of inculcated practice, requesting of public information from all public authorities of Georgia will be continued (approximately 230 administrative bodies).

Informational provision of database will be provided from the following sources: 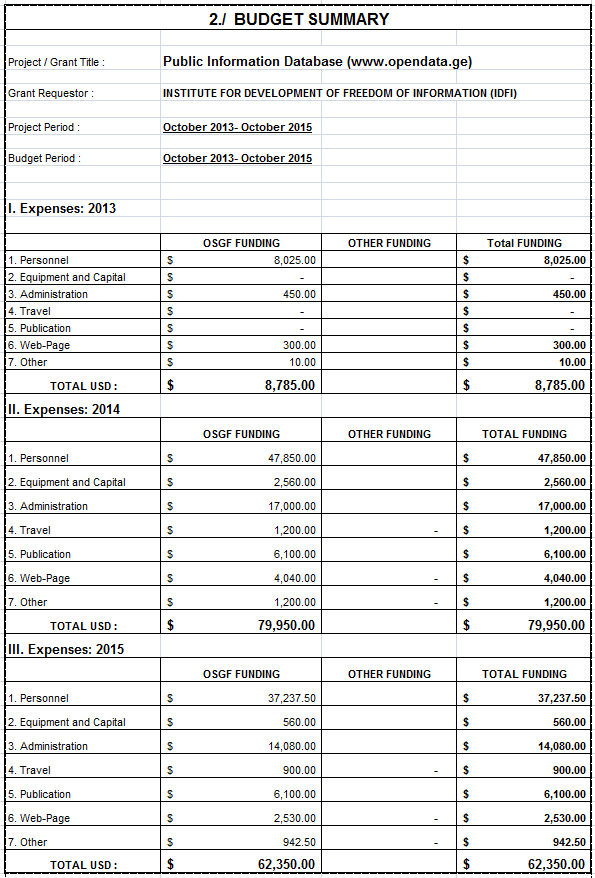