Since the Russian occupation of two Georgian entities, the so-called administrative ‘border’ moves deeper and deeper into Georgia. The so-called ‘state banner’ titled - Republic of South Ossetia, is getting ever-closer to Georgia’s central highway connecting East to West, while more and more territory is gathered behind the barbed wire fences representing the so-called ‘border’.

According to information provided by the Ministry of Defence of Georgia, the inhabited areas of two villages, Greater and Lesser Khurvaleti, turned out to be on the opposite side of the so-called ‘border’. Moreover, Georgia’s State Security Service provided information to IDFI, according to which inhabited areas of village Gugutiantkari was placed within South Ossetian borders after barbed wire fences were installed in 2013. Media channels certified that villages Zardiantkari and Roreti have been divided. Considerable parts of Dvani, Ditsi, Tsitsagantkari, Jariasheni, Adzvi have been added to the list of seized territories. In the case of Jariasheni, by 2015, almost the entire village has been barbed and placed within occupational border lines.

According to widespread information in the media, the Russian occupational regime is planning to go back to the old administrative borders of the South Ossetian autonomous province which existed during Soviet times. The Russian plan entails to mark the so-called border through village Karipala in order to take over parts of the Baku-Supsa pipeline.

The above-seen map illustrates the boundary line between the so called “South Ossetia” and the rest of Georgia. Blue represents the Baku Supsa pipeline and the doted line represents the new administrative border of the occupied regime.

In some instances the main inhabited areas of the villages remained on the Georgian side; however, the croplands of the village were swallowed beyond the barbed wire. The village inhabitants were left without their primary source of income. There is still fear of a continued “creeping occupation” and the threat of losing the inhabited parts of these villages as well. By using Google Maps, one can see the villages in the immediate vicinity of the so-called border that have to live in constant fear of ending up in South Ossetia one day. These villages are - Upper Niqozi, Ergneti, Ditsi, Mejvriskhevi, Plavismani, Tsitelubani, Karapila, Saribari, Tvaurebi and Avlevi.

The “Institute for Development of Freedom of Information” (IDFI) wanted to find out which villages currently still under Georgian control could end up within the so called ‘administrative boundaries’ in future. At the same time, IDFI wanted to know which map the Occupational regime used in order to continue occupying territory following the 2008 war.

In order to receive such information, IDFI has requested documents from the Administration of the Government of Georgia, the Ministry of Internal Affairs of Georgia, National Security Council of Georgia and the State Security and Crisis Management Council.

The state security service has solely provided the list of villages, which are not under control of the Georgian government.

The national security council has provided the “Law on Occupied Territories” which lists those territories. IDFI has sent an additional letter to this institution and received more information later on.

The ministry of defense was the only institution that provided detailed information. This information is shown below.

In the same period, the Georgian government had effective control over Akhalgori region, (Excluding 5 Ossetian villages – Tsinagori, Rduleti, Dzukata, Orchosani and Abrevi), as well as villages within the greater Liakhvi valley in the North of Tskhinvali, most villages of the lesser Liakvhi valley in the East and 6 villages of the Znauri region. In addition to that, Georgian jurisdiction covered the Northern parts of the Java region including the Mamisoni Pass and its adjacent territory.

- After the Russian millitary aggression against Georgia in 2008, the Georgian governing agencies and the majority of the Georgian population was expelled from the territories of the former South Ossetian autonomous district ( including Akhalgori and Mamisoni pass) since these areas were now completely controlled by the Occupation regime. The Georgian side lost control over 135 inahbited areas of Tskhinvali region, of which most were ethnically divided, half-Georgian, half-Ossetian. Moreover the villages that were entirely Georgian were completely destroyed. The Georgian populations of the mixed villages were forced to flee.

Territories taken over by Ossetian separatists and Russian occupation forces: 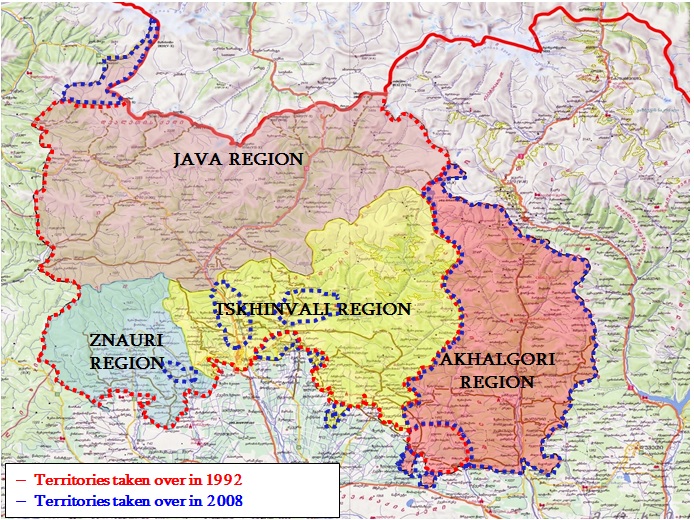 Inhabited areas taken over by the Ossetian separatists and Russian occupational forces since the 2008 War:

Town and Villages in Akhalgori Region

Maps used by the separatists and by the Russian border-guards

In order to define the so-called borders (occupation lines) of Georgia’s occupied territories, the border-guards of the Russian Federation and the separatist regime use the topographic maps ( Scale: 1 : 50 000 and 1 : 100 000) of the general staff of the Soviet military published between 1976-1986. It has to be mentioned that the occupational forces of the Russian federation together with representatives of the separatist Ossetian regime have conducted preliminary work to determine the previous administrative boundaries of the former ‘South Ossetian Autonomous District’ and later establish them by demarcation activities. More specifically:
- First of all, there were numerous topographic maps of the Soviet general staff and they have been published throughout different times. At the same time, they differed in the way they defined the boundaries of the former South Ossetian Autonomous District. For example, to define the administrative borderline in Gori region, the Russian side uses the topographic map of 1988 which portrays the locations as of 1984.
- Secondly, during the demarcation and establishment of the administrative border after the 2008 war, the Russian and Ossetian sides did not take into account the complex administrative outline of the South Ossetian district. As a result, much of the Georgian population lost access to the lands that they utilized on every-day basis.

To conclude, after the war in 2008, the Georgian state lost control over 151 settlements (135 in Tskhinvali region and 16 in Kodori Valley); moreover, creeping occupation is still progressing. It is expected that with the political and military support of Russia, Ossetian separatists are going to continue demarcation activities according to the topographic map of 1988, which portrays the administrative boundaries of 1984.