Statistical Information on Foreign Citizens Been Granted the Citizenship of Georgia, Residence Permit or the Status of a Refugee in 2005-2013 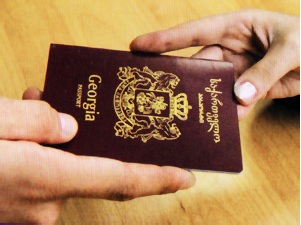 The Ministry of Internally Displaced Persons From the Occupied Territories, Accommodation and Refugees of Georgia is responsible for deciding on the issues of granting the status of a refugee to the nationals of foreign countries as well as to individuals having no nationality. The Refugee Status is granted to non-Georgian Citizens, who for the moment of making the application are on the territory of Georgia and have a well-founded fear of being persecuted for reasons of race, religion, nationality, membership of a particular social group or political opinions and who are unable or owning to such fear unwilling to return to their country of nationality, or a place of habitual residence.

Based on the data assessment conducted by IDFI, the tendency of the number of asylum seekers gradually rising year by year in Georgia has become obvious. According to the information received from the Ministry of Internally Displaced Persons from the Occupied Territories, Accommodation and Refugees of Georgia, during the past two years Georgia has received more than 1300 applications from asylum seekers coming from 30 different countries. The major part of the applicants come from the nationals of Asian and African countries.

The sharp increase in the number of the refugee seekers during the last two years, can well be explained by various events on international arena. The continuous tensions and armed conflicts in the middle east have forced the nationals of these countries to flee their residences and ask for a refugee status to different countries, among them Georgia.

The increase in the number of refugee seekers coming to Georgia during the last two years, as compared to 2005-2011 becomes obvious when looking at the statistical data. In 2012 599 individuals have referred to the government of Georgia with an application requesting the status of a refugee or a Humanitarian Protection. Among the applicants were 443 nationals of Iraq. The government of Georgia has accepted 44 applications. In 2013 717 individuals have applied to the government of Georgia for a status of a refugee, and again the number of the applicants coming from Iraq constituted the majority – 478 individuals. 31 persons were granted a refugee status or a humanitarian protection. It should be emphasized one more time that the high number of applicants coming from Iraq is closely linked with the ongoing armed conflicts in the Middle East. Most of the applicants have been in the refuge for the second time. They were firstly forced to flee their home countries during the armed conflict in Iraq, and were granted a refuge by the Syrian government, but after the conflict unleashed in Syria itself, the nationals of Iraq were obliged to leave the country again and seek refuge elsewhere. 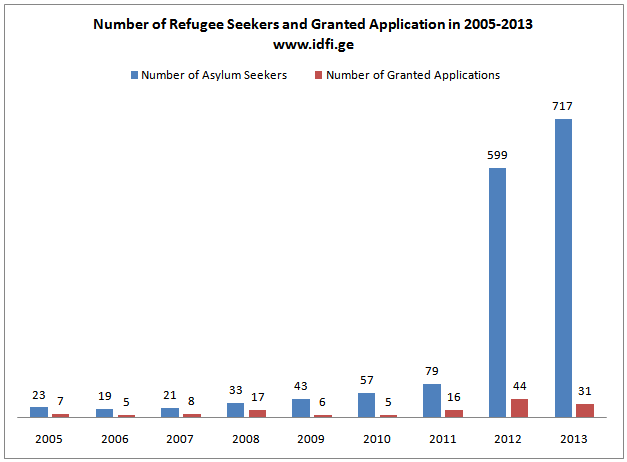 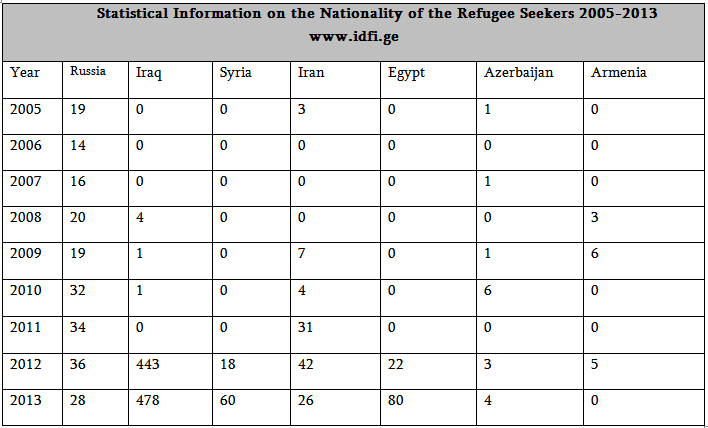 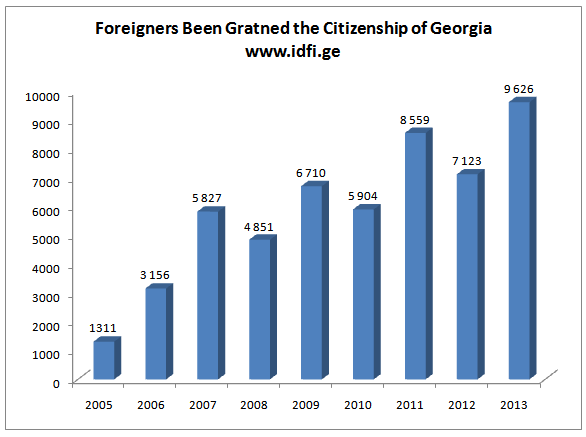 During the given period 37 462 nationals of Russian Federation were granted the citizenship of Georgia. The figure is nearly twice the number of the applicants coming from all other countries (15 605 individuals). 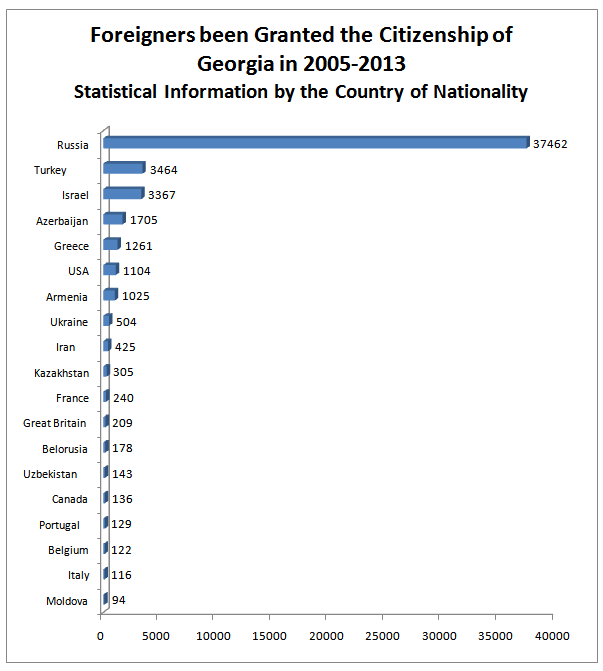 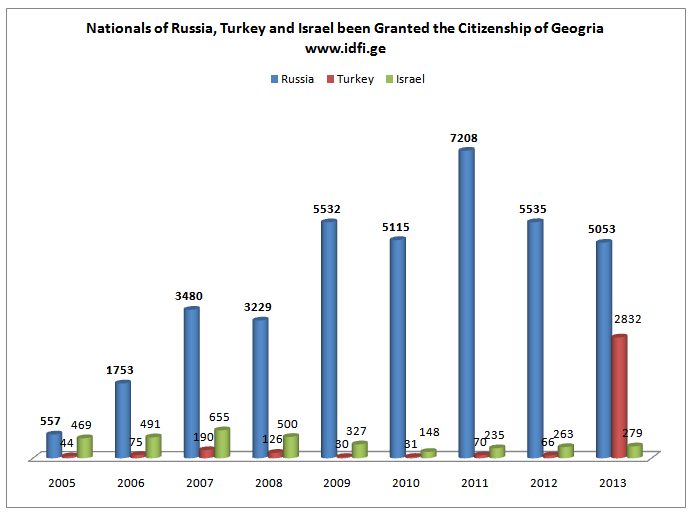 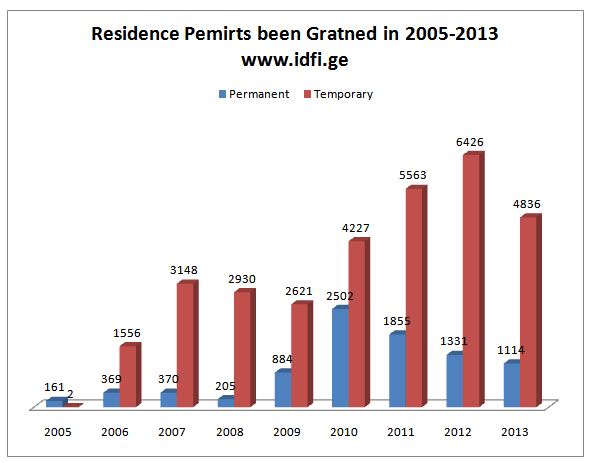 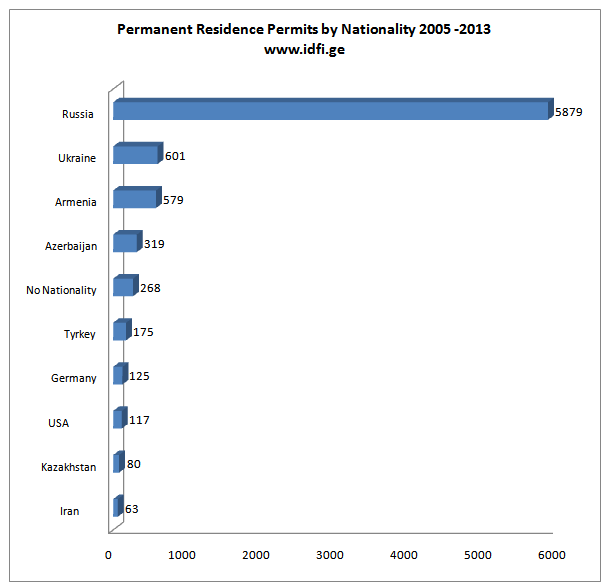 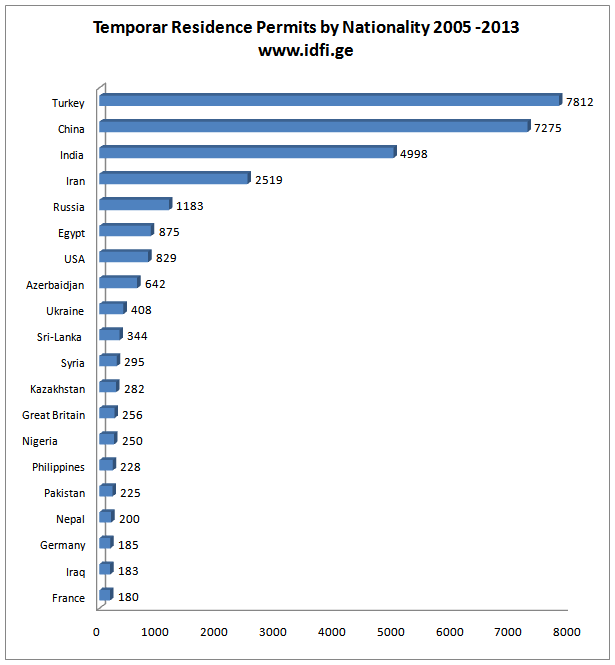