Within the framework of the project “Public Information Database – www.opendata.ge” IDFI has been assessing the level of transparency in public institution since 2010.

During the period of October 2013 – December 2014 within the auspices of the project Public Information Database IDFI has referred to 308 public institutions with 5 466 requests.

The Institute has received complete responses on 3258 standard requests, there were 319 incomplete replies, 68 instances of refusals, while 1313 requests were left unanswered. 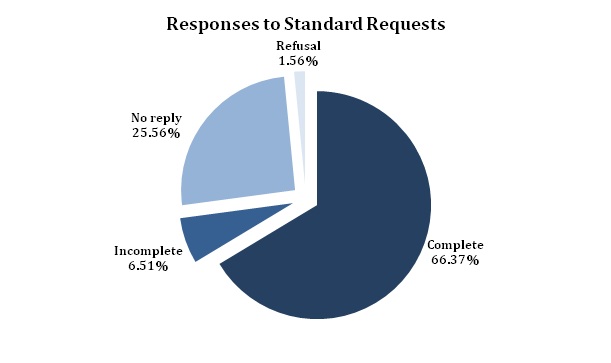 It should be highlighted that the 81% rate of complete replies observed immediately after the elections (October 2012 – September 2013) has been decreased to 66% during the current project, while the share of unanswered requests has increased from 11% to 26% and approached the rate before parliamentary elections. 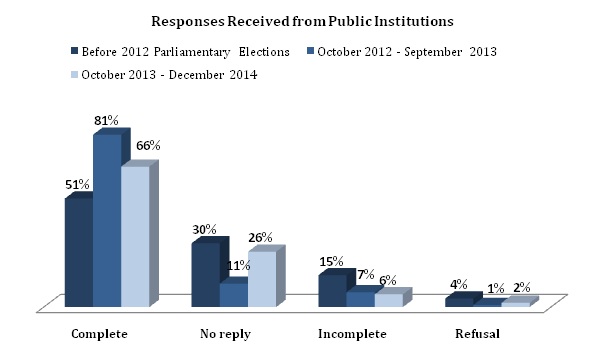 There were important positive changes in terms of access to public information in Georgian state institutions immediately after the parliamentary elections of October 1st, 2012. Most of the public entities disclosed information which was not accessible before (e.g. information on salary supplements and bonuses, service agreements, data on the costs of business trips abroad). Despite this, there was doubt that the mentioned was most likely linked with the change of government following the parliamentary elections. IDFI was actively calling upon public entities to maintain high level of access to public information. Unfortunately, it should be highlighted that during the year of 2014, the level of access to information was gradually decreasing in a number of state entities (e.g the System of the Ministry of Internal Affairs, the system of the Ministry of Finance as well as the one of the Ministry of Justice). Hence it was obvious that the positive trends observed immediately after the political changes in the country could, in a number of cases, only be explained by the fact that the newly adopted government was less reluctant to hide the information connected with the activities of the previous governing political group.

Based on the answered received from the public institutions during the period of project implementation, IDFI team has traditionally (See the ratings of previous years) elaborated the access to information rating.

According to IDFI, the most complete answers in compliance with the 10-day period were received from the following institutions:

In total 38 public institutions were granted 100% access to information rating. In addition to the ones listed above the following institutions should be emphasized: Civil Service Bureau, Penitentiary and Probation Training Center, Georgian Civil Aviation Agency, Office of Ombudsman, The Unified National Body of Accreditation - Accreditation Center, Hydrographic Service and Agency of Standards and Metrology. These entities have maintained 100% Access to Public Information Rating of 2012-2013.

It is crucial to highlight that in 2014 the most evident improvement towards higher level of access to information was observed in the Administration of the Government of Georgia. In contrast with the access to information rating observed during the period of 2012-2013 (75%) during the current period the entity improved the rating by 23% and reached the level of 98%. 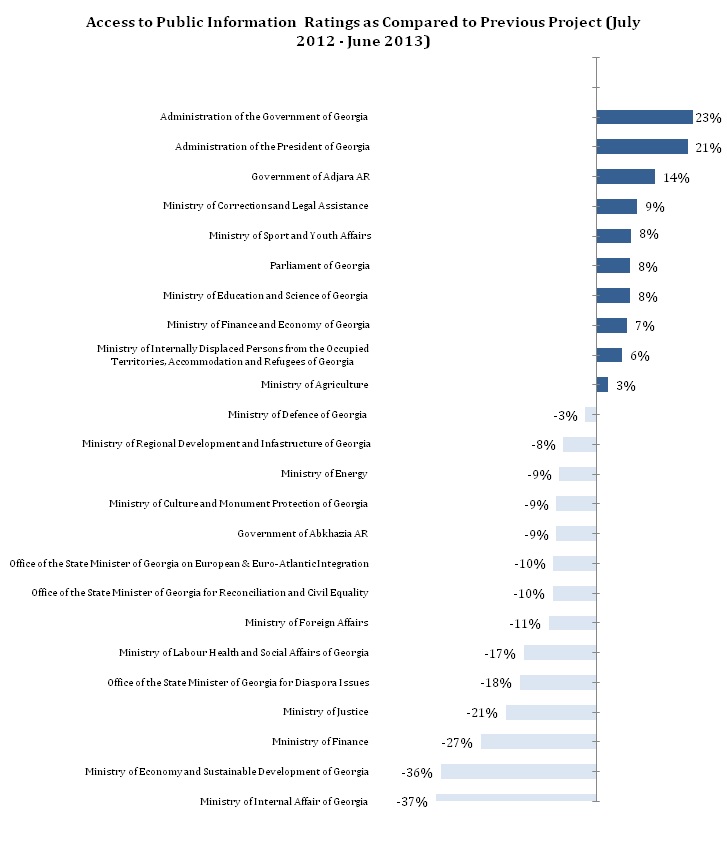 The low level of access to public information was also observed in the following administrative bodies:

In 2014 IDFI appealed against 25 decisions of public entities. In 19 cases the appeal was partially or fully granted. The decision on one administrative appeal against the Office of the Prosecutor is still pending. In four cases the decision of public bodies was appealed in the courts, whereas in one case IDFI referred to the Office of Ombudsman. It should also be emphasized that the court fully granted appeal of IDFI against the Ministry of Internal Affairs. The appeal was also granted in the case of IDFI v. Tbilisi City Court. In the dispute between IDFI and the Ministry of Finance 6 requests out of 7 were granted, by first as well as second instance courts. IDFI referred to the Office of Ombudsman in the case against the Ministry of Economy. The Ombudsman fully internalized the position of IDFI, holding that the Ministry did violate its obligation. Thus, the Ombudsman addressed the entity with recommendation to provide the Institute with requested public information. 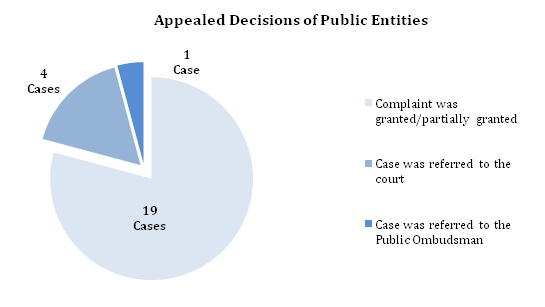 Based on the case law of IDFI during the past year it can be concluded that one of the most positive changes is observed in the Judiciary. In 2014 the judges accepted the appeals of IDFI in the cases, on which the courts were previously prone to take opposite decisions. The tendency should unambiguously be assessed positively as it highlights that the faulty practice of taking decisions in favor of administrative entities is changing towards the goals of higher level of transparency and objectivity.

Unfortunately IDFI case law emphasized one more time that Georgian legislation lacks operational leverages that would ensure that right to access public information is well observed and protected by public entities. In 2014 the Government of Georgia within the auspices of Open Government Partnership Initiative (OGP) undertook the obligation to review FOI legislation and adopt new law on Freedom to Information. During 2014, with the support of Open Society Georgia Foundation (OSGF), and with the involvement of the Ministry of Justice important progress has been achieved in this regards. The draft law on Freedom to Information was prepared by the working group, composed inter alia by the experts of IDFI and other NGOs working on the issues of transparency and accountability.

We hope that the law on Freedom to Information will be adopted in the nearest future and that the government will fully internalize the approaches developed by the above-mentioned organizations including the recommendations presented in this report.