Reasons Behind the Lack of Transparency of the Ministry of Finance 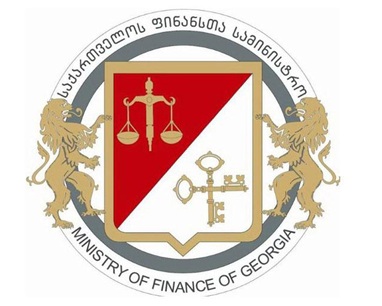 On January 27th, 2014 IDFI referred to the Ministry of Finance of Georgia (MoF) with the request to provide us with detailed information on various administrative expenses of 2013, including:

• Bonuses and salary supplements of high officials (indicating names and surnames of the officials);

• Representation expenses ( listing each event and their costs, time and venue of the event, as well as number of guests     attending);

• Information on urgent procurements of the Ministry.

On March 5th, 2014 IDFI received a response to the FOI request. However, the information was provided in an incomplete form, lacking numerous details.

On March 17th, 2014 IDFI filed an administrative appeal against the Ministry requesting to provide us with complete information. MoF refused to grant our request, after which the case between IDFI and MoF was taken to Tbilisi City Court.

On September 29th, 2014 Tbilisi City Court fully granted the appeal of IDFI requesting to disclose detailed information on various administrative expenses of MoF in 2013. The decision was appealed by the Ministry to the Appellate Court of Tbilisi. However, the Appellate Court did not grant the request of MoF and left the decision of the Tbilisi City Court in force. MoF took the case to the Supreme Court of Georgia. To-date the dispute is still ongoing.

According to the Constitution of Georgia the requested information unambiguously constitutes open public information. IDFI believes that the only rationale behind appealing the decision to higher instance courts is to procrastinate the process of disclosing requested information. In our opinion MoF itself has well internalized the fact that its appeal will not be granted by the court.

While more than a year long dispute between IDFI and MoF is underway the State Audit Office (SAO) started to look into different administrative expenses of the Ministry. On January 16th, 2015 SAO published audit check report of the Ministry for the year of 2013 and audit reports of compliance of 2012-2013. The audit check reports, have revealed numerous inadequacies and violations of Georgian legislation all of which are directly linked with the data that the Ministry refused to disclose in 2014. These inadequacies are linked with the information that has been subject to dispute between IDFI and MoF for more than year now will be discussed bellow.

As a response to the request of IDFI to provide us with detailed information on replaced vehicles, MOF only disclosed data on the number of purchased vehicles (22) and their summed cost (212 805 GEL). At the same time, based on SAO audit check report, in 2013 MOF has signed 8 contracts with different service providers. According to the contracts, the Ministry has replaced 73 vehicles worth 765 000 GEL with 73 new vehicles worth 2 618 200 GEL. Bellow please find the cases of irrational budget spending which are highlighted in the audit check reports.

• Vehicle replacement agreements are registered between MOF and intermediary companies, which provided the Ministry with vehicles in added price;

• Rectified vehicles have been replaced with new vehicles of same class;

• For unknown reasons, the price of vehicles which were planned to be replaced was set to lower price, than the one estimated based on expert opinions;]

• The intermediary companies traded the vehicles obtained from the Ministry with a higher price, as compared to the one set by the experts;

• In number of cases, the set price of the vehicles to be replaced was so low, that the ministry would be able to spend considerably less amount of finances, in case if it would instead purchase new vehicles via conducting a competitive procurement.

IDFI believes that the above described practice of replacing existing vehicles with new ones, suggests irrational spending of budget recourses. In addition, the cases of replacing new, rectified vehicles via intermediary companies, as a result of conducting direct negotiations rather than competitive procurements raises risks of corrupt agreements being arranged between MoF and intermediary companies.

As a response to the request of IDFI to provide the institute with detailed information on representational expenses (including list and costs of each event, time, venue, number of guests attending etc.), the Ministry informed IDFI that in the year of 2013 the entity has hosted 33 international delegations on which 188 395 GEL was spent. The Ministry abstained from providing IDFI with any additional information on other representational expenses and it was reluctant to disclose detailed data on the expenses of hosting the delegations.

According to the report of SAO the Ministry spent 258 100 GEL on representational expenses in 2013. In certain cases, the report identifies unnecessary expenditures and restaurant service costs, inadequate to the number of guests.

Similar to other requested information, MoF provided IDFI with summed information on salaries, bonuses and salary supplements of high officials. Therefore, the institute had no opportunity to determine the amount of salary given to each high official during 2013.

In addition to other financial information , the report of SAO focused on the issue of the system of remuneration at MoF.

The audit check reports found that, the budget of MoF was amended multiple times, as a result of which the costs allocated for salary remuneration was increased at the expense of cutting down the costs under the paragraphs of Goods and Services and Increasing Non-Financial Assets. In its report SAO unambiguously highlights that the process of planning the budget of the Ministry for the year of 2013 was not duly implemented. Precisely, once looking at the paragraphs of Goods and Services and Increasing Non-Financial Assets it becomes obvious that costs allocated for these two paragraphs were purposefully exaggerated, thus serving as a reserve fund for salary remuneration. The funds allocated to the abovementioned paragraphs were later on shifted to the paragraph of Salary Remuneration in order to ensure that bonuses were transferred to the accounts of high officials. 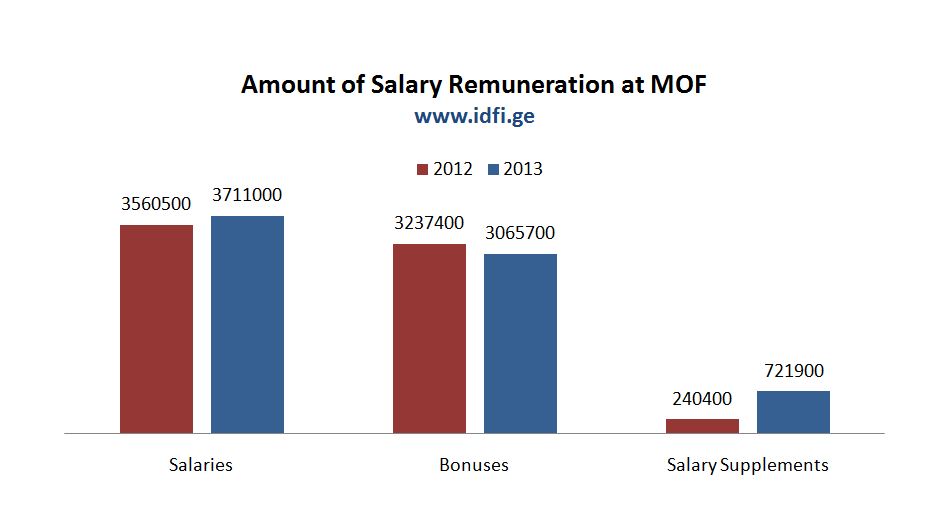 According to the audit check report of SAO, the legal acts on awarding high officials with bonuses and salary supplements do not indicate that any special additional responsibilities were placed on the high officials, nor does it suggest that the officials worked overtime. Moreover the rationale behind bonuses exceeding the amount of salaries is unknown.

As it has been revealed, the major part of the information which has been subject to dispute between IDFI and the Ministry of Finance (MoF) at different instances of courts for one year now, was included in the financial check report of State Audit Office (SAO). The Inconsistencies highlighted in the report confirmed suspicion of IDFI that the reluctance of the Ministry to disclose the data was motivated by the aim of keeping the information on the inadequacies secret, rather than by the arguement that the information requested did not constitute open public information.

The suspicion of IDFI, that the reluctance to disclose certain category of public information might be suggesting the fact of existing inadequacies was also confirmed by the last audit check report of the Service Agency of MoF. The report revealed inconsistencies linked with the administrative expenses of the Agency. It should be emphasized that the entity has been refusing to provide IDFI with complete information on different administrative expenses till to date.

IDFI welcomes the initiative of SAO to include in audit check reports the information which IDFI has been requesting from different public institutions and making available to the wider public for years. We would also like to call on SAO to direct its attention to those entities, which have been distinguished with low level of accountability and restricted access to public information despite of the continuous attempts of IDFI. We believe, that SAO, as the body responsible for controlling lawful utilization of public finances, should pay particular attention to those entities which refuse to publicize information on their financial activities.