The Most Closed and Unaccountable Public Institutions in Georgia in 2015

Within the framework of the implemented study IDFI revealed the most closed public institution, which is the Ministry of Economy and Sustainable Development. It was the institution that left biggest number of requests (44) unanswered.

Unfortunately the Ministry for Economy and Sustainable Development refused to publish information in 2014 and 2015; even though it provided the same information in the years before (2012-2013). In 2015 IDFI appealed two times to the Ministry; however, these appeals were not approved. Also in 2014, the Ministry did not respond to the recommendations of the Public Defender as well as IDFI’s open letter regarding the violation of the public’s right to receive information.

It is important to note that on October 28th 2015 Tbilisi City Court completely approved the appeals of IDFI and ordered the Ministry of Economy to respond to all 16 requests for information. In the years of 2013-2015, IDFI and the Ministry of Economy were actively and productively working together on several projects (Support for Transition to Digital Broadcasting, Research on the Effectiveness of State Industries, etc.) Due to such cooperative working experience, it was especially unexpected to encounter cases of disregard of accountability and transparency from the above mentioned Ministry.

Out of 286 administrative agencies, 8 institutions completely ignored all requests for information, violated the law by not abiding their duties and did not cooperate with IDFI in 2015. All requests were ignored by 7 agencies belonging to the Ministry of Justice and the Tsalka Municipal Council. 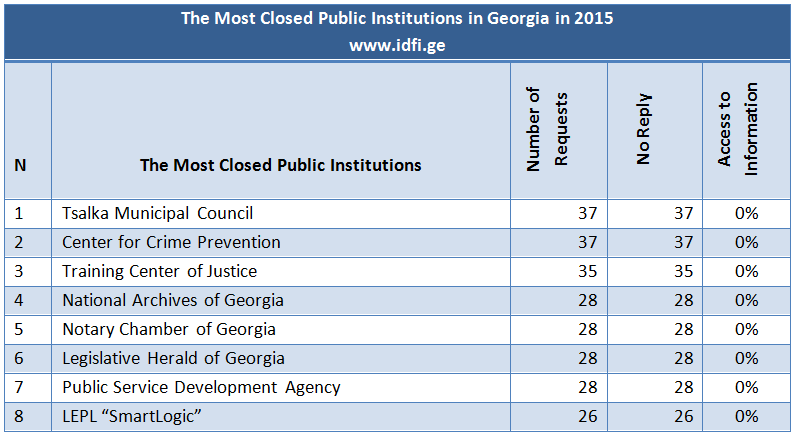 The agencies subordinate to the Ministry of Justice listed above, were distinguished for their high accountability within the years of 2012-2013, however, the level of access to information has considerably worsened in these agencies since 2014, as they left every FOI left unanswered in 2015.

(Progress and Regress in Public Institutions)

The graph below visualizes the percentage change of accessible information compared to previous projects (October 2013- December 2014). Attention needs to be paid to the decline in accountability of the Ministry of Justice and the Administration of the Government (the Ministry of Economy is one of the three least accountable public institutions). In spite of the fact that IDFI awarded the Administration of the Government for being the most accountable and transparent institution in 2013-2014, for receiving a rating of 98 % for access to public information, already in the beginning of 2015, the situation changed radically and the Administration left 24 requests unanswered and therefore only received 23 % in the new ratings. Thus, the decline in public accountability was 74.80%. 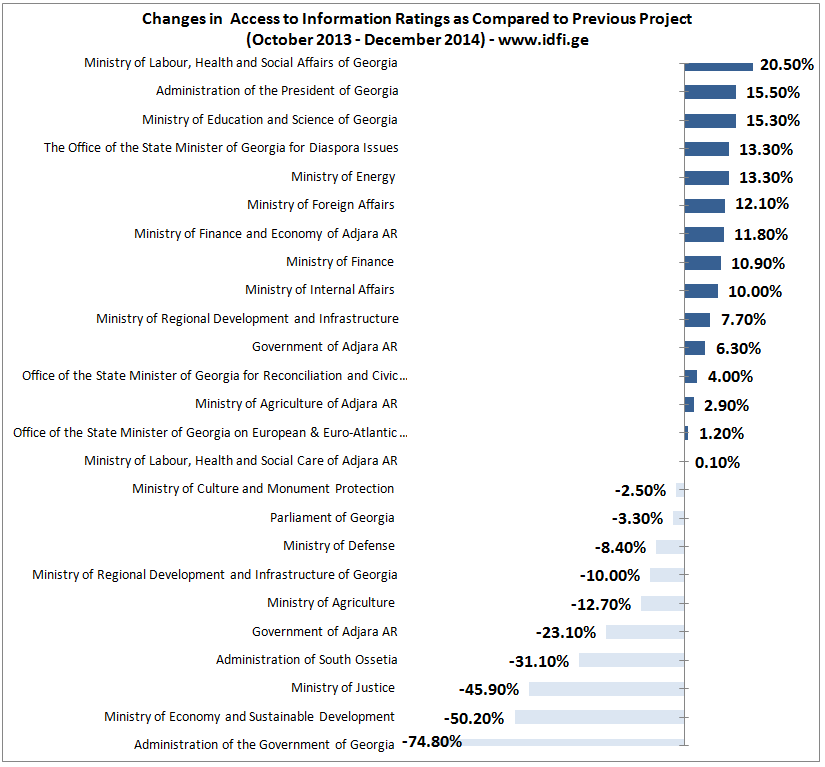 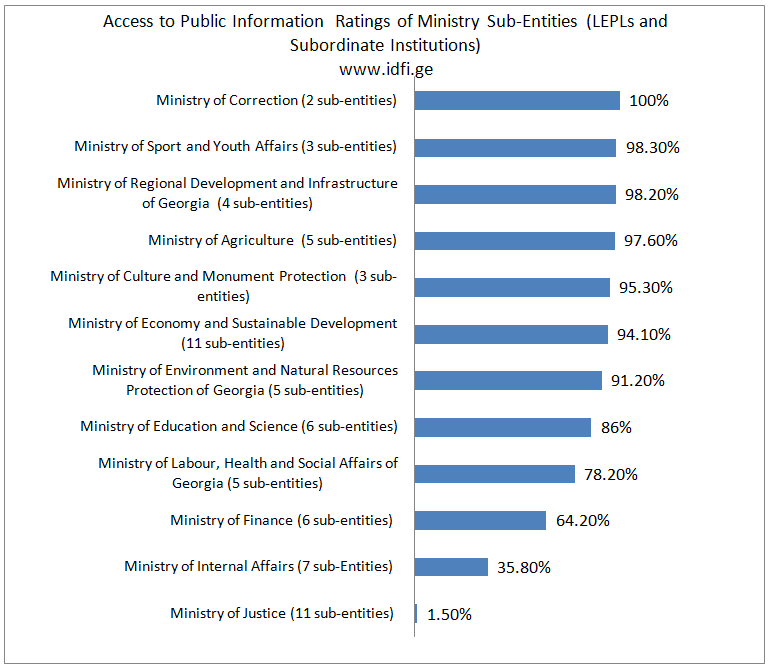 As compared to the project in October 2013 – December 2014, among the LEPLs, sub-agencies and other public institutions the biggest progress in terms of improvement of access to information rate was shown by the Georgian National Energy and Water Supply Regulatory Commission (progress 61%), while the public institution which has most worsened its practice in the same period was the National Bureau of Enforcement (regress 79%). 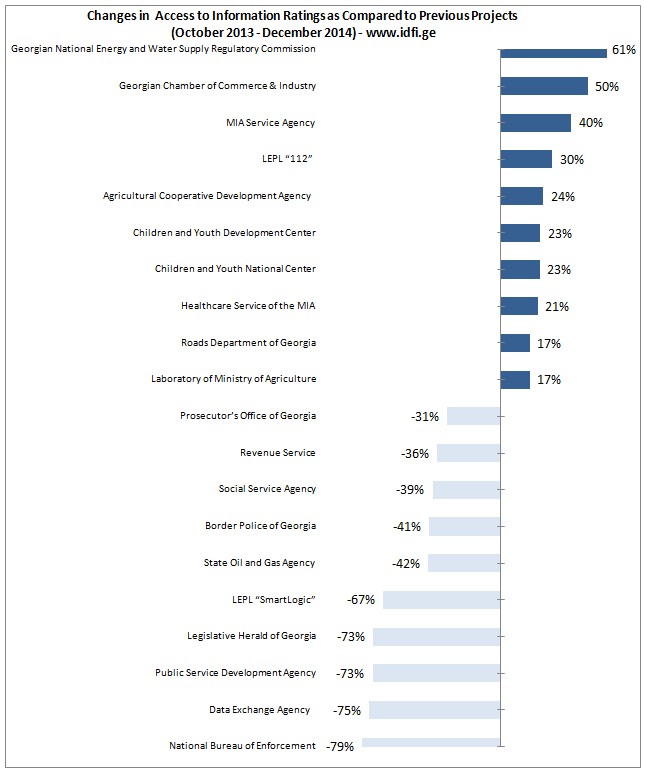 The situation differs in Tbilisi City Council. The 2015 indicator of 62.3% is the result of a decline of 27.2 % from the October 2013- December 2014 period. This decline occurred because in 2015, as opposed to previous years, the council did not provide complete information on bonuses and salary benefits to employees, representative expenses, mission expenses, etc. 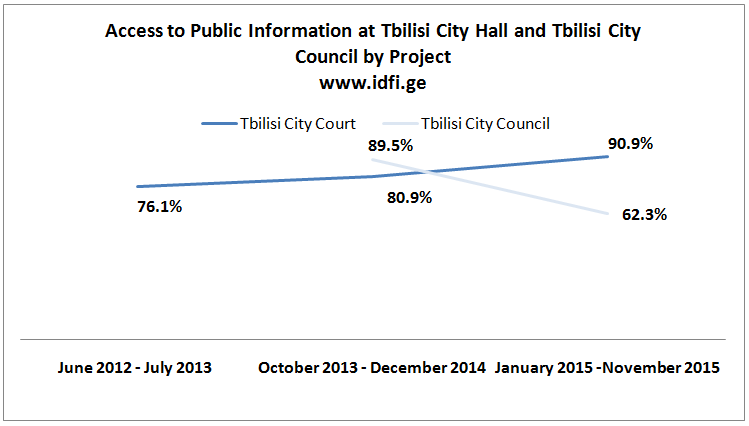