Practice of Disclosure of Public Information in 2010-2015

Extract from the Report “Access to Information in Georgia 2010-2015”

Within the framework of the projects implemented by IDFI in 2010-2015, 30152 Freedom of Information (FOI) requests were sent to public institutions, and only 24 438 replies were received. 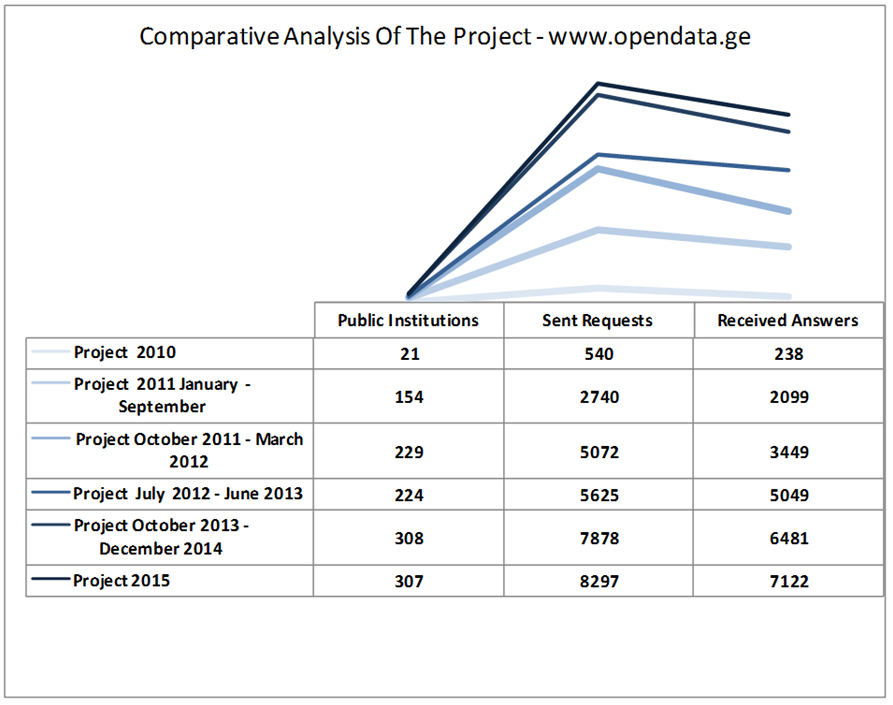 It should be noted that the dynamics of comparison between sent requests and received replies often varied.

As a response to 30 152 requests sent to the public institutions during 2010-2015, IDFI received 15 231 complete replies, incomplete replies were given to 2 309 requests, there were 442 refusals, 5 673 requests were left unanswered, while in 6 497 cases public entities stated that they had not implemented any particular action or did not have the requested information.

Unfortunately, the monitoring of access to public information implemented by IDFI in the framework of the next project has clearly shown that in case of a great number of public institutions, the improvement in terms of access to information was associated with initial stage of the new government, when the public institutions had less motivation to conceal any information. In particular, the 79% rate of complete replies at early stage of political changes decreased to 66% in the framework of the following project (October, 2013 – December, 2014), while the number of unanswered replies increased up to 26%. 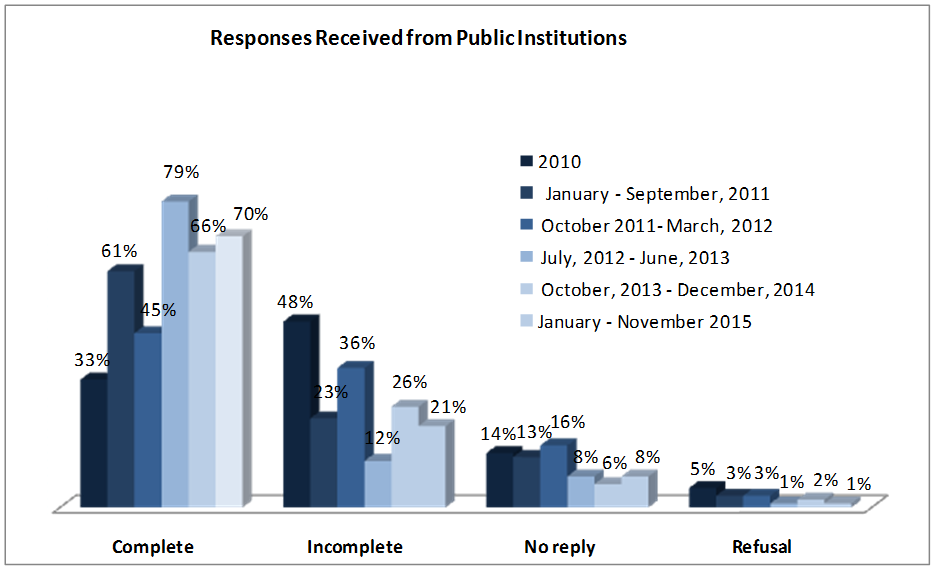 In the framework of the projects implemented in 2010-2015, there were different trends of access to information in terms of categories of public institutions. 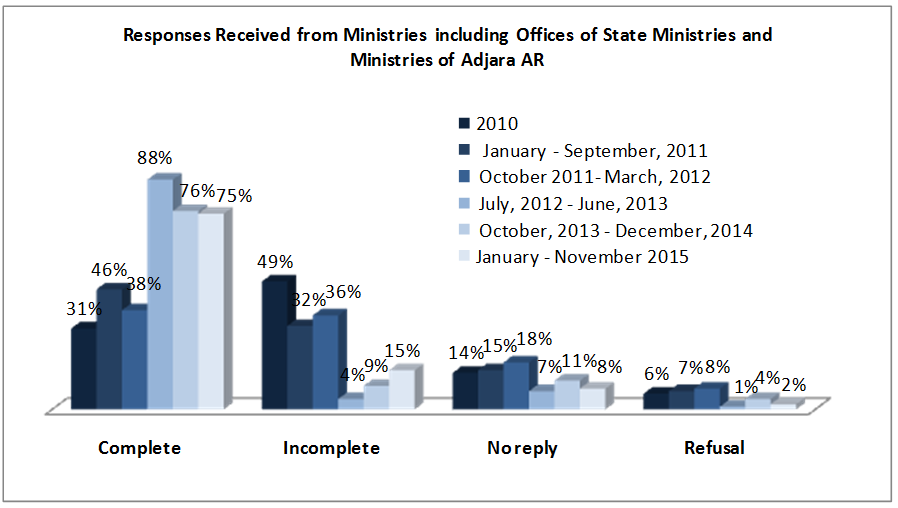 It should be noted that starting from 2014, the worsening of general index of access to information was especially due to a great number of public institutions that left FOI requests unanswered, which equals to refusal in legal terms. In particular, in the period between October 2013 and December 2014 the indicator of complete replies in case of sub-agencies decreased to 69%, while the number of unanswered requests increased up to 23%. The negative trend continued in 2015 and the rate of complete replies amounted to 61%, while the unanswered replies reached 30%. 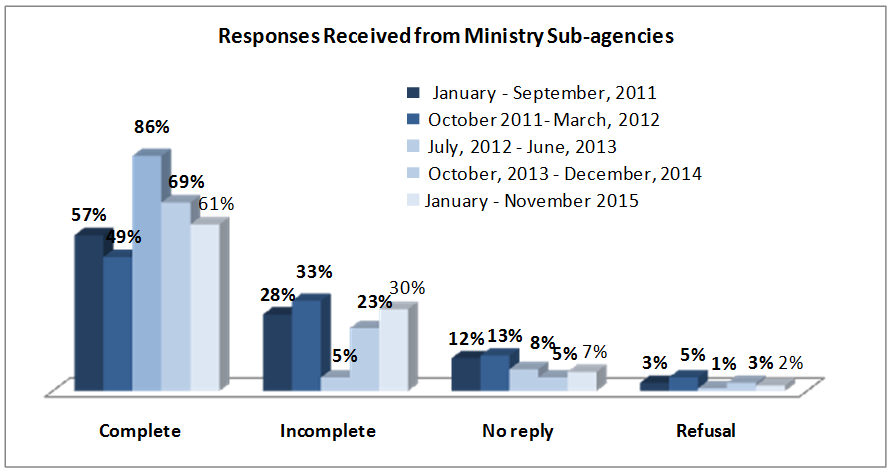 Improvement of general indicator of availability of the information in 2015 (January-November) was mostly due to significant increase of complete replies by the local self-administration bodies. In 2015 complete replies of self-administration units compared to the previous project (October 2013 – December 2014) increased by 11%, and the requests left without reply decreased by 14%. 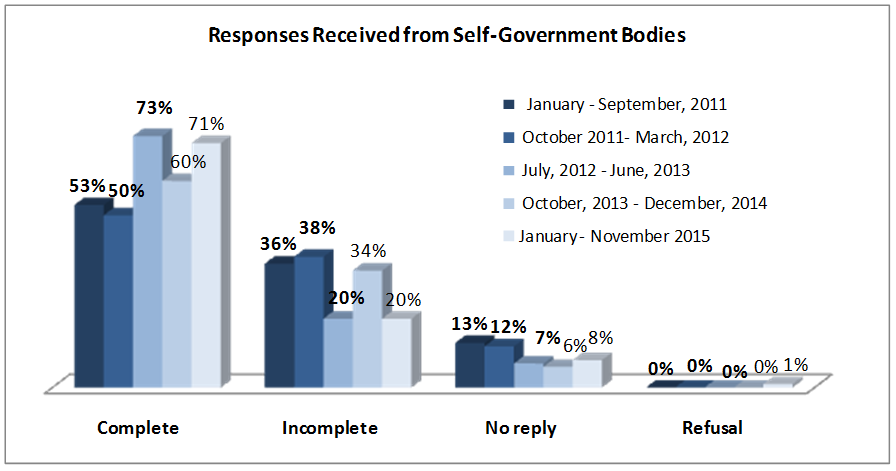 The most Accountable Public Institutions in 2010-2015

In the period of 2010-2015, the Institute has sent 103 requests of public information to the Office of Public Defender. IDFI received complete replies on 102 of those requests and only one incomplete reply. All the replies were provided within the 10 day period determined by the Georgian legislation.

A total of 81 requests were sent to Municipality Board of Dmanisi in 2010-2015, out of which all the requests were completely satisfied. In 17 cases, the period determined by the Georgian legislation was not respected.

As we mentioned above, since 2011 IDFI has been naming the public institutions with lack of accountability, the ones which did not fulfill the obligations defined by the law and did not ensure provision of public information. The highest number (17) of public institutions in terms of limiting access to public information was named in the period between October 2011 and March 2012, while the least (4) – in July 2012 – June 2013.

Starting from 2011 IDFI has revealed the most closed public institutions within the framework of each project. 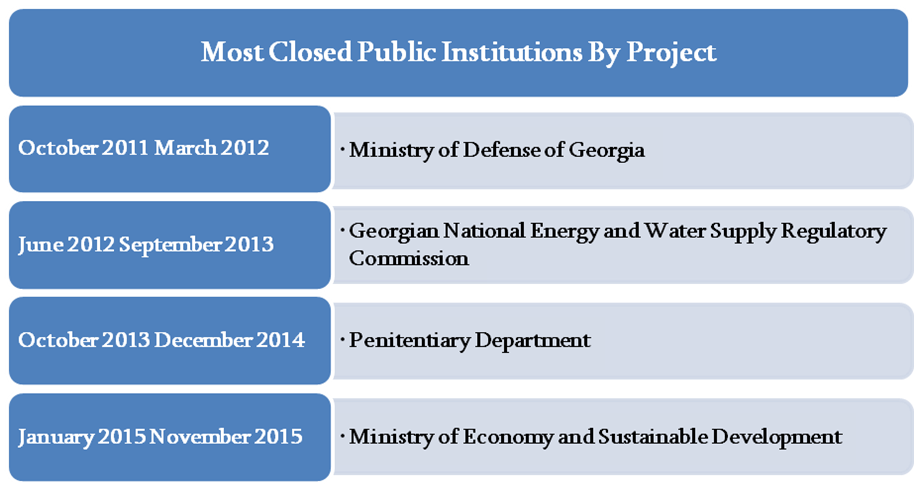 It should be noted that some of the public institutions named as the most closed ones significantly improved their performance during the following projects. The Ministry of Defense of Georgia, which was named as the most closed public institution in 2011-2012, has increased its level of access to information around 75%-90% during the following projects. In 2012-2013 the Ministry of Defense of Georgia was also named as one of those entities which showed biggest progress in terms of access to information.

The Penitentiary Department, named as the most closed public institution in 2014, was reorganized and became part of the structure of the Ministry of Corrections of Georgia. Thus, IDFI does not possess the 2015 data of access to information in case of this particular entity.