The Project is funded in the framework of European Union and the Parliament of Georgia Program: “Strengthening the System of Parliamentary Democracy in Georgia Project Document” which is implemented by the United Nations Development Programme (UNDP)

Open Government Partnership (OGP) is a multilateral initiative that aims to secure concrete commitments from governments to promote transparency, empower citizens, fight corruption, and harness new technologies to make government more open, effective and accountable, leading to more efficient use of public resources, innovation and inclusive growth. It was launched by eight founding governments, including the United States and the United Kingdom. UNDP is an active supporter of the OGP globally, especially in the component of Legislative Openness.

In September 2011 Georgia joined OGP. Among 65 OGP member countries, at the onset of its membership, Georgia was scored among the highest (15 out of 16 maximum) on budget transparency, access to information and asset disclosure. Nonetheless, Georgia received one of the lowest scores on citizen engagement, which highlights the need to strengthen its capacity to communicate with citizens and civil society. The Government of Georgia committed to increase transparency and accountability within its national institutions, as well as enhance citizen participation, improve government services and integrity in public sector. As an OGP member state, Georgia dedicated itself to transparent and collaborative processes in public service, state procurement, public finances, and administration of justice, public participation and developing innovative technologies. Within almost three years Georgia managed to adopt and implement the first Action Plan (2012-13), participate in the OGP Steering Committee elections and adopt the second Action Plan (2014-15). In September 2014, Georgia was elected as an OGP Steering Committee Member for two years.

OGP Georgia 2014-15 Action Plan encompasses 27 commitments and 16 responsible agencies. The commitments meet four challenges of OGP: public service, increase of public participation, improved management of public resources and creating safe environment. It is notable that both Action Plans of the Government of Georgia (2012-2013 and 2014-15) were elaborated with the active cooperation of the government and the civil society. Representatives of Government and NGOs had been cooperating through the national coordination mechanism – Forum, which is co-chaired by the Government through the Ministry of Justice and the civil society through the IDFI.

Despite the advocacy of the civil society organization in Georgia, commitment of the Parliament of Georgia was not included in the National Action Plan 2014-2015, namely supporting the civic engagement in legislative processes through establishing citizens’ petitions system and a tool to enable citizens to comment on draft laws.

In fact, parliaments’ engagement in citizen participation in democracy is crucial. Parliaments as representative branches of democratic governments are meant to provide citizens with links to the policy-making process and with methods of holding the executive branch to account. As a place for informed debate on the issues affecting citizens, parliaments are ultimately responsible for finding compromise among competing interests, enacting these compromises into laws, and ensuring their successful implementation. Meaningful commitments to advance parliamentary openness should demonstrate a respect for citizens’ right to openness, participation and accountability, as well as a desire to deepen the relationship of trust between citizens and their parliaments more broadly.

OGP pays much attention especially to Legislative Openness which is the newest direction in OGP (as most of the commitments are related to Executive branch of the government.). Legislative Openness Working Group (LOWG) provides peer to peer support and sharing of experience, in response to specific requests from partners.

Over the period from 1 December 2014 to 30 November 2015, the project will focus on the following activities: 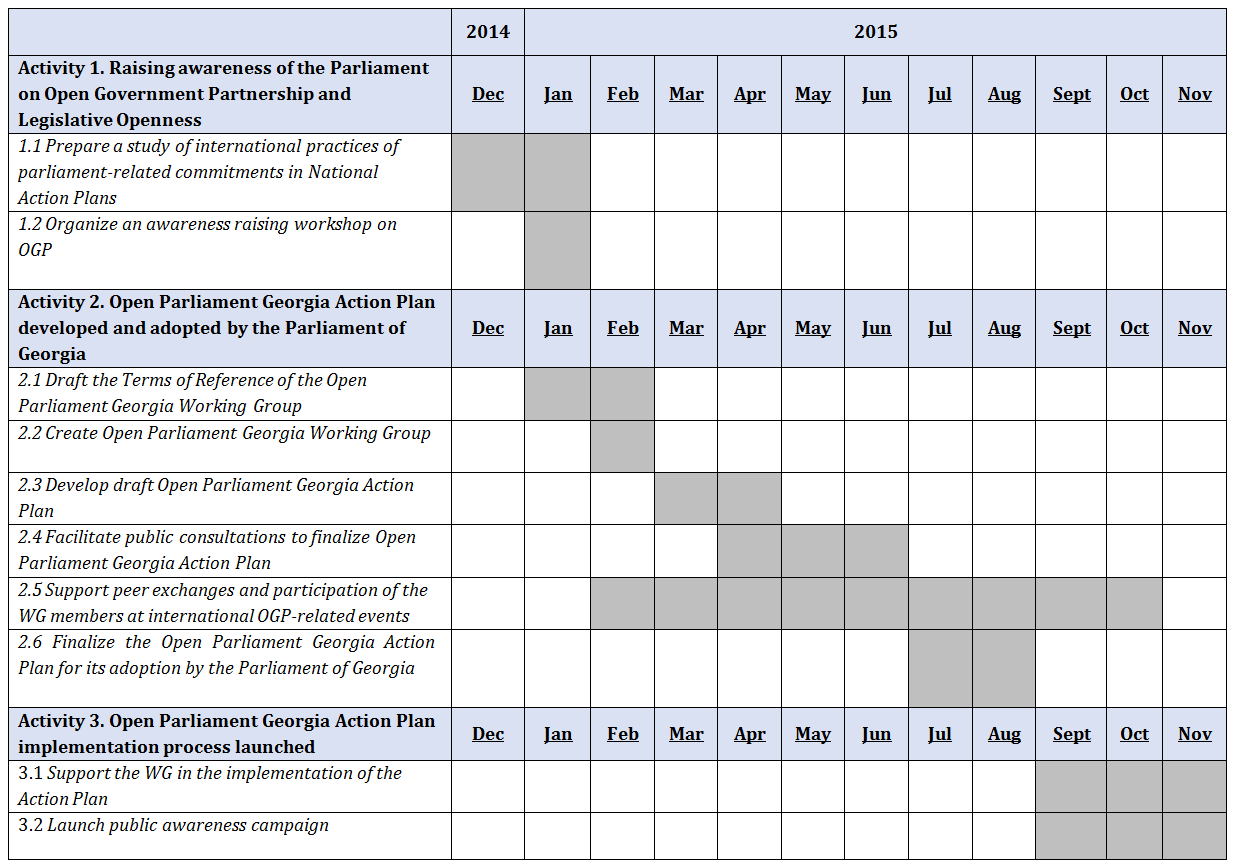 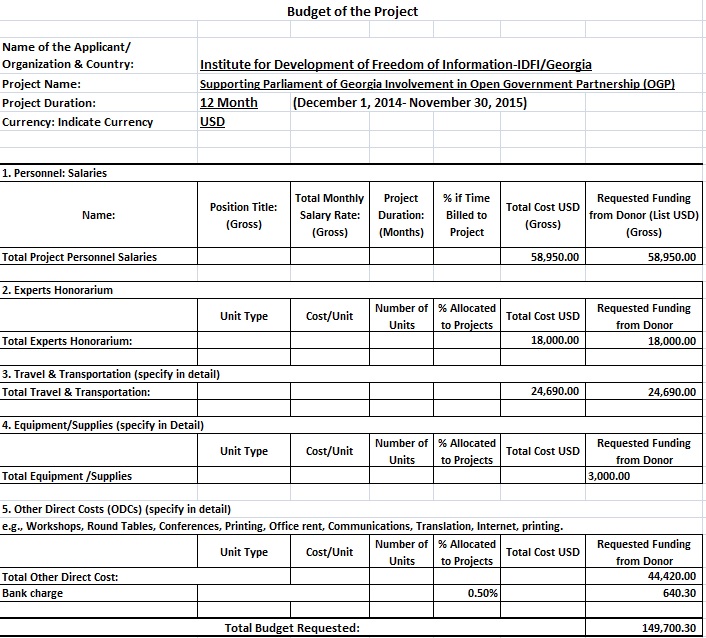 Call on EU to join OGP

The Voice of a Customer - Open Government Partnership Reward Competition

Meeting Regarding Recommendations on Parliamentary Openness |21 May 2015

Meeting on the Issues of the Parliamentary Openness | 14 May 2015

Parliament of Georgia joined the Open Government Partnership | 1 May 2015