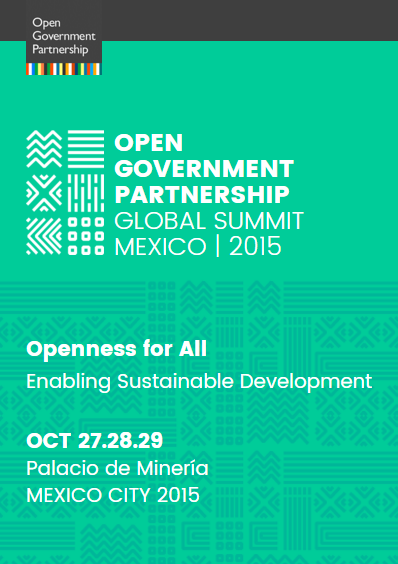 The summit is expected to gather around 1,500 participants - including representatives from civil society organizations, businesses and governments. Among the attendees will be representatives of the Institute for Development of Freedom of Information (IDFI): Director - Giorgi Kldiashvili, Chairman - Levan Avalishvili and Project Coordinator - David Maisuradze.

Over the course of workshops, panel discussions, plenaries and social gatherings, participants will be able to share experiences from their respective countries and provide real examples of how openness can improve public services, make governments more accountable to the people, raise civic engagement, prompt innovation, etc. In addition to this, it will be highlighted what role open government can play in the implementation of the Sustainable Goals of the Post-2015 Development Agenda.

Notably, Giorgi Kldiashvili will take part in a number of sessions, such as: 'OGP Civil Society Knowledge Sharing,' 'Working with Governments on NAPs' and 'Open Parliament Action Plans - From Idea to Implementation.' While Levan Avalishvili will deliver a speech within the session of 'Citizen Centric Anti-Corruption Initiatives'. Among the speakers at the conference will be Ketevan Tsanava and Zurab Sanikidze from the Analytical Department of the Ministry of Justice of Georgia and Giorgi Oniani, Deputy Executive Director of the Transparency International - Georgia. Moreover, with the support of the UNDP and the EU, the IDFI ensured the attendance of the MP - Tamar Kordzaia and the Head of Public Relations and Information Department - Nino Beradze, at the OGP Global Summit.

Therefore, the Open Government Partnership Global Summit Mexico 2015 is anticipated to provide an opportunity for exchanging experiences, practices and to lay out a framework for further cooperation among the OGP member countries and their representatives.

It should be noted that the Open Government Partnership (OGP) is a multilateral initiative that was launched by eight founding governments (among them, the USA and the UK) in 2011 in order to provide a platform for domestic reformers to make their governments more responsive, accountable and transparent to their citizens. The OGP initiative unites 66 participating countries around the principal beliefs and goals mentioned above.

Soon after the OGP was initiated, Georgia joined the Partnership in 2011, declaring that the cornerstone principles of the OGP had been on the agenda of the Georgian government long before the Partnership was launched. Thus, the OGP was an excellent opportunity for Georgia to move beyond achievements the country had already made.

Successfully, Georgia not only became an OGP participant country but, acknowledging the progress Georgia has made in the open governance, in September of 2014, country was elected as an OGP Steering Committee member for two years.

On September 14-15th, International Conference within the OGP Global Legislative Openness Week was held in the Parliament of Georgia, Tbilisi, Georgia. The two-day conference - 'Committing to Openness: Parliamentary Action Plans, Standards, and Data' was attended by the representatives of the legislative and executive bodies of Georgia, representatives of international organizations and NGOs located in Georgia. Moreover, participants had come together from more than 32 member countries of the OGP.

It should be mentioned that the Open Government Partnership team has recently announced the OGP Government Champions Award. The Award is intended to showcase the ideal co-creation dynamic between the government and civil society while elaborating the National Action Plan.

IDFI has nominated the Inter-Factional Working Group of the Parliament of Georgia since the Institute believes, Inter-Factional Group, consisting of 11 Members of Parliament from majority and minority factions, has made an active input in the process of elaboration of the Action Plan and putting forward the commitments, which the Parliament is supposed to implement in the years of 2015-2016.

Three semi-finalists (Georgia, Costa Rica and Sierra Leone) were selected by the Award selection committee and an award winner will be determined by a public vote on the following website - https://review.wizehive.com/voting/ogp-champions. The voting will be open before October 27th. Thus, the winning government will be presented with the Award at the OGP Civil Society Day in Mexico within the OGP Global Summit Mexico 2015.