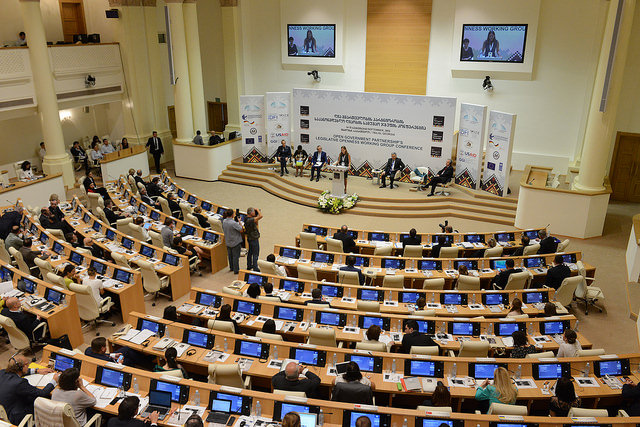 As a result, the cooperation of Inter-Factional Group of Parliament of Georgia and the Working Group of representatives of civil society turned out to be successful and the Bureau of Parliament has approved the Action Plan of Open Parliament of Georgia on the basis of the following cooperation, on 17th July of 2015. The Action Plan consists of 18 commitments and the Parliament is supposed to implement them in the years of 2015-2016. Action Plan intends to promote citizen’s engagement in the legislative activities, implement innovations in governance and support openness of the information.

It is notable that the Inter-Factional Group of Parliament of Georgia considered almost all recommendations coming from the civil society in the National Action Plan development process.

The Open Government Partnership team announced the OGP Government Champions Award in September 2015. The Award is intended to showcase the ideal co-creation dynamic between the government and civil society while elaborating the National Action Plan; to provide a high-level political visibility to the key actors who have played an immense role in upholding the OGP commitments and award the team that shared responsibility, authority and co-created the Action Plan, successfully managed safeguarding the voice of civil society actors in the National Action Plan development process and embraced the recommendations from civil society regardless political sensitivity of initiatives and difficulty for the government.

Winning the competition will give the opportunity to Georgian team of OGP to gain international recognition, which will further strengthen Georgia’s position in the framework of Open Government Partnership.