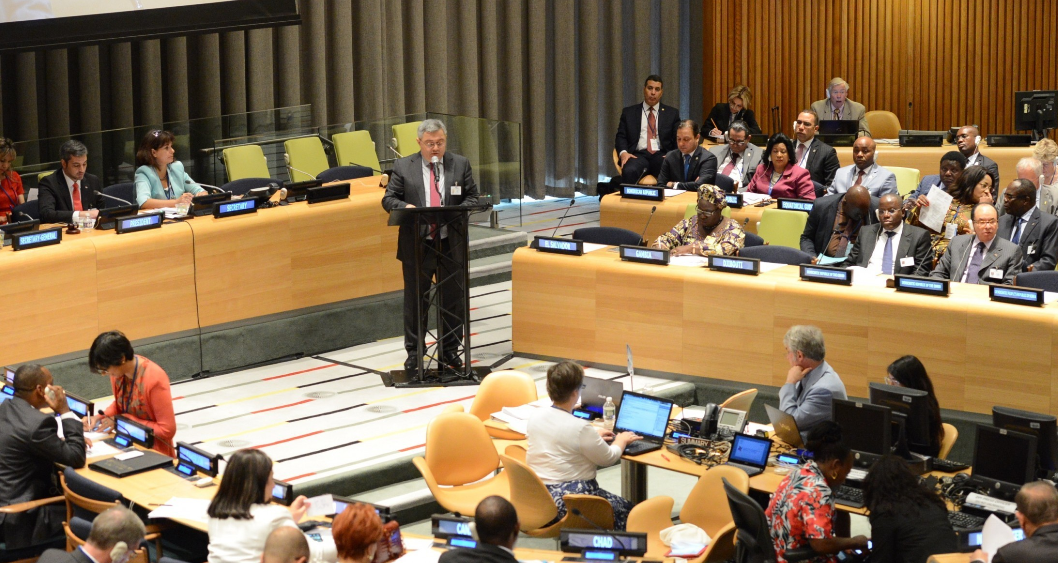 From August 31 to September 2 the Inter-Parliamentary Union (IPU) hosted Fourth World Conference of Speakers of Parliament in New-York, US. The conference was attended by about 180 parliamentary leaders, including more than 35 Deputy Speakers from nearly 140 countries.

The main topics of discussion were the ways how to effectively tackle global challenges to peace and democracy. It was acknowledged that parliament's role - in translating governments goals into concrete action through passing legislation, making budget allocations and holding governments accountable to the people - is crucial.

The conference was attended by the speaker of the Parliament of Georgia David Usupashvili. He held bilateral meetings with the Speakers of the Parliaments of Europe, Africa, Asia and Oceania, speaking about bilateral relations, ongoing events in Georgia, legislative activity, regional security and conflicts, Georgia’s integration into the EU and the NATO, etc. The Speaker also met with the Presidents of international organizations, such as OSCE and PACE, as well as with the UNDP’s CEO. Up to 170 Speakers delivered speeches at the session. Parliament Chairperson gave a speech about equality and inclusiveness of all citizens regardless of their political affiliation, gender, goals and opinion and the steps undertaken by the Parliament of Georgia by passing the antidiscrimination law.

Another topic the speaker emphasized was the way the state identifies the needs of the people. According to him it is essential to ensure “constant participation of the civil society and the citizens in daily activities of the government”. In order to tackle this issue the Parliament of Georgia is hosting Global Legislative Openness Working (GLOW) Group Conference under the Open Government Partnership (OGP). David Usupashvili clarified that the conference is aimed at finding the ways of not only informing the citizens about the functioning of the government and Parliament but also about the topics discussed at the Fourth World Conference of Speakers of Parliament, and design the mechanisms and tools to enable the citizens with less accessibility and limited ability to be fully engaged in democratic processes.

One of the main issues Georgia plans to present before its partners at the GLOW is the Open Parliament Action Plan that was adopted on July 17th of this year and aims to improve the citizen engagement in the Parliamentary activities.

At the final session the delegates adopted the declaration – Democracy for Peace and Sustainable Development, the main aspects of which are related to the topics, such as: democracy, peace, security, gender equality, migration and negative impacts, refugee and IDP rights, fight against poverty, elimination of all types of discrimination, youth involvement and civil activity, aspects related to minorities and people with disabilities, rule of law and the role of the Parliaments; accessibility to transparency, increase of accountability; Constitutional and institutional reforms; etc.

The World Conference of Speakers of Parliament is organized by The Inter-Parliamentary Union every five years and is supported by the United Nations Organization.