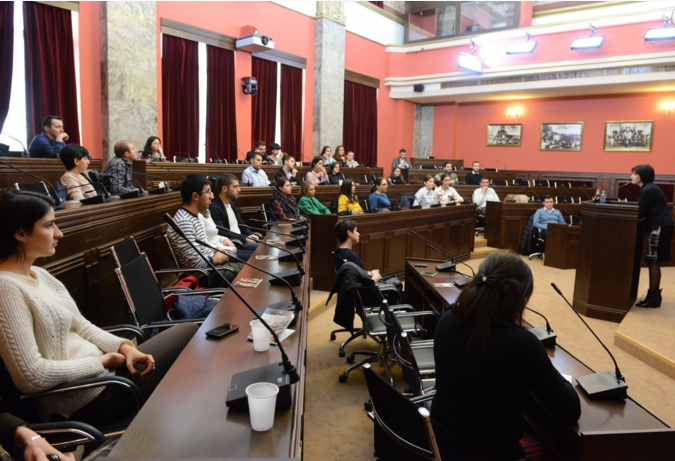 Participants of the training course were taken on the tour of Parliament, they saw the historic parts of the building and listened to its history. In addition, students inspected the exhibition on the theme of the Parliamentarianism. The exhibition included historic pictures of Georgian Parliament since 1918, the first constitution, the list and members of the Constituent Assembly of Georgia, etc.

After the tour of the Parliament, Tamar Kordzaia - Chairperson of the Inter-Factional Group of the Parliament of Georgia met the students. Tamar Kordzaia expressed her gratitude to the IDFI for its active work and support for increasing openness and transparency of the Parliament. MP talked about the importance of youth engagement in the legislative work since the laws the Parliament passes directly or indirectly affect every citizen indiscriminately at some point in life thus students should inform themselves on the work of the Parliament. Tamar Kordzaia encouraged students to be involved in legislative activities, told them that any Georgian citizen is allowed to attend the Committee Hearings, and at the Hearings regular citizens are free to express their ideas orally or written. Kordzaia highlighted the significance of Establishing a Permanent parliamentary Council on Open and Transparent Governance which will be responsible on monitoring parliamentary openness and citizen engagement efforts. 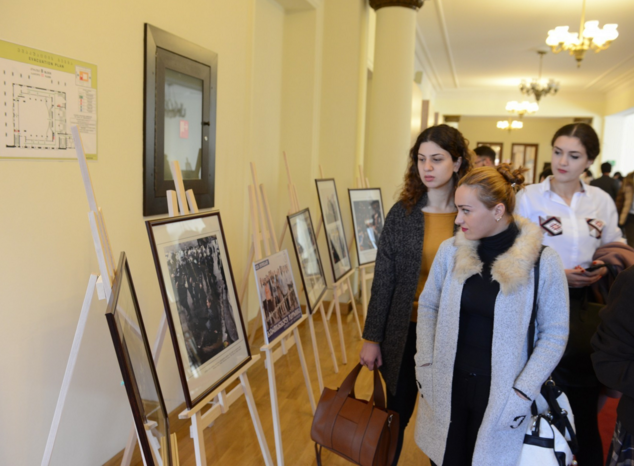 Students had an opportunity to ask questions to the MP about the topics of their interest within the open parliament. Thus, participants of the project discussed the Open Parliament Georgia 2015-2016 Action Plan, Majoritarian and Proportional Electoral Systems, the pros and cons of the transparency of the legislative work and recently adopted laws.

Visit at the Parliament of Georgia was a final stage of the competition "Open Parliament - Voice of Youth". Before the visit, students have attended a training course within the framework of the project. Training was conducted on following topics: Open Government Partnership, its mission and goals; Open Parliament Action Plan Georgia 2015-2016; and Significance of Civic Engagement in Public Policy. The speakers for the abovementioned topics were representatives of the IDFI: Director - Giorgi Kldiashvili, Project Coordinator - Davit Maisuradze and Analyst - Tamar Iakobidze. 42 students from the fields of social sciences, economics and law attended the course.

Students will have an opportunity to turn in their ideas and initiatives about how to make parliament more open and transparent and boost civic engagement in legislative activities before December 4th. Initiatives will be reviewed by December 18th, the day when the authors of the most relevant, credible and interesting commitments will be awarded.