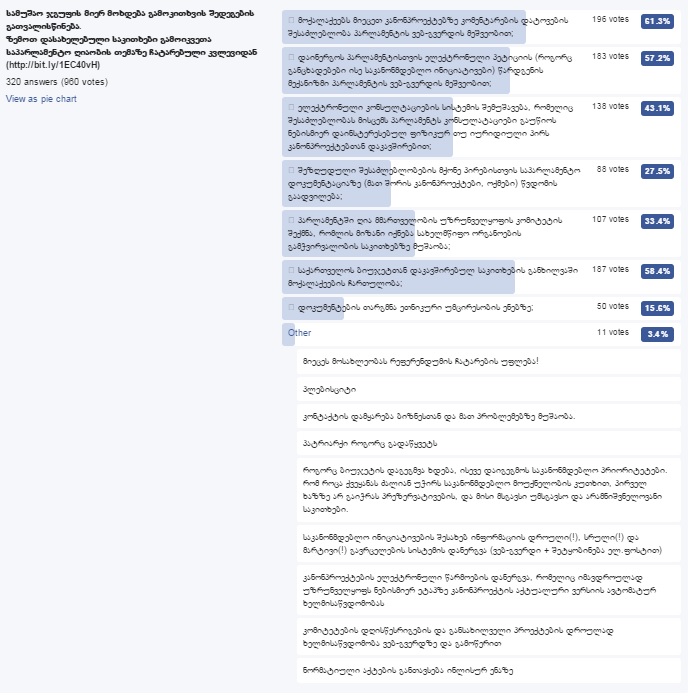 On February the 12th, on the basis of an order of the Chair of the Parliament of Georgia Parliamentary Inter-Factional Group was created to draw out the Open Parliament Georgia Action Plan. At the same time Working Group of NGOs and International organizations was created to consult Parliamentary Inter-Factional Group on the matters relevant to the Open Parliament Georgia Action Plan. Three meetings of the Working Group were already held.

Citizen participation is considered as one of the most important components to achieve openness. Public involvement is key to the openness, it’s one out of the five main priorities set to achieve the parliamentary openness. For this purpose IDFI held a survey between 29th of April to 19th of May. Respondents chose 3 most important recommendations out of 7, which arose as a result of research carried out in regard of Parliamentary Openness.

A lot of the expressed opinions were very interesting. 61.3% of respondents thought that, ability to leave comments on draft legislation is crucial. Also participation in budget planning (58.4%) and implementation of the mechanism of e-petition (57.3%) was voted as very important as well.

It should be noted, a survey was read by 1280 person, while 25 % of them - 320 users participated in the survey. 62% of participants were female, 38 % - male. Besides proposed options, respondent’s answers were: “Implementing the electronic processing of the bills, which also provides automatic access to the current version of the bill at any stage ", “availability of the agendas of Committees and Draft Bills on the web-page of the Parliament of Georgia, also possibility of subscription of the Agendas and Draft Bills”, “availability of legislation in English language”. 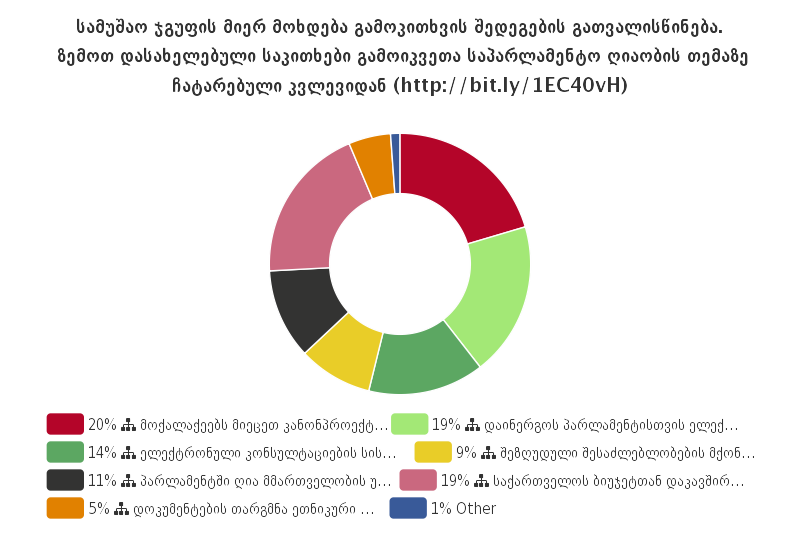 IDFI, as one of the member of working group, will try to deliver the recommendations of the citizens to Inter-Factional Group that will finally adopt Open Parliament Georgia Action Plan. As a member of the Working Group IDFI will support recommendations which had the the highest level of support from the voters.