Meeting with Students regarding Parliamentary Openness 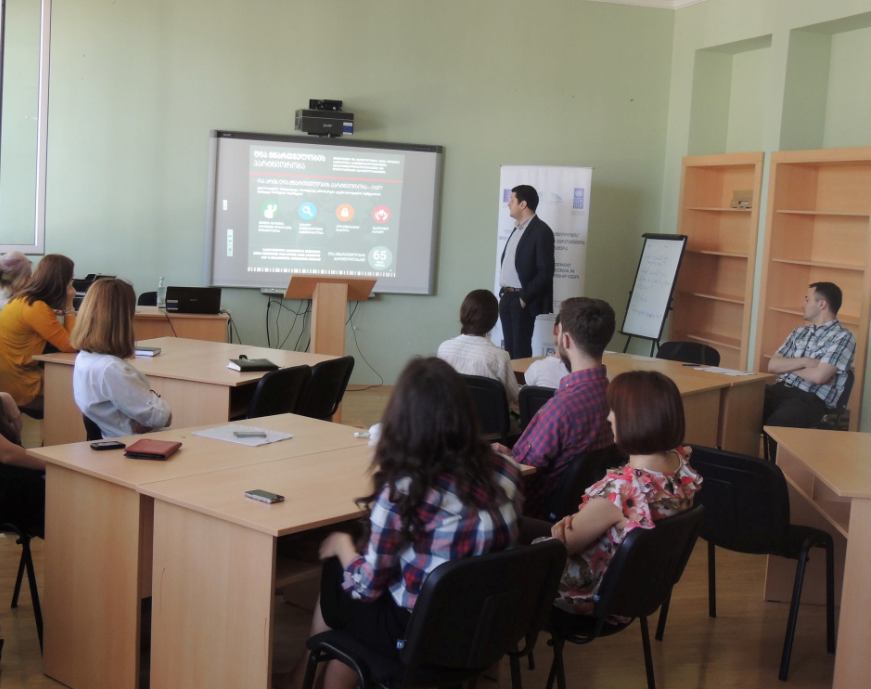 On June 12th, Iakob Gogebashvili Telavi State University, hosted a meeting in order to support the parliamentary transparency, openness and citizen participation within the scopes of the project - “Supporting Parliament of Georgia Involvement in Open Government Partnership”.

The project is implemented by the Institute for Development of Freedom of Information (IDFI) with the partnership of the Parliament of Georgia within the scopes of the European Union (EU) and the United Nations Development Program (UNDP) joint project "Strengthening the System of Parliamentary Democracy in Georgia".

The meeting was conducted by the representatives of the Institute for Development of Freedom of Information (IDFI), by the head of research - Giorgi Khistovani and Project Coordinator Davit Maisuradze. They spoke about the importance of the Open Government Partnership and implementation of the Principles of Parliamentary Openness in Georgia

Representative of IDFI Giorgi Khistovani talked with the students and university employees about the “ Open Government Partnership”. OGP is a multilateral initiative that aims to secure concrete commitments from governments to promote transparency, empowerment of citizens, fight against corruption.

Georgia became the member of “Open Government Partnership” in 2011 and is a member of the OGP-Steering Committee since 2014. In 2012 the Government of Georgia carried out the first Action Plan that was implemented in 2012-2013.

Giorgi Khistovani spoke about the commitments regarding the Second Action Plan of Parliament of Georgia in 2014-2015 , that includes 27 commitments. The Non-governmental and International organizations, along with IDFI are actively participating in this initiative. The Director of IDFI is a co-chair of the Open Government Forum in Georgia , along with the Head of the Analytical Department of the Ministry of Justice of Georgia.

Davit Maisuradze talked about Open Parliament Working Group. The members of Working Group are the non-governmental and international organizations.

The meeting was interactive, students asked interesting questions regarding the OGP.

IDFI plans to organize public discussions and meetings, in the future as well, within the scopes of the project, regarding the Parliamentary Openness.