Award Ceremony of the Competition Open Parliament - Voice of Youth 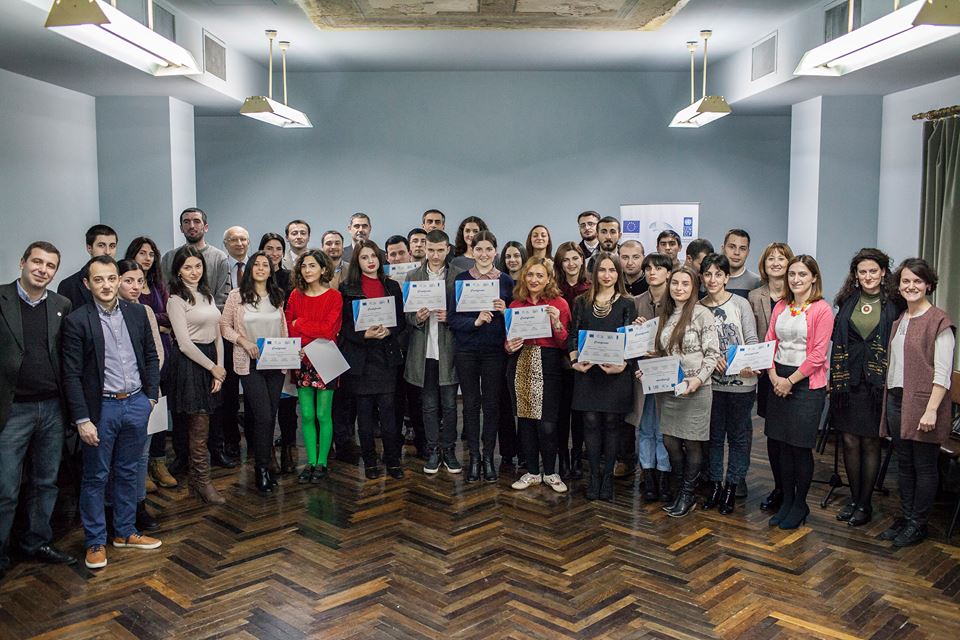 Institute for Development of Freedom of Information (IDFI) conducted a competition "Open Parliament - Voice of Youth" within the scopes of the project "Supporting Involvement of the Parliament of Georgia in Open Government Partnership." The project is funded in the scopes of European Union and the Parliament of Georgia Program: “Strengthening the System of Parliamentary Democracy in Georgia Project Document” which is implemented by the United Nations Development Programme (UNDP). 42 students from the fields of social sciences, economics and law attended the competition.

Participants of the competition "Open Parliament - Voice of Youth" attended the training course which covered the following topics: Open Government Partnership, its mission and goals; Open Parliament Action Plan Georgia 2015-2016; and Significance of Civic Engagement in Public Policy. The speakers for the abovementioned topics were representatives of the IDFI: Director - Giorgi Kldiashvili, Project Coordinator - Davit Maisuradze and Analyst - Tamar Iakobidze.

Students also visited the Parliament of Georgia in Tbilisi. They were taken on the tour of Parliament, saw the historic parts of the building and listened to its history. Moreover, participants inspected the exhibition on the theme of the Parliamentarianism. The exhibition included historic pictures of Georgian Parliament since 1918, the first constitution, the list and members of the Constituent Assembly of Georgia, etc. After the tour, Tamar Kordzaia - Head of the Inter-Factional Group of the Parliament of Georgia met the students. During the meeting she underlined the importance of youth engagement in the legislative work and encouraged students to be active in this sense, MP informed them that any Georgian citizen is allowed to attend the Committee Hearings while anyone can express their ideas orally or written at the Hearings. Furthermore, Kordzaia highlighted the significance of Establishing a Permanent parliamentary Council on Open and Transparent Governance which will be responsible on monitoring parliamentary openness and citizen engagement efforts. 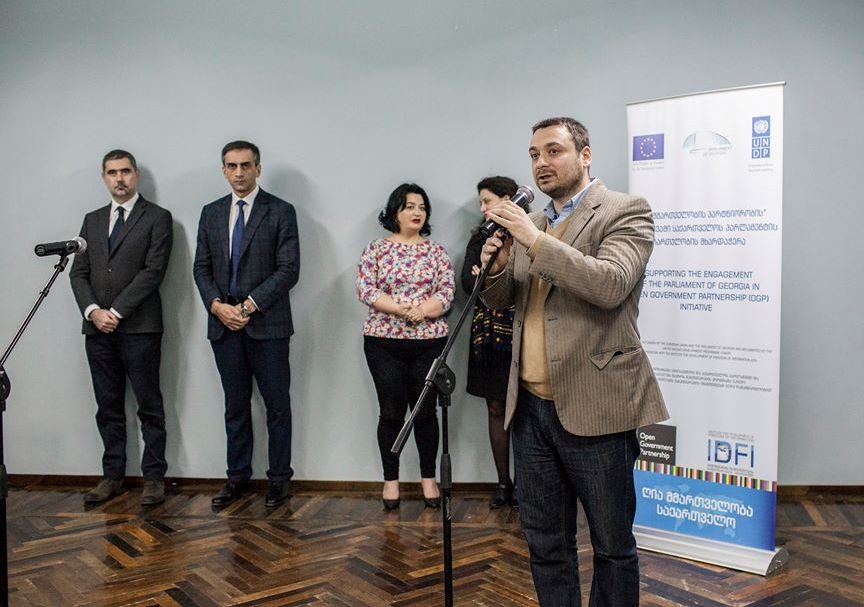 In the final part of the competition, students had an opportunity to elaborate their own initiatives on parliamentary openness and present them to IDFI. Institute received 15 initiatives and selected 5 outstanding ones. The author of the winner initiative - Nana Bagalishvili was awarded with the Kindle while other 4 winners: Ani Khachidze, Temur Ikoshvili, Merab Meladze and Giorgi Tsetskhladze were awarded with the Book Vouchers. Director of IDFI Giorgi Kldiashvili, the UNDP Governance Team Leader Gigi Bregadze, Programme Manager of Public Administration Reform at the European Union Delegation to Georgia Sophie Huet Guerriche and Member of Georgian Parliament Giorgi Kakhiani greeted the students and awarded them with the certificates and awards. It should be mentioned that the Inter-Factional Group of the Parliament of Georgia and the Open Parliament Georgia Working Group will discuss the winner initiative of the competition on the next joint meeting.

The initiatives which were selected by the IDFI voiced following ideas: MP should meet the population of each village of the Municipality that she/he represents in the Parliament, monthly. The footage of the meeting can be uploaded on the YouTube so that the other residents who could not show up at the gathering can watch it online. Moreover, the Bureau of the MP should create a Facebook page on which information about daily/weekly activities of the MP will be published. Facebook page will be interactive, for instance, if the commission with an MP of a particular municipality is discussing infrastructural topics, the information will be announced on Facebook in advance and a short online poll can be arranged on the topic. Platform - My voice to the MP - should be created, which would be a space for asking the questions via internet. The Parliament of Georgia should encourage/reward 5 MPs who have answered the biggest number of questions in a timely manner in the end of every month.

Another students offers Committee Hearings should be conducted in the regions of the country. At the meetings, local communities will have an opportunity to get to know to the work of the specific committee, review carried out activities and forthcoming challenges. Citizens will present and discuss problems of the community, thus, the committee members will have a first-hand information about the local situation. Such practice will contribute to strengthening a bilateral dialogue, will increase citizen involvement in the parliamentary activities and will build trust towards the legislative institutions. 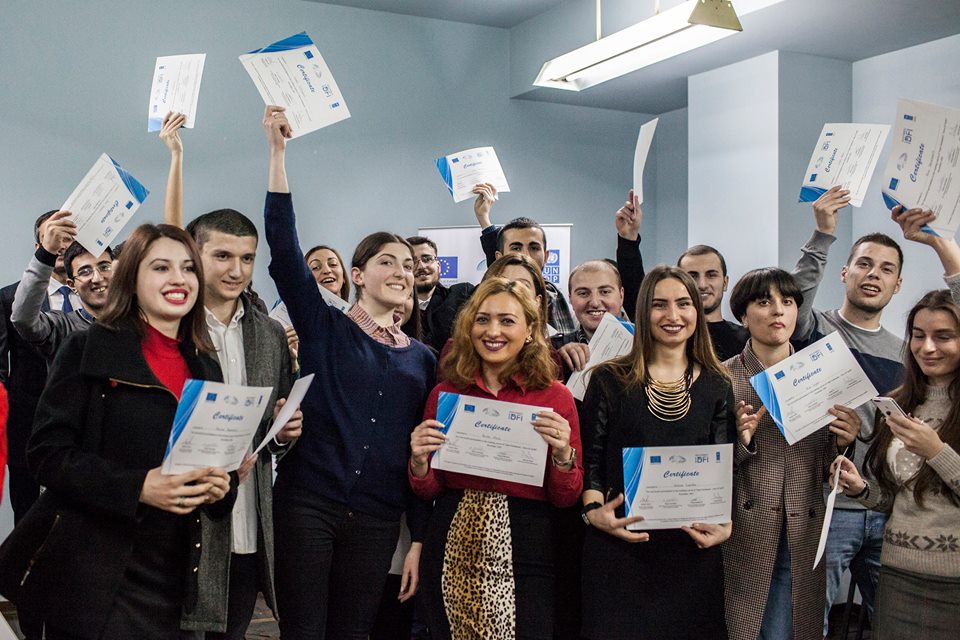 Third place holder thinks web-platform should be launched on which Georgian bloggers will work to raise awareness of youngsters on Open Government. Essays written by the students concerning Parliamentarism, democracy, ways of empowering civic society, etc. should be published on the web-page.

Another winner suggests web-page should be created to publish each MP's CV, election program, contact information (email, phone number), committee memberships, list of the working groups she/he takes part in, and membership of foreign country's friendship groups. It must be ensured that the information is constantly updated on the above-mentioned web-page. Information about the MP should further include: what specific initiatives has she/he presented, if those initiatives were carried out and if not, what was the reason, which initiatives she/he presented in order to implement the electoral program, what are the laws the MP has worked on, frequency of meeting with the population, initiatives the MP presented after meeting with the society, the list of laws she/he has voted for, whether the MP has attended the high-level conferences and summits, if the MP has made a speech at the Parliamentary Assembly of the Council of Europe and the transcript of speech.

Another participant of the competition thinks awareness of high school students should be raised on legislative activities and for this reason, students living in the regions of the country should have an opportunity to attend plenary sessions. Moreover, specific subjects should be taught at the schools which would increase popularity of the Parliament and students' interest in legislative activities.

The Institute for Development of Freedom of Information (IDFI) plans to conduct awareness raising activities in future as well.