Strengthening the System of Parliamentary Democracy in Georgia

Project Title: Strengthening the System of Parliamentary Democracy in Georgia

UNDP, in the frames of its EU funded Project “Strengthening the System of Parliamentary Democracy in Georgia”, supports the Parliament of Georgia in the involvement process in Open Government Partnership (OGP) through development and implementation of legislative openness action plan commitments. Since only a few parliaments worldwide were involved in the OGP initiative, such a decision was itself an innovative approach. To provide support to the Parliament of Georgia in being involved in OGP initiative, UNDP partnered with the Institute for Development of Freedom of Information (IDFI), the leading Georgian CSO engaged together with the Government in the OGP initiative at national level.

While the Georgian Parliament has succeeded in joining the OGP initiative through adoption of the OPG Action Plan in 2015, the implementation of the commitments undertaken under the Plan call for an intensive engagement of the Parliament in this exercise. Although the Plan is drafted for the period of 2015-2016, yet only a few commitments have been carried out, mostly due to the limited human and financial resources available at the Parliament. On one hand, Parliament requires support in overall monitoring of the process; and, on the other hand, the actual implementation of a selected number of commitments, those requiring additional resources, are needed. Another challenge is the upcoming parliamentary elections, when the newly-elected Parliament will need active support in familiarizing itself with the OGP initiative, forming anew the Parliament’s Permanent Council and following up on the existing commitments, as well as developing the next Action Plan for the period of 2017-2018. Georgia will be co-chairing OGP in 2016-2017 and taking Chairmanship in 2018, the Global Summitt will be held in Georgia. Parliament of Georgia as a key actor in OGP will be an important part of the event and it will need a substantial support both in expertise and organizational issues.

The programme contributes to UNDPs overall programme aim to establish the Georgian Parliament as a credible institution with a greater role in national policy-making and European integration.

1. Support the activities of the Permanent Parliamentary Council on Open and Transparent Governance

1.1. Support the Permanent Parliamentary Council on Open and Transparent Governance during the Transition Period

1.2. Increase the capacity of the Secretariat of the Council (Speaker’s Cabinet)

1.3. Supporting the process of drafting the OPG Action Plan (the second one)

1.4. Prepare a study about the issues and new trends of Parliamentary Openness

1.5. Facilitate Public Consultations during the Elaboration Process of the Action Plan

1.6. Promote peer exchange and international partnerships between Parliament of Georgia and other OPG member parliaments

1.7. Presentation of the Interim Results of the Action Plan (The first and the second action plans)

2. Support the Parliament of Georgia in Implementation of the selected commitments of the OPG Action Plan 2015-2016

2.1. Supporting the Council in preparing Speaker’s Orders and advocating for amendments in Rules of Procedures of the Parliament needed for implantation of the taken commitments in OPG Action Plan (2015-2016).

2.2. Introduction of the system of public consultations on draft legislation (Action Plan Commitment 1.1.)

2.7. Elaborate the Concept and the Budget for improving the access for the people with disabilities to the Building of the Parliament of Georgia in Tbilisi

3.1. Raising the Public Awareness about the Parliamentary Openness and the Implemented Commitments of the Action Plan

3.2. Support the Parliament of Georgia to plan, organize and implement the Legislative Openness Week in Georgia 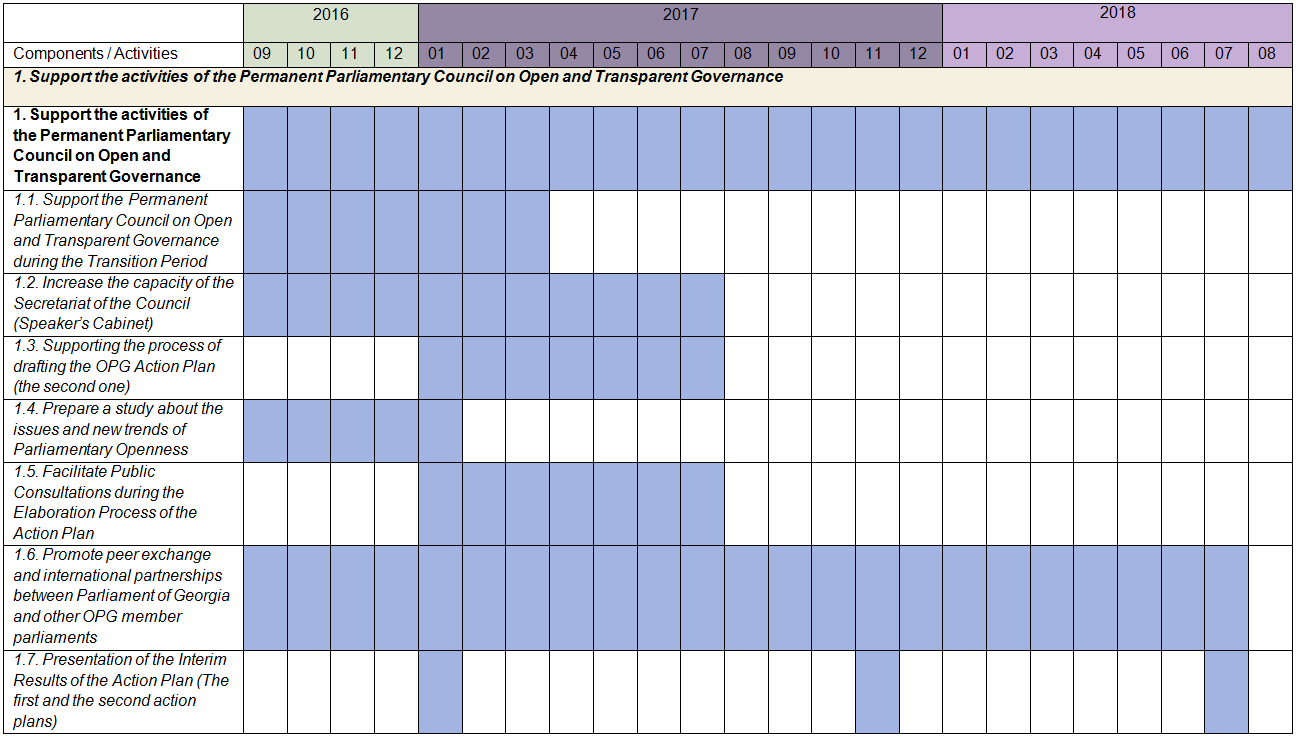 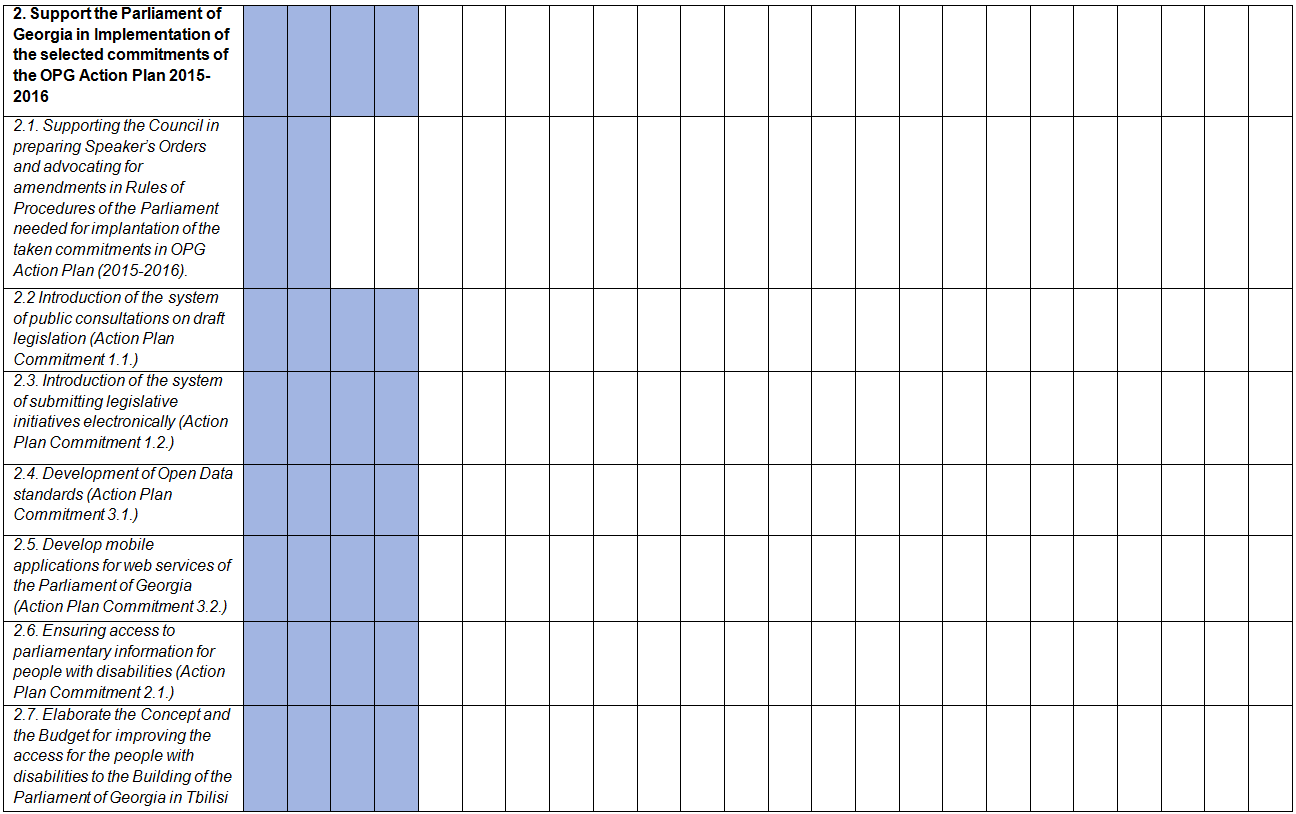