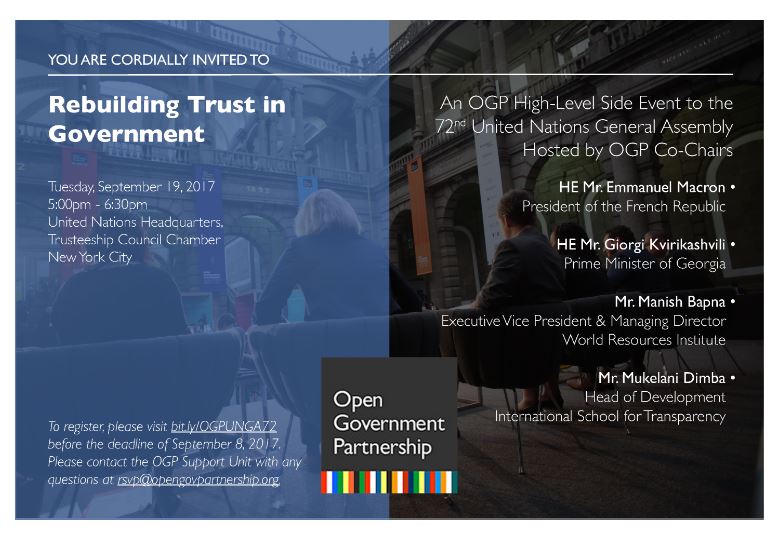 The official meeting of the Open Government Partnership’s (OGP) Steering Committee is planned to be heldon September 19, 2017, at the 72nd Session of the UN General Assembly. At this meeting, the Georgian Prime Minister Giorgi Kvirikashvili will officially take over the OGP chairmanship from the French President Emmanuel Macron. The Prime Minister will also share Georgia’s vision as a chair of the Open Government Partnership.

Within its term as the OGP chair country, lasting from October 1, 2017 to  October 1, 2018, Georgia will work to guide OGP activities of and will host the Open Government Partnership’s Global Summit in the second half of 2018.

Georgia became a member of the OGP Steering Committee in August 2014. In May 2016, the country, along with France, became the co-chair of the Partnership. Becoming the OGP chair is a result of successful efforts of the Georgian public and civil sectors towards cooperation, forming of a democratic society, and ensuring accessibility and transparency of information. Also at the event, Mukelani Dimba, Executive Director of the Open Democracy Advice Center (ODAC), shall become the co-chair of OGP.

In preparation for the event, the Georgian Prime Minister Giorgi Kvirikashvili published an open letter titled Getting Things Done for the People, with the People – on the OGP official website.

“Georgia is a small country with a not-so-long history of independence. But it has a solid record of accomplishment with reforms that have changed the way citizens interact with the government. OGP success stories have unlocked new opportunities, not only at the national but also international levels. It is our government’s honor to be trusted to serve as the next chair of OGP and contribute to a future for a powerful global movement for openness and deeper democracies. Now is a remarkable time for the Partnership and we will work with our partner countries and civil society to ensure people’s opportunity to influence government decisions that affect their daily lives.” – the letter reads.

Giorgi Kvirikashvili also defined the main vision and goals of Georgia for its term as chair of OGP, namely:

The Open Government Partnership (OGP) was launched on September 20, 2011 at theUN General Assembly Meeting by the Presidents of USA and Brazil. As of today, it is composed of 75 member countries. The Partnership is a multilateral international initiative that aims to fight corruption, secure transparency, effectiveness and accountability of governments and harness new technologies to strengthen governance.

In order to accomplish thesegoals and oversee the Partnership’s activities, a Steering Committee was formed, which is composed of government and civil society representatives. With the help of subcommittees and thematic groups, the Steering Committee provides guidance and main directions of OGP. It also supervises the fulfillment of commitments undertaken by member states and generally controls the proper functioning of OGP.

The Steering Committee is governed by a Chair, Deputy Chair and two representatives of civil society. Georgia joined OGP in 2011 and presented its first Action Plan (2012-2013) in 2012. Since then, with active involvement of civil society representatives, the country has been actively supporting the implementation of fundamental OGP principles. As of today, Georgia is implementing its third Action Plan (2016-2017).

One of Georgia’s initiatives within the framework of OGP was the creation of the Open Government Georgia’s Forum, which oversees OGP related activities carried out by the Georgian government and facilitates cooperation with civil society. The Forum is a permanent coordination mechanism and ensures dialogue and cooperation between state institutions and civil society representatives. The Forum is co-chaired by the Institute for Development of Freedom of Information (IDFI) and the Ministry of Justice of Georgia.

“IDFI’s efforts helped to bring OGP to a greater level in Georgia and goes without saying that Mr. Kldiashvili’s role in this process has been critical. Giorgi Kldiashvili is one of the biggest OGP advocates not only in Georgia but also in Europe, Asia and Pacific regions. As the co-chair of the OGP Georgia Forum, chair of the Open Parliament Working Group and member of the National Anti-Corruption Council, Giorgi is one of the leading civil society activists advocating for transparency, accountability and governance reform. He has demonstrated a rare ability to be involved in the co-creation process with public institutions while at the same time provide effective oversight over their commitments. Giorgi is one of the few civil society representatives providing leadership as well as daily substantive input to the open government process in Georgia. Transparency and accountability in various sectors are highly important for Mr. Kldiashvili….The background, expertise, leadership and advocacy experience make Mr. Kldiashvili an excellent candidate for the position of OGP Steering Committee Member.” – states Niels Scott in his letter.

Follow the live on the OGP Steering Committee meeting at the 72nd Session of the UN General Assembly here.