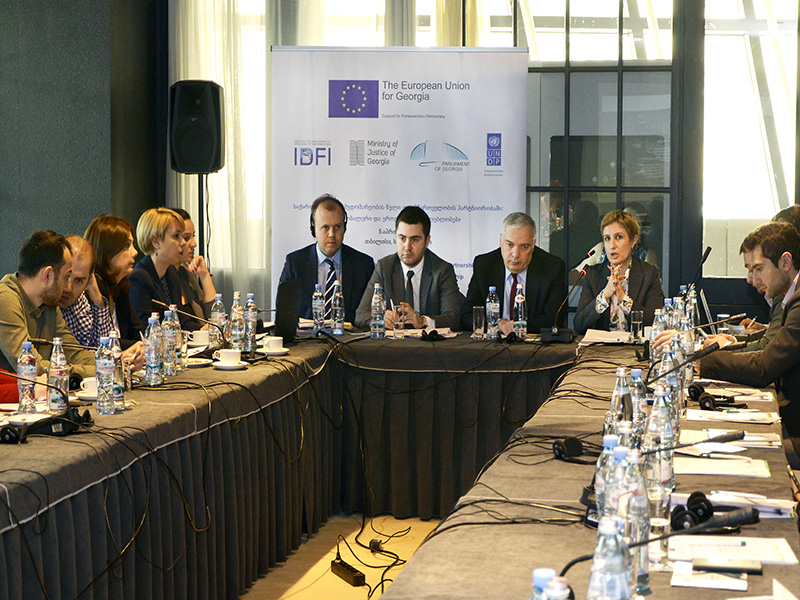 The workshop was to discuss Georgia’s vision, plans and expectations as the country assumes the chairmanship of the Open Government Partnership (OGP) Steering Committee in October 2017.

The meeting brought together key stakeholders involved in the OGP process in Georgia, including the Government of Georgia, Parliament of Georgia, Tbilisi City Hall, civil society and international organizations.

The event opened with welcoming remarks from Aleksandre Baramidze, Acting Minister of Justice of Georgia, and Irina Pruidze, Chairperson of the Permanent Parliamentary Council on Open and Transparent Governance.

“This event is of great importance and honor for a small country like Georgia. We plan to work more actively and improve our results in implementing OGP ideals in Georgia,” – Aleksandre Baramdize.

According to Irina Pruidze, “Georgia’s chairmanship of OGP greatly increases the responsibility of the Georgia and especially its Parliament. We have started working on the Open Parliament Action Plan and can already name the most important commitments that will be included in it. These commitments are: creating a code of ethics; drafting a concept of civil society development (to be implemented by a special working group); improving the content of explanatory notes; making the Parliament building and website accessible to people with disabilities.”  “In parallel to this, we work actively to raise the public’s awareness about OGP. In this process, I think, it is necessary to have good coordination among members of the Council as well as between fractions of Parliament. Finally, the Parliament and the Government should also cooperate  to implement OGP principles.”

This was followed by a discussion on strategic priorities for the chair year led by Joe Powel and Paul Maassen, which focused on good practices from the previous OGP chairs and the role of civil society in this process.

During his presentation, Joe Powel stated that “it is a big opportunity and responsibility of Georgia as a country, not just for the government during the chair year of OGP. Georgia is the 8th chair of OGP, and the first non founding country, which is a great howner. Georgia won a competitive election against other countries to be selected.”

According to Joe Powel, there are a number of opportunities for Georgia as a chair of OGP. “This is a seventy-five-country organization, so, firstly, it is a political opportunity for Georgia to lead a big coalition of governments. The second opportunity is to showcase the best practice and results that Georgia has achieved in recent years. And the third is that there will be a huge international spotlight on Georgia. Georgia had a great success as a member of OGP. Therefore, we believe that the country understands its opportunities as a new Chair of this organization.“

The discussions were moderated by – Zurab Sanikidze, Head of the Analytical Department of the Ministry of Justice, and Giorgi Kldiashvili, Director of the Institute for Development of Freedom of Information (IDFI).

“We think that electing Georgia as chair of OGP is not only a big challenge but also a big achievement for our country. I want to thank all donor organizations whose involvement and partnership will help us to achieve great results,” - Giorgi Kldiashvili.

Georgia joined OGP in September 2011. Since then, the Georgian Government together with civil society organizations has implemented a number of initiatives to promote transparency, empower citizens, and combat corruption with the overall goal of strengthening good governance in the country. In April 2015, the Parliament of Georgia endorsed a Declaration on Parliamentary Openness and Memorandum with international and non-governmental organizations, thus making Georgia the first country in the region to promote legislative openness.

In May 2016, Georgia, together with France, became a Co-Chair of the OGP Steering Committee, an executive, decision-making body which develops, promotes and safeguards the values and principles of OGP as well as establishes ideas, policies and rules of the partnership and oversees its functioning. The Steering Committee consists of 22 members - 11 from government and 11 from civil society. As of October 2017, Georgia will assume the Open Government Partnership (OGP) chairmanship for a year.

The meeting was organised by the co-chairs of the Open Government Georgia Forum – the Ministry of Justice of Georgia and Institute for Development of Freedom of Information (IDFI), in cooperation with the Parliament of Georgia and with support from the European Union (EU) and United Nations Development Programme (UNDP).