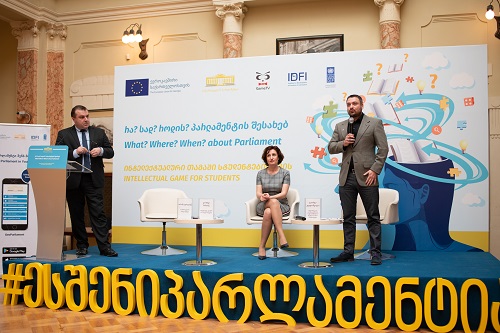 Deputy Speaker of the Parliament, Zviad Dzidziguri; Head of the United Nations Development Programme (UNDP) in Georgia, Louisa Vinton; and Deputy Head of the Delegation of the European Union to Georgia, Carlo Natale, presented awards to the winners of “What? Where? When?” -- a quiz designed to test young people’s knowledge about the Parliament and its role in Georgian democracy.

The winner of the game became the team of youth from Tbilisi State University, while the second and the third places were taken by the Tbilisi Medical University (II) and Tbilisi Free University (III).

The quiz was part of a broader program aimed at raising awareness about Georgia’s Parliament and encouraging citizens to take an active part in the legislative process. Over 100 students from 18 Georgian universities tested their knowledge about the Georgian Parliament and parliaments other countries, including less-known historical facts and information about prominent parliamentarians.

Irina Pruidze, Chairperson of the Permanent Parliamentary Council on Open Governance, and Giorgi Kldiashvili, Executive Director of the Institute for Development of Freedom of Information (IDFI), addressed the participants of the quiz with welcome remarks. 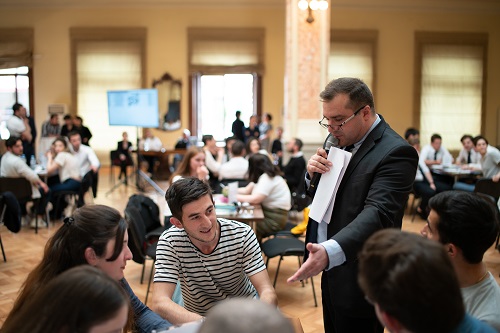 The event was organized by the Parliament of Georgia, with the support of the European Union (EU) and UNDP in cooperation with IDFI.

"Youth involvement and awareness about the current legislative processes in the country is necessary. As part of the Open Parliament initiative, a number of new instruments and e-services were created by the Parliament of Georgia with the support from donors as well as local and international organizations, which will enable citizens to take an active part in parliamentary work. "- Giorgi Kldiashvili, Executive Director of the Institute for Development of Freedom of Information (IDFI) pointed out in his welcome speech with the youth.

“Democracy is stronger if all voices in society are heard,” said Louisa Vinton, UNDP Head in Georgia.

“We’re confident that getting young people interested in parliamentary work will attract more talent and energy to the democratic process and give them a vehicle to realize their ambition to make the world a better place.”

Carlo Natale, Deputy Head of the Delegation of the European Union to Georgia, stressed that citizen, especially youth, participation is vital for achieving a fully-fledged parliamentary democracy. 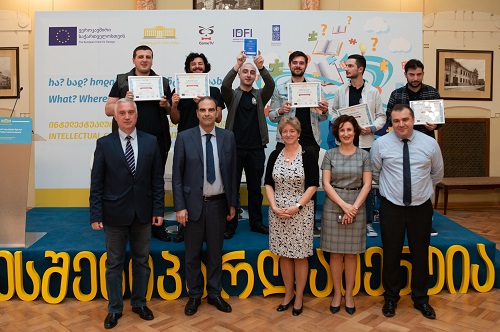 “The European Union greatly supports Georgia in reforming parliament and pays special attention to the increased participation of youth in the parliamentary work,” Carlo Natale said.

The “What? Where? When? about Parliament” quiz is part of a larger campaign “Parliamentary Day at Universities,” initiated and organized by the Parliament of Georgia with the support of the EU, UNDP and IDFI. The campaign is built around a series of discussions in over 15 educational institutions throughout Georgia covering the role and functions of the Parliament and Georgia’s achievements on the path to legislative openness.