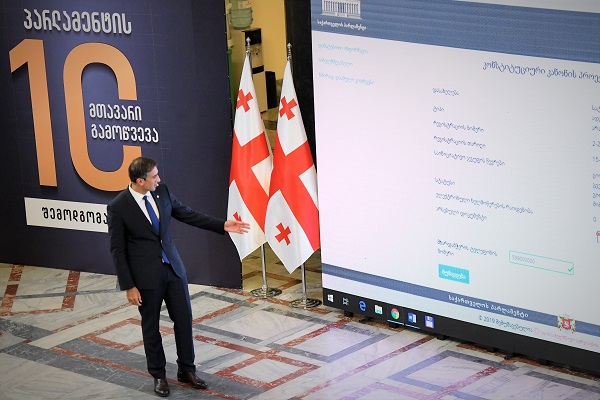 On October 15, Parliament of Georgia held the presentation on placing the e-signatures on legislative initiatives and petitions.

The implementation of this novelty comes from the recommendation of the Institute for Development of Freedom of Information (IDFI), initiated in the first action plan of the Open Parliament Georgia Action Plan 2015-2016, commitment 1.2, which considered submission of legislative proposals and initiatives to the Parliament of Georgia electronically, implementing its support mechanism through the official website of the Parliament of Georgia.

From April 2018, in accordance to the amendments initiated in the Rules of Procedure of the Parliament of Georgia, citizens of Georgia have the legal opportunity to collect e-signatures for supporting the draft law or address chairman of the Parliament of Georgia with the electronic petitions concerning a state or general problem. At the same time, citizens of Georgia have an opportunity to publish the draft constitutional law of Georgia on the Parliament website, to collect signatures of its supporters using the website. The process of collecting signatures electronically does not preclude collection of signatures in the written form, even though introducing modern technologies will help to increase the involvement of citizens in parliamentary activities. 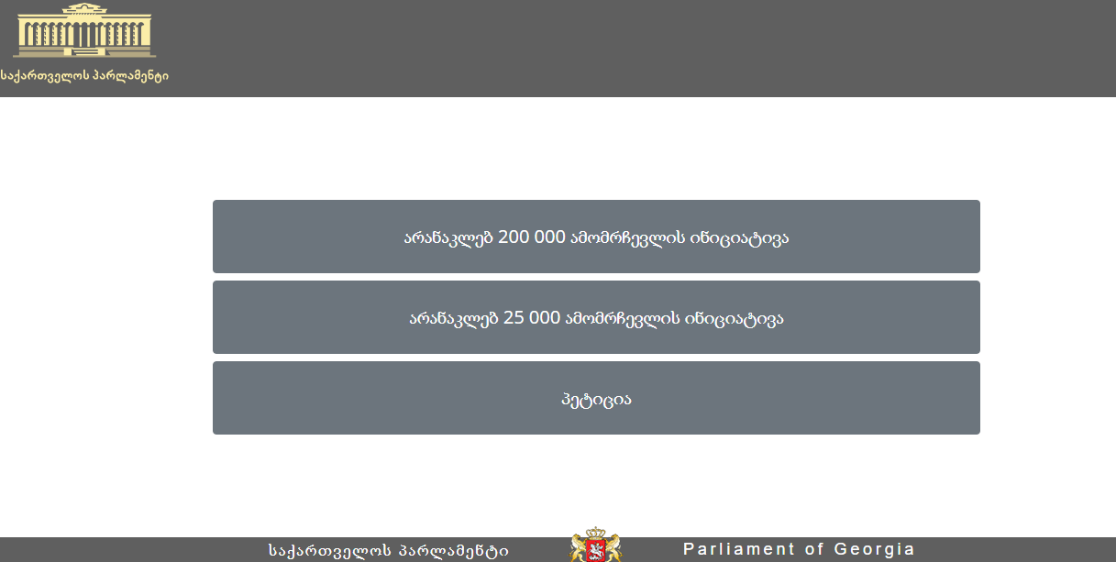 Supporters' signatures can be collected by filling out specially designed written forms as well as electronically to submit a draft constitutional law of Georgia as part of the initiative “not less than 200 000 voters”.

Web-page of the Parliament of Georgia defines the submission of such procedures in details. Currently, there is one draft constitutional law registered on the Parliament website, as one can see the process of collecting signatures has already been completed. 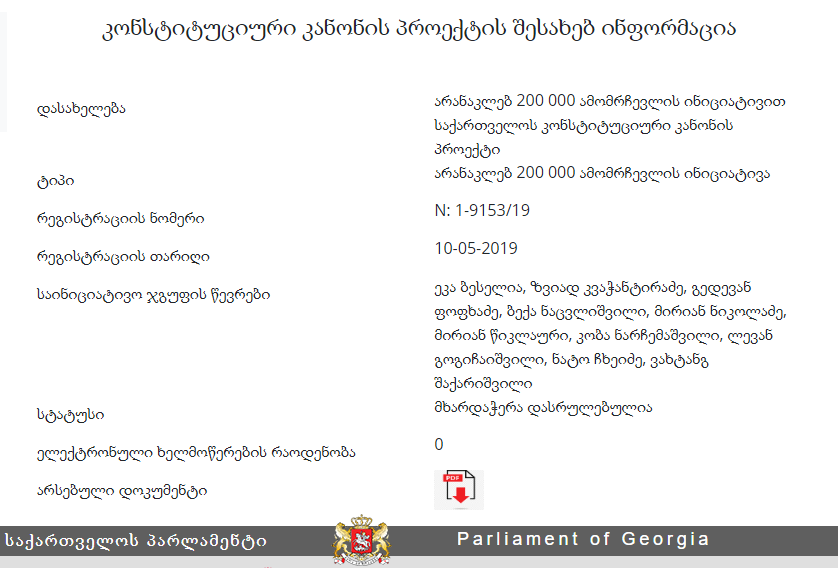 Website of the Parliament of Georgia, provides the possibility of collecting supporters' signatures electronically to submit a draft law. According to the International practice collecting e-signaturesis a simplified and accessible form to support a draft law.

Qualified electronic signatures can only be executed if the deadline for collecting supporters' signatures has not expired. Herewith, a voter can support a draft lawonly once.

Submitting a petition to the Chairperson of the Parliament of Georgia electronically is worth of noting, as the simplicity of the process will facilitate to increase the number of submissions as well as improving civil involvement in the parliamentary activities.

The petition is an electronic or written document signed by at least 300 persons concerning a state or general problem.

Both electronic and written petitions will be placed on the website of the Parliament of Georgia, except for a written petition that has been supported by at least 300 persons at the time of submission.

Any citizen will be able to support a petition electronically, within one months after publishing on the Parliament website, petition can be only supported once, indicating name and surname of the individuals. 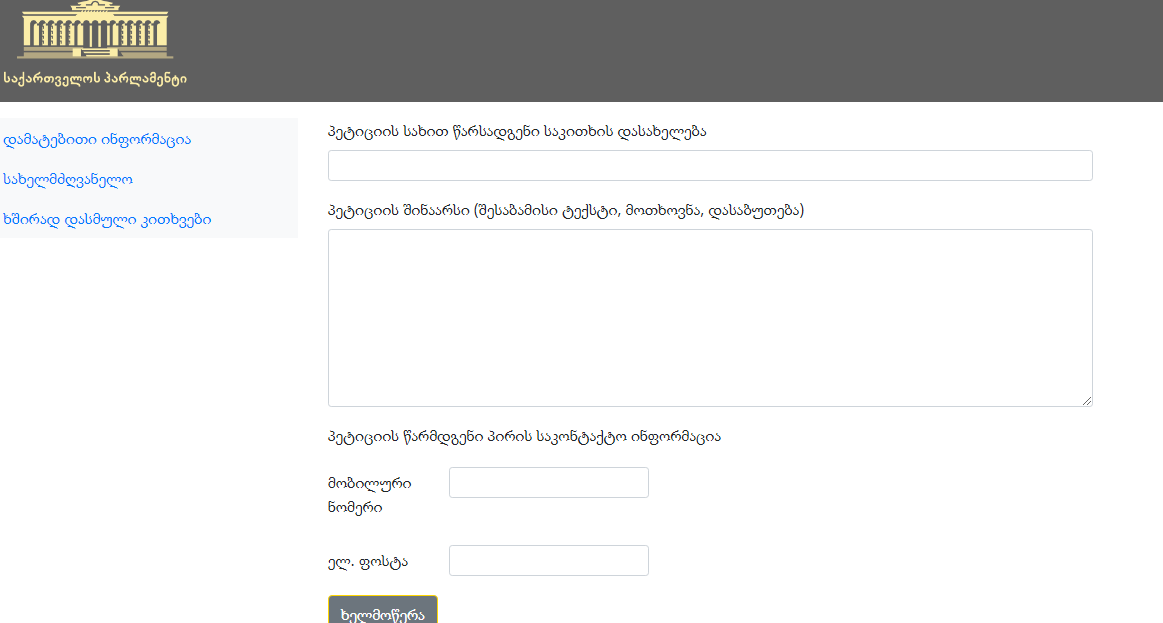 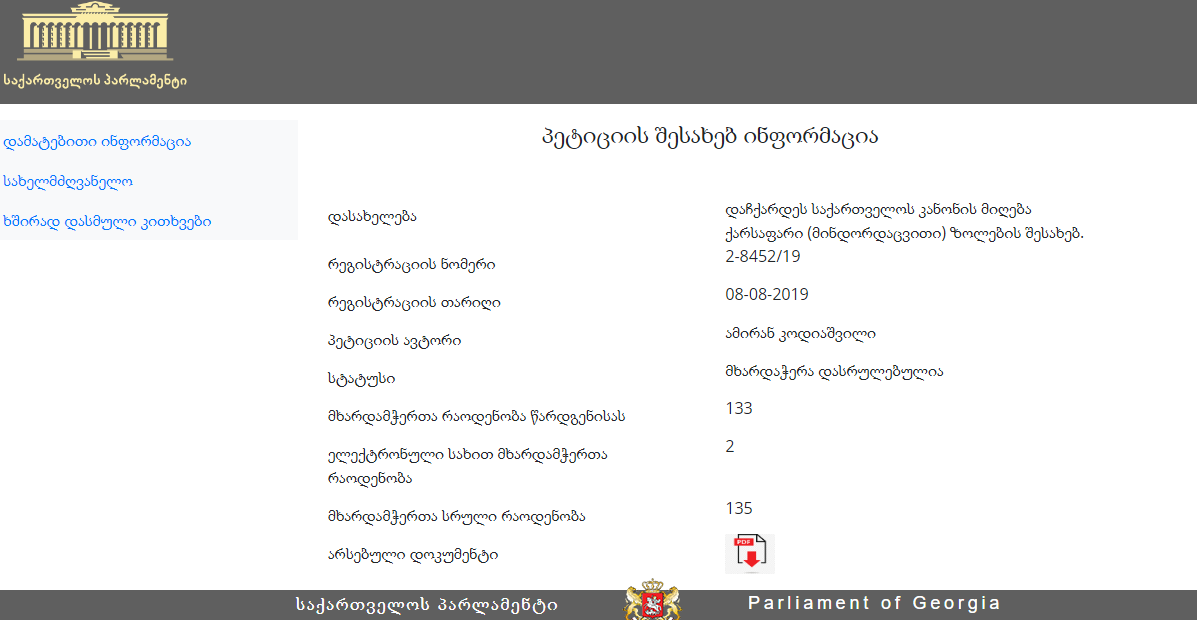 From 2015, Institute for Development of Freedom of Information (IDFI), with the support of EU and UNDP, is actively involved in the activities of parliamentary openness within the scopes of OGP. IDFI, as the member and Chair of the consultative group at the Open Governance Permanent Parliamentary Council actively participates in the elaboration and implementation process of the open parliament action plans (4 action plans).