Project Title: Strengthening the System of Parliamentary Democracy in Georgia

In September 2011 Georgia joined Open Government Partnership (OGP) Initiative. OGP is a multilateral initiative that aims to secure concrete commitments from governments to promote transparency, empower citizens, fight corruption, and harness new technologies to make government more open, effective and accountable, leading to more efficient use of public resources, innovation and inclusive growth. It was launched by eight founding governments, including the United States and the United Kingdom. UNDP is an active supporter of the OGP globally, especially in the component of Legislative Openness.

Among 65 OGP member countries, at the onset of its membership, Georgia was scored among the highest (15 out of 16 maximum) on budget transparency, access to information and asset disclosure. As an OGP member state, Georgia dedicated itself to transparent and collaborative processes in public service, state procurement, public finances, and administration of justice, public participation and developing innovative technologies. Within almost three years Georgia managed to adopt and implement the first Action Plan (2012-13), participate in the OGP Steering Committee elections and adopt the second Action Plan (2014-15). In September 2014, Georgia was elected as an OGP Steering Committee Member for two years.

As the Government of Georgia had made progress in terms of engaging and fulfilling OGP commitments, UNDP, in the frames of its EU funded Project “Strengthening the System of Parliamentary Democracy in Georgia”, decided to support the Parliament in engaging in the similar process, through developing the legislative openness action plan. Since only a few parliaments worldwide were involved in the Initiative, such a decision was itself an innovative approach. To provide support to the Georgian Parliament, UNDP partnered with the Institute for Development of Freedom of Information (IDFI), the leading Georgian CSO engaged together with the Government in the OGP initiative at national level.

The process was launched in December 2014 and in less than a year, a remarkable progress was achieved. More particularly: on 12 February 2015, the Parliament officially announced its readiness to engage in the OGP and by the Order of the Speaker of the Parliament formed an Inter-Factional Group. Consisting of 11 Members of Parliament from majority and minority factions, the Group was tasked to develop the Open Parliament Georgia (OPG) Action Plan. To ensure close collaboration with the civil society, leading local and international organizations were invited to participate in the process through signing the Memorandum of Understanding with the Parliament on 30 April 2015. On the same day, the Parliament ratified the Declaration on Parliamentary Openness. After several rounds of meetings and workshops, the Inter-Factional Working Group and the Open Parliament Georgia Working Group (composed of local and international organizations) produced final draft of the OPG Action Plan, which was adopted by the Bureau of the Parliament on 17 July, 2015.

The main purpose of the Action Plan is to ensure the openness of the Parliament in accordance with the OGP principles and Declaration on Parliamentary Openness. The Action Plan, composed of 18 commitments, is setting up specific milestones to push parliamentary openness forward: (1) Public involvement, including for opportunities to comment on draft bills, present legislative proposals and attend plenary sessions; (2) Access to information, including for publishing draft bills in an editable format so that anyone can comment and adapting the Parliament’s web resources to the needs of people with disabilities; (3) Technology and innovation to make access to the published documents as easy as possible; (4) Accountability, including for establishing a permanent Parliamentary Council on Openness and Transparency and active cooperation with civil society.

Overall Objective
Parliamentary openness and citizen engagement in the legislative activities of the Parliament of Georgia enhanced.

Specific Objectives
1. Facilitating the effective functioning of the Permanent Parliamentary Council on Open and Transparent Governance
2. Supporting the Parliament of Georgia in the implementation of the selected commitments under the Open Parliament Georgia Action Plan.

Expected End-Results
1. Permanent Parliamentary Council on Open and Transparent Governance functions effectively and is operational.
2. Concepts and/or draft projects of the selected five commitments under the Open Parliament Georgia Action Plan are elaborated and adopted by the Council. 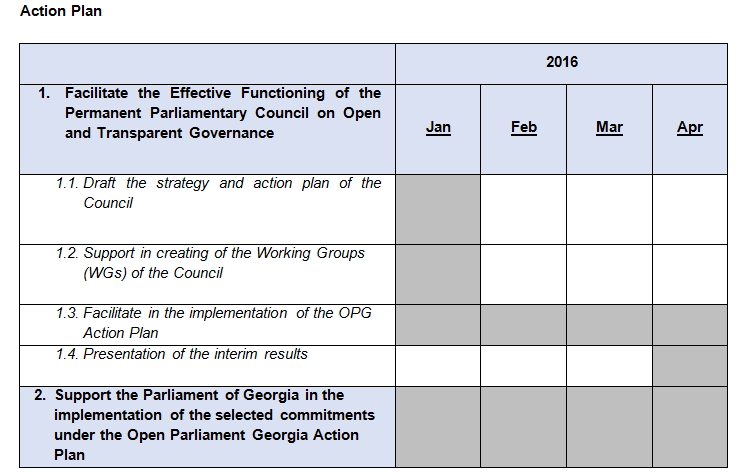