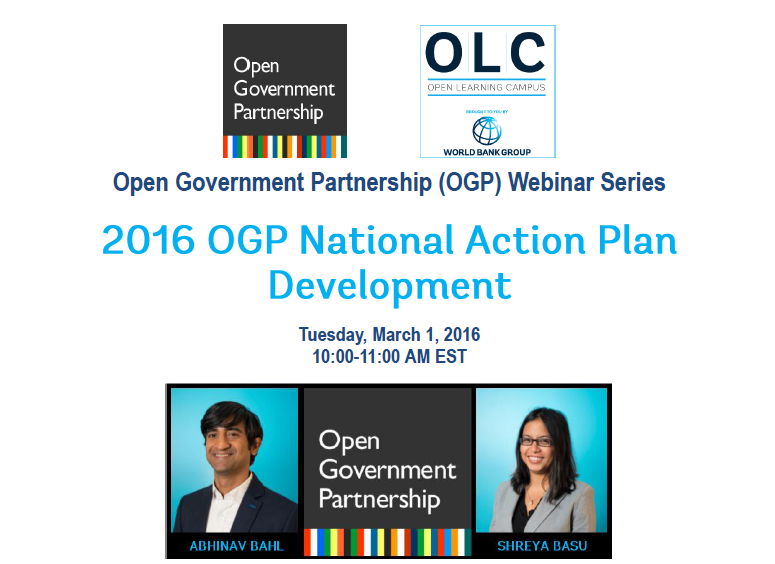 On March 1st, 2016, Webinar was held on “2016 OGP National Action Plan Development,” financed by the World Bank Group and the OGP Support Unit. Presenters of the Webinar: Abhinav Bahl, program manager of the OGP Support Unit and Shreya Basu, OGP regional coordinator for Asia-Pacific discussed how national action plans should be developed, what notions should guide the countries in the development process, and provided thorough recommendation for elaborating the stronger action plans in term of the format, process, and content.

Abhinav Bahl and Shreya Basu noted that it is useful to review the OGP Manual for outlining the format and structure of the action plan. The OGP Manual includes action plan development guidance and template, calendars, best practices and examples, self-assessment reports guidance, etc. It is important that during development of the action plan the government and SCOs are driven with the focus that the plan is innovative and properly addresses the local predicament, thus it is: Ambitious (commitments should stretch government beyond current state of practice), Responsive (plan must be reflective of public demand), and Relevant (the plan should address three principal pillars of OGP: Transparency, Accountability, and Public Participation).

Moreover, it is important to use the Action Plan Template which lays out format for milestones, commitments that action plan should be organized around. According to the representatives of OGP, less is more when it comes to the commitments and, therefore, it was recommended that the number of commitments range from 5 to 15. The smaller number of commitments will ensure that the stakeholders focus on quality rather than quantity and try to make the action plan hit the key points and reach out to as many ministries and entities as possible with multiple themes. The action plan must be written in plain language so it is clear, succinct and most important – action-oriented.

Participants of the Webinar were encouraged to be creative while developing the action plan and think bigger in terms of how the problems, local governments is dealing with, are related to the SDGs or the issues relevant on the international stage. Think about how the local action plans can be used to address the global issues, and advance the SDG implementation or monitoring of the implementation of the SDGs.

It was advised at the Webinar that while designing the commitments countries should learn from each other and most important – from the OGP best practices, since there are countries that are tackling similar problems. There are 328 commitments in all 2014-2016 action plans out of which there is small amount of high-quality commitments and thus, 22 starred ones; commitment of Georgia on “Political party financial declarations: Publish party financing data in accessible formats“ is one of the starred commitments. Another started commitment is of Ukraine “Access to communist era archives.” (Access on communist-era archives is provided in Georgia. Academy of the Ministry of Internal Affairs of Georgia took a responsibility laid out in the Open Government Partnership Georgia Action Plan 2015-2016 on classifying and publishing relevant documents. In the action plan, "commitment 24: Classifying the documents protected at the Ministry of Internal Affairs Archive and publishing" - initiated by the Institute for Development of Freedom of Information (IDFI), it is noted that MIA Academy which houses the archives of three Soviet bodies: the Committee for State Security, the Ministry of Internal Affairs and the Central Committee of the Communist Party of SSR Georgia, used to be one of the most closed and hardly accessible institute in the Soviet Times, as well as after Georgia gained independence. Due to high public and scientific-research interest towards the archives the MIA took the above-mentioned responsibility on classifying the documents according to a modern catalog system.) 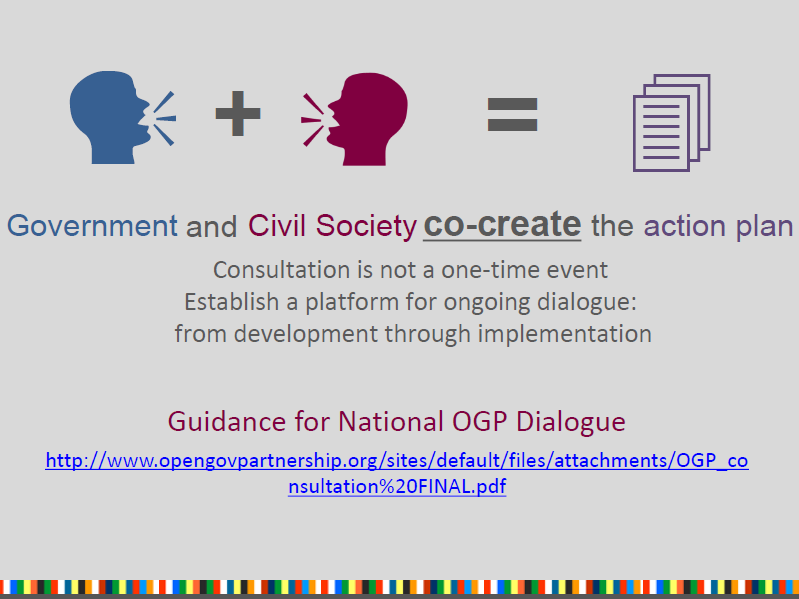 The presenters highlighted that governments should pay attention that they do not only consult with the civil society but actually cooperate and jointly address the issues while drafting the action plan and later, establish the required mechanisms for continues communication during the implementation process. It was mentioned that within the OGP cooperation of the government and civil society should be an ongoing process, when the OGP is a mean but achieve what they set to achieve and not an end itself. Moreover, as said at the Webinar, forums established for communication would ideally be managed both by the government and the civil society. The presenter noted that Georgia is a country where this is actually happening. The Open Government Partnership Forum active in Georgia is a multi-stakeholder forum which is responsible on developing the OGP national action plans and ensuring/monitoring the implementation process. The above-mentioned Forum is chaired both by the government representative and the Director of a local non-governmental organization – Institute for Development of Freedom of Information (IDFI). The Forum provides a platform for regular meetings of the individuals involved in the process, ensures intensive engagement of the government, non-governmental and international organizations, invites international and local experts to deliver talks, etc. The presenter of the Webinar advised the participants to contact Georgia for further guidance or recommendations for establishing an effective mechanism of communication between the government and the civil society.