Chairperson of the Parliament Discusses Plans for Increasing the Legislative Openness

David Usupashvili highlighted that the award was a result of a close collaboration of the MPs and the representatives of the SCOs. Within the scopes of the project "Supporting Involvement of the Parliament of Georgia in Open Government Partnership" supported by the UNDP and European Union and implemented by the Institute for Development of Freedom of Information (IDFI), Inter-Factional Group of the Parliament and the Open Parliament Working Group elaborated the Open Parliament Georgia Action Plan 2015-2016. The Action Plan encompasses 18 commitments based on the following principles of the OGP: Access to information, citizen engagement, accountability, technologies and innovation.

The Chairperson of the Parliament noted: "We have done a lot for increasing legislative openness and transparency. We are the champions in this field. It [the Champions Award] was truly a serious recognition of the work undertaken in the legislative activities and was a result of the close collaboration among the MPs and the representatives of the SCOs, which needs to be developed. By the end of December we established a Parliamentary Council which will work on these topics. The meetings of the Council will be launched soon as we have an action plan with ambitious commitments and we will have very good initiatives." 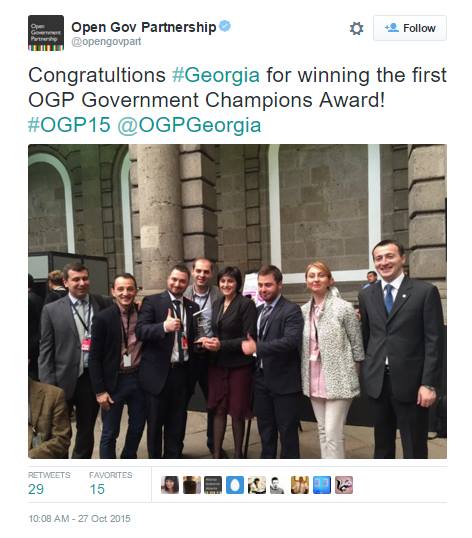