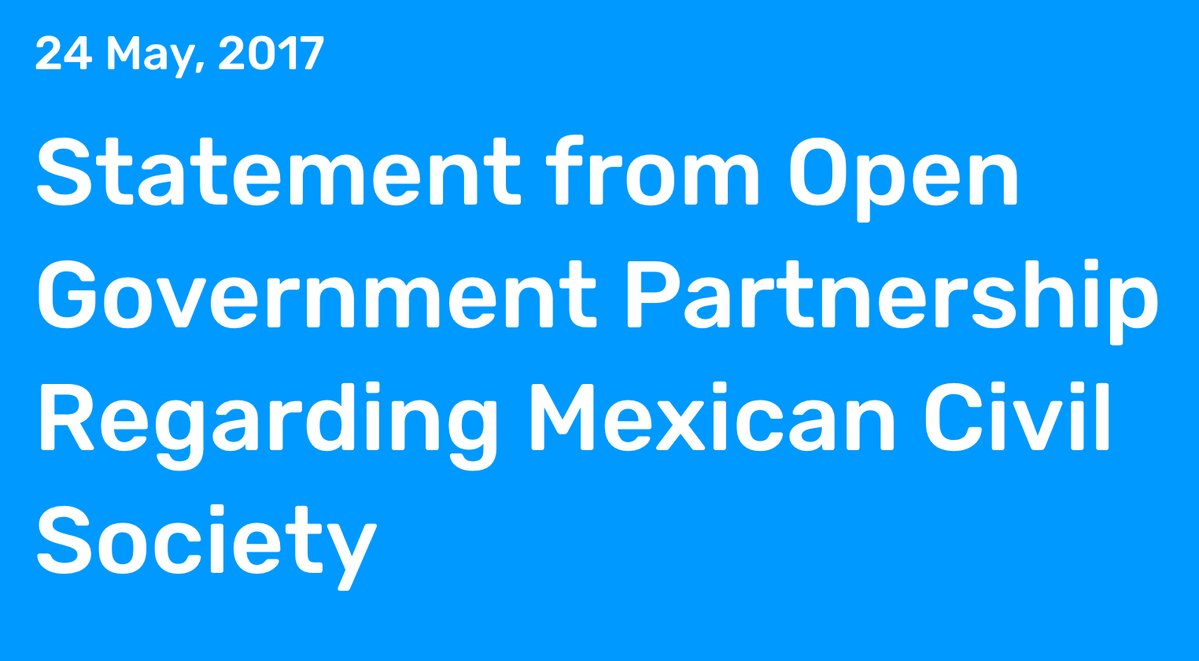 Mexico is one of the founders of the Open Government Partnership (OGP). The Mexican government and civil society organizations (CSOs) played an important role in furthering the OGP via successful reforms and awareness-raising on regional and international levels. In 2015, Mexico hosted an OGP global summit. Mexican reformers were a source of inspiration for many governments to fight societal problems with reforms through the OGP framework.

Today, the exemplary member of OGP faces severe challenges. One of the fundamental principles of this partnership – cooperation between government and civil society – was violated in Mexico. The government of Mexico, despite having implemented high standards of OGP, could not maintain progress, which endangers the open governance process in this country as well as every other state involved in the partnership.

On May 24, 2017, Mexican civil society organizations left the country’s OGP national platform. The reason for this decision was a report by an organization Citizen Lab that documented illegal surveillance of famous researches and public health advocates by the Mexican government. OGP member CSOs expressed their concern that the illegal surveillance of journalists, representatives of civil society, and activists was an ongoing practice in Mexico.

The incident took place in February 2017, after which CSOs demanded from the government (Federal Institute for Access to Information and Data Protection - IFAI) and other members of the national OGP platform, to take effective countermeasures. However, the Mexican government refused to respond for next three months.

OGP member CSOs unanimously decided to leave the national platform. In a letter to their partners, they stated that the national platform lacked the conditions for cooperation and dialogue, and that the continuation of the CSOs presence in the OGP mechanism and in the implementation process of the Mexican Third Action Plan was impossible. In addition to ignoring the issue of illegal surveillance, the organizations stated that political will for successful implementation of the Action Plan did not exist, because the government tries to modify and shorten previously agreed obligations.

The Mexican example proves how a country, exemplary in fighting corruption and implementing OGP, can find itself facing serious challenges due to inaction of the government. It is important that during this challenge all OGP countries maintain active involvement, and support democratic processes in Mexico, to avoid the weakening of implementation of OGP.

Mexican OGP Technical Tripartite Secretariat (STT) directs Open Government processes and makes related decisions. The Secretariat consists of three branches: one representative from government (Coordination of the National Digital Strategy), one from civil society (Transparencia Mexicana), and one from the Federal Institute for Access to Information and Data Protection (IFAI). The NGO’s participated in the creation of all three Mexican Action Plans.

According to IDFI’s assessment, the case of Mikheil Saakashvili is being considered in violation of the right to a fair trial