Mass Graves of Victims of Soviet Repression in Georgia

Identification of burials and remains of the victims of the Soviet-era terror is a demanding challenge for the post-Soviet countries. Many of these countries have started searching for such burial sites not at all recently, several mass burial sites have already been found and these countries have paid tribute to the repressed. There was no such precedent in Georgia as of yet, the search for burial sites and graves in the 1990s were largely in vain due to the destruction of archives and lack of information.

The Institute for Development of Freedom of Information (IDFI) has been working on Soviet repressions since 2009. In 2012 we published an article about Stalin's repressions of 1937-1938, where we tried to explain in detail how and where the executions took place. The database of more than 3600 persons from Stalin's Lists was created by the organization. The organization also works on identifying locations of mass burials.

According to the order of the Ministry of Defense of Georgia, part of the area of the banking base # 3, located at Pridon Khalvashi St. # 338  was transferred to the Georgian Patriarchate for temporary use. On this territory, 4 burial sites of around 150 persons were discovered, the victims of 1937-1938 repressions or the so-called Stalin’s List. With the consent of relevant services, the diocese was permitted to disinter the victims. On April 21, at 15:00, the remains of the victims will be given a proper burial on the territory of Batumi Military Base # 3.

The statement was accompanied by up to 50 photos showing the condition of the fossils, as well as several surviving items, including bullet cases and coins.

On the same day, organizations working on Soviet repressions expressed opinion, that the mass grave might not be of the repressed in 1930s at all, and it could have been the burial site of Turkish soldiers. This statement was followed by the response of the Batumi and Lazeti Diocese on April 8:

"It is noteworthy that all skulls had traces of bullets in the area of the occipital bone. There are women among the victims. Items discovered in the tomb, namely, Soviet coins of the 1930s show that this burial belongs to Soviet citizens and not to Turkish soldiers. No military items were found, and the victims were wearing civilian clothes and shoes. In addition, a cross was found, which clearly proves the existence of Christian remains in the burial site.

DNA analysis is associated with a vast expenses, hence DNA bases are created by participation of the Ministry of Healthcare, which will allow us to analyze and identify the descendants of the victims at any time.

Specialists can examine the discovered inventory, including bullets and clothes, at will.”

Based on the information and photos published by the Batumi and Lazeti Diocese, IDFI thinks it is impossible to determine whether the newly discovered burial site represents the mass grave of victims of those executed through the Stalinist Lists, as in the 1930s, other repressions (Kulak, National, the so-called "Troika") also were organized, in which hundreds of people lost their lives in the Adjara Region. We hope that in future, it will be possible to conduct DNA analysis in order to ascertain whether this burial site belonged to the victims of the Stalin’s Lists.

Batumi and Lazeti Diocese, Government of Autonomous Republic of Adjara and all public agencies that had been informed about the burial site for an year and a half, should had involved in the process professional historians and researchers. It is unfortunate that IDFI and other organizations working on the topic of Soviet repressions, as well as other historians were not able to work on site to ascertain the exact type of burial. Burying the remains without relevant research and analysis will leave many questions unanswered. On the basis of analysis of the documents kept in the MIA archives, there was a high chance to determine which exact repressive operation we are dealing with. The list, which contains 608 entries, with names and surnames is inaccurate because it does not mention the names of many others repressed by so called "Stalin's Lists" and other operations. It is important to honor the victims and bury their bodies properly, but this should not happen at the detriment of scientific research or the general high public interest that exists towards this topic.

IDFI expresses its readiness to engage together with its international partners in a large-scale research and use all its human and administrative resources including its document databases of the repressed, etc.

Several archival documents kept in the Archive of the Ministry of Internal Affairs of Georgia about repressive actions carried out in Batumi in 1937-1938.

1-2. Letter addressed to the People’s Commissar for Internal Affairs of Adjara, Jinjolia on execution of the death penalty of 19 convicted prisoners (8 January 1938) 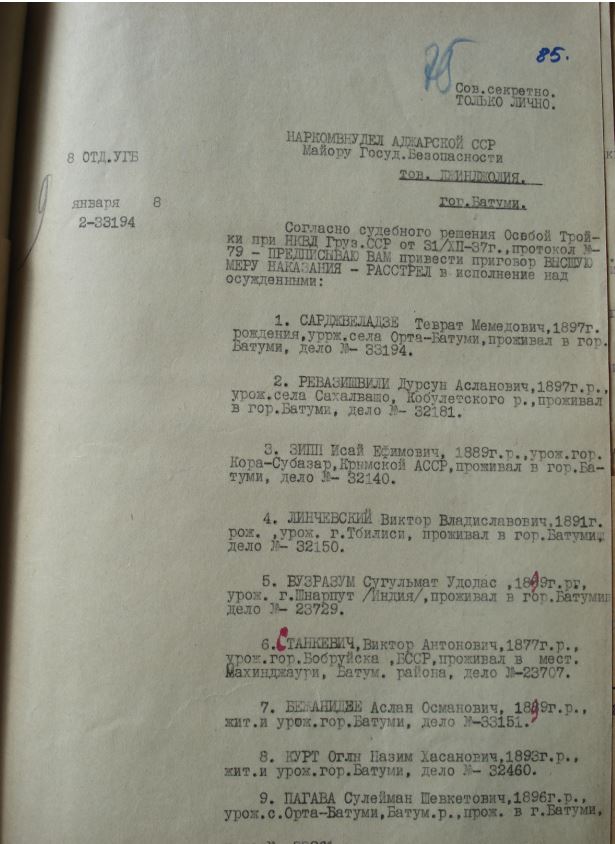 3. Protocol of 27 September 1937 of the Central Committee of the Communist Party of Georgia about the death penalty for 8 persons arrested for counter-revolutionary charges and theimprisonmentfor other 3. 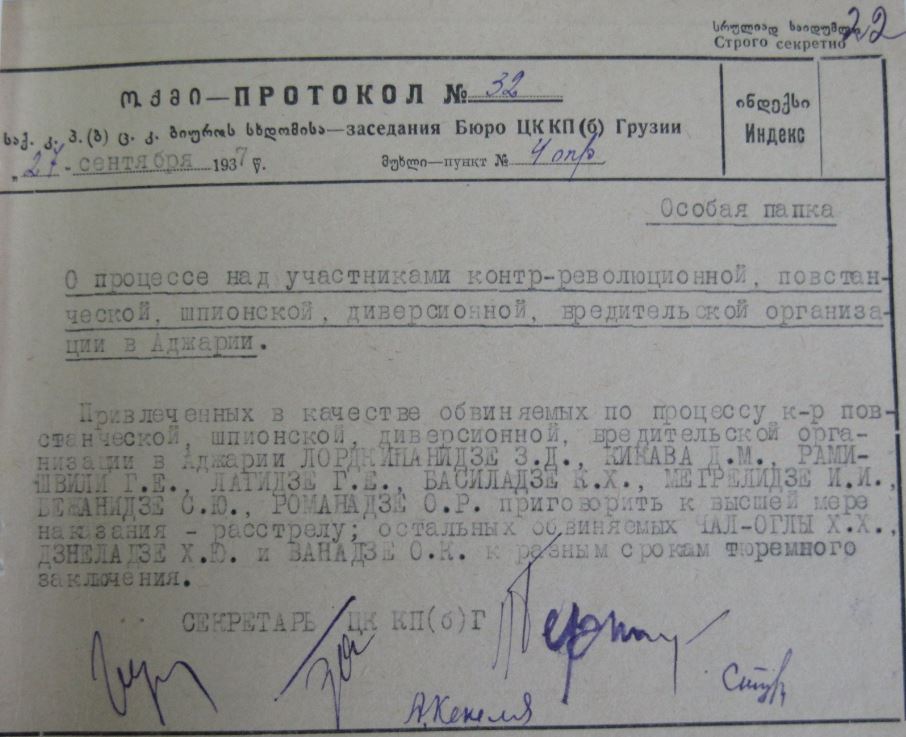 The document is signed by Lavrentiy Pavlovich Beria.

This document clearly shows that in many cases the trial was formal, and the verdicts were pronouncedat the secret sessions of Communist Party

4. Act of 18 November 1937: On execution of Huseyin Asatsba, Ioseb Tsetskhladze and Mikheil Abkhazava 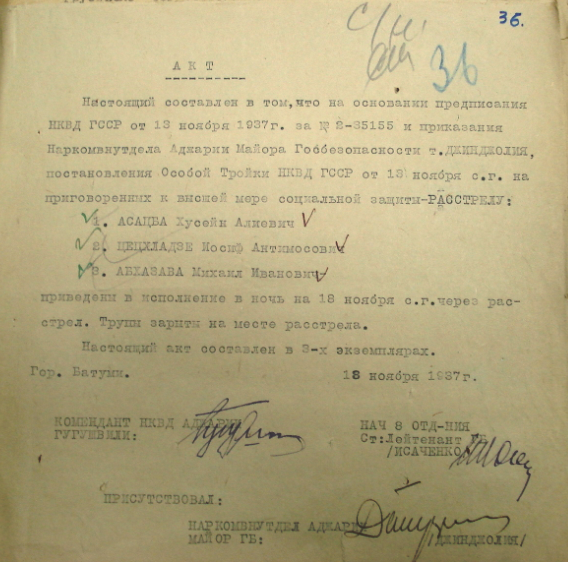 5. The Act of 16 October 1938 on the completion of the Decree by the Special „Troyka“ and the execution of 12 convicted prisoners 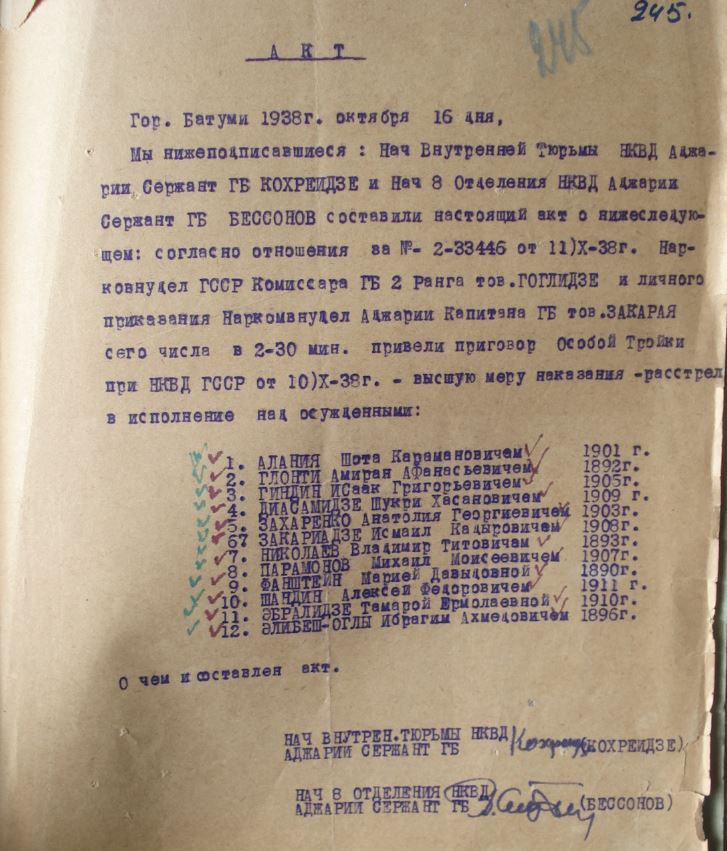