Studies of the stories of the repressed persons, their proper commemoration and immortalization is an important and urgent issue in the post-Soviet region. In many countries, on the execution and burial sites, there are complexes of memorials and the governments support the commemoration of the repressed, educational and the other types of events. Consideration of the experience of foreign countries and the solution of the issue of graves also became a part of Georgia’s agenda: after the years of unsuccessful search for the execution and burial sites of the repressed, in April 2019, the Diocese of Batumi and Lazeti spread the information about the discovery of mass graves of the repressed persons executed between 1937-1938 under the Soviet Union near Batumi, at one of the military bases of the Ministry of Defense where the Soviet tank division had been allocated before. The discovered site is the first and the only location of this type and the actions taken there should be exemplary for the future.

The Measures Taken by the Diocese of Batumi and Lazeti

In April 2019, the publication of the announcements by the Diocese of Batumi and Lazeti fostered a controversy in the society. The statement was accompanied by the information about the intention of the Diocese to bury the discovered remains according to the Christian customs, which was opposed by the Supreme Religious Administration of Georgia's All Muslims. According to their statement, considering the religious composition of the population of Adjara in the 1930s, arguably, Muslims, including the religious figures, would be among the executed people. Various organizations also expressed the opinion that this could be a graveyard of the Turkish soldiers who invaded Adjara in 1921.

Following the statements mentioned above, the Diocese of Batumi and Lazeti suspended the burial of the remains for an uncertain period. They also responded to the opinion regarding the Turkish soldiers and presented the photos in which together with the bodies, various artefacts, including the coins issued in 1935-1936 were shown. Through the superficial observation of the discovered coins, fired bullets and the other materials, it can be concluded with high probability that the graves belong to the people executed in 1937-1938. This claim is also supported by the fact that the discovered bodies had their hands tied behind their back and the penetrating wounds were identified on their skulls that were similar to the wounds of the victims of the Soviet repressions discovered in the other countries. Additionally, the graveyards, where up to 150 dead bodies are placed in the ditches dug up in advance, are identical to the analogous sites in the other countries.

Photos spread by the Diocese of Batumi and Lazeti

After the separation of the bodies, the Diocese of Batumi and Lazeti ordered the preparation of the wooden coffins in which the bodies were placed. Today, these coffins are located on the lower ground floor of Holy Mother Virgin Nativity Cathedral in Batumi. According to the representative of the Diocese, they are waiting for the government’s decision, after which they will take the appropriate actions.

The Measures Taken by the State

After the spread of the information by the Diocese, the Government of Adjara created the special commission at the Ministry of Health of Adjara which was obliged to study the issue, work on the identification of the remains, the organization of burial and the arrangement of the memorial. IDFI became interested in the work of the commission and officially addressed the Ministry of Health of Adjara. According to the information provided by the Ministry, up until now, two official sessions and a few working meetings have been held; Levan Samkharauli National Forensics Bureau took DNA from the remains and created the relevant database; for the studies of the newly-discovered graves, the Ministry of Education, Culture and Sport of Adjara was requested to create a special task force; for the discovery and studies of the graves at the location indicated above, situational sketch was created and the information regarding the territorial security was requested from the Ministry of Defense of Georgia. Based on the information provided by the Ministry of Defense, until now, the decision regarding the place and time of the burial of remains has not been made.

IDFI’s Participation in the Above-mentioned Processes

IDFI was actively involved in the search for archival documents about the people repressed in Batumi and Adjara. Through the archival research carried out by the organization, specifically through the study of the minutes of the execution of the extreme penalty, it has been established that between 1937-1938, through the various means of punishments (such as “Kulak” operation, Stalinist lists, national repressions, etc.) totally 1050 were executed in Adjara which is several hundred more than the amount assumed before. IDFI gave this list to the representatives of Diocese of Batumi and Lazeti. Based on the list, it has been concluded that among these 1050 people, there were 11 women as well as Orthodox and Muslim religious figures. The women’s issue is very important because if the remains of any of them will be identified, it will be possible to establish when the people in different graves were shot dead – the Programs Director of IDFI, Levan Avalishvili talked about this on Radio Liberty. Also, it is essential the number of the minutes of the executions carried out at different times preserved at the MIA Archives to be compared with the number of bodies discovered in the graves because, as a rule, dozens of people were being executed simultaneously, and in case of the coincidence of numbers, the identification will simplify. 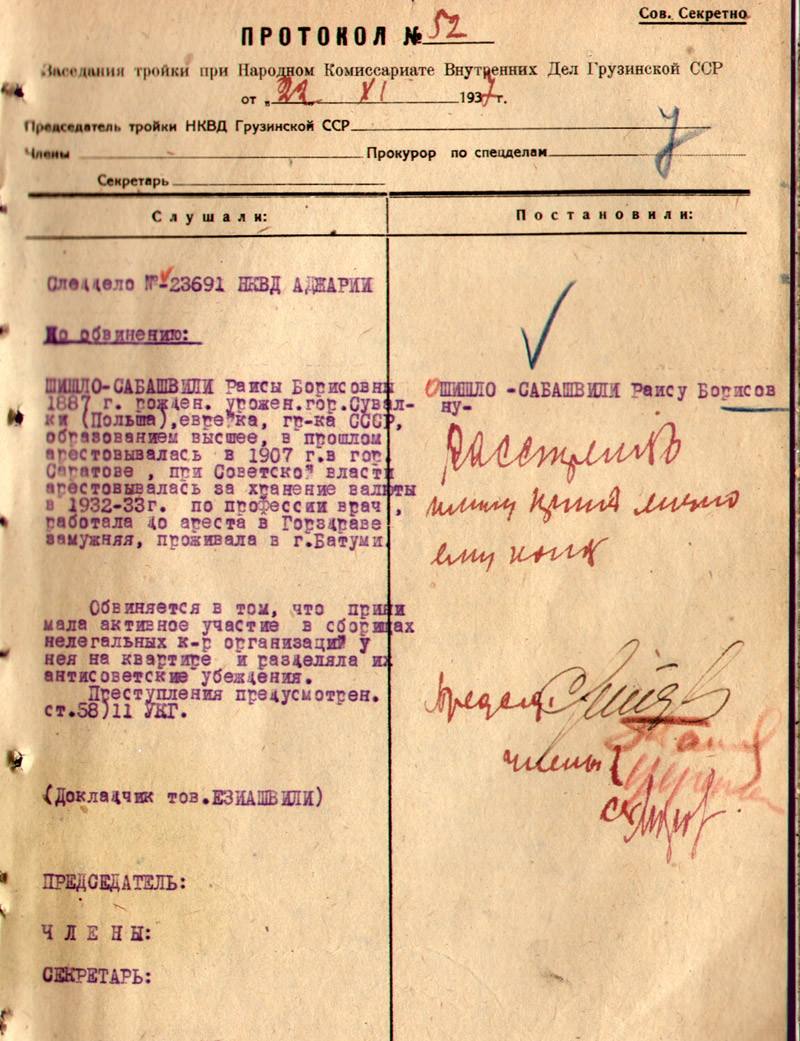 November 22, 1937 protocol of the NKVD special „Troyka“ on the execution of the renowned doctor from Batumi, Raisa Shishlo-Sabashvili (The document preserved in the Archive of the Ministry of Internal Affairs of Georgia)

The Executive Director and the Programs Director of IDFI, Giorgi Kldiashvili and Levan Avalishvili participated in the first official session of the commission created by the Ministry of Health of Adjara. They also had a look at the site discovered by the representatives of the Diocese of Batumi and Lazeti and together with Mother Sidonia observed the remains.

On 19 September 2019, IDFI sent a letter to the Government of Adjara and called for taking rapid and effective measures toward studying the remains and burying and commemorating the victims of the Soviet repressions.

At the beginning of November 2019, the Conference by the organization International Memorial will be held in Estonia at which Giorgi Kldiashvili and the Head of Archives, Soviet and Memory Studies Direction at IDFI, Anton Vacharadze will make a presentation. The topic of the presentation will be the issue of studying the execution and burial sites of the repressed people during the Soviet period.

Hasan Gogitidze, executed in Batumi on January 23, 1938 (The photo is preserved in the Family Archive)

IDFI considers that the actions taken by the commission until now toward studying the graves and commemorating the victims is not enough and for this, it proposes the following recommendations for the Government of Adjara:

- The Government of Adjara should assign a separate budget for the studies of the burial site of the repressed people near Batumi in 1937-1938, their commemoration and the identification of the remains.

- A special group of archaeologists and specialists should be created which will be working on already discovered graveyards and will continue looking for new sites of burials.

- The territory where the graves were found should be transferred to the Mayor’s Office of Batumi from the Ministry of Defense and the memorial complex of the victims of the Soviet repressions should be set there.

- An active campaign should be carried out for the identification of the remains which would encourage the descendants of the repressed people to provide their DNA which will be compared to the samples taken from the remains. The list created by IDFI reveals that during the repressions, dozens of people were executed simultaneously and they were placed into the same grave together (only five such graves have been found until now). If even a few bodies are identified, it will be possible to define certainly when the people in these graves were executed.

- Campaigns for raising public awareness especially among the school and university students should be held and the government, clergy and specialists should be involved in this process in order to spread the information about the Stalinist terror in 1937-1938.

- The agreement should be reached between the Orthodox Church of Georgia, and the Supreme Religious Administration of Georgia's All Muslims and the state should also be involved in it.