The most essential directions of the activities that were implemented in 2014 are: Purchasing lots of frequencies to build broadcasting network by private companies and transferring frequencies to the regional televisions free of charge, defining the 30-35 % lower tariff for TV broadcasters comparing to average European price in order to spread programs and starting building of private network infrastructure; Revealing the company that will build the proper net for the Public Broadcaster through competition and starting to build the mentioned network; Making decision to give 220 000 unit receivers to socially vulnerable customers free of charge and fixation low prices ( 40 GEL) on these equipment as a result of competition; Giving license to regional and local televisions free of charge and optimization of frequencies given to them.

In spite of positive outcomes, big part of activities planned by state has not been fulfilled in 2014 because of subjective and objective reasons. Building of broadcasting network did not start on time, as well as informational campaign and the process of distributing receivers. Accordingly, advocacy of this process was not carried out.

2015 year is very important period for Digital Terrestrial in Georgia. In July-August, national analogous broadcasting networks will be turned off. Switching off the analogous broadcasting to regional and local televisions will be ended in 31 December, 2015 although their activation is planned in June of this year. One of the main purposes of this project is to support and advocate information campaign.

Involvement of the organization is essential in process supervision to build the network and fulfill license conditions, distributing receivers to socially vulnerable customers, also in order to monitor the market of terminals for digital service. Also, making amendments in legal acts regulating process of transferring to digital broadcasting should be done, but at first place in the laws regarding “Electronic Communication” and “Broadcasting” in Georgia

Mentioned changes define the conjuncture and future of broadcasting market. Intensive participation, involvement and advocacy of this process is very important. Advocacy of implementation of digital switchover strategy is also essential, along with adopting strategic documents. It is especially important to conduct the last stage of the process in accordance of rightly planned procedures.

It’s much prioritized, that the issue of accessing the broadcasting network of signals of current national, local and regional broadcasters should be controlled, in order to reveal and remove systematic and non systematic obstacles. The role of Georgian national communication commission is very important in this process. The process started in 2014 and will be finished in the end of 2015, according to the state action plan.

We think that over the next 10-month period monitoring of the transition to digital broadcasting of Georgia will be covered during the project in the following ways:

In order for the Georgian media environment to be improved in the project period, it is of utmost importance that the final stage of transition to digital broadcasting is successfully implemented. The activities must be carried out in four directions:

During the project activities will cover the following major areas:

- Monitoring of license conditions, including the coverage of population, placing of TV programs and other important actions implemented by “Georgian TeleRadioCenter” LLC, “Stereo+” LLC, and local licensees of the digital broadcasting network. Also preparing study of problematic cases and providing recommendations for the activities to be implemented.
- Studying the strategy of information campaign on digital switchover made by LEPL “Georgian Public Broadcaster” and commercial broadcasters, as well as legislative changes and planned activities, and preparing recommendations.
- Evaluation of the process and intensity of information campaign on digital switchover, studying effectiveness of the channels of communication with citizens; Estimation of the effectiveness of the information campaign and readiness index of the population.
- Studying the consideration of interests of socially unprotected citizens, also studying, studying events aimed at integration and accessibility of services for users with disabilities and preparing recommendations to identify existing gaps.
- Studying the problems of the local TVs associated with transition to digital broadcasting and presenting recommendations.
- Supporting transparency of the conditions behind placing channels in digital terrestrial television network; supporting implementation of recommendations and advocating non-discriminatory and cost-oriented conditions.
- Studying the problems which arise from subsidization of end users, also from distribution and installation of digital broadcasting equipment as well as other problems related with the installation of the antennas and the other technical matters related with regulations.
- Studying of problems related with openness and interoperability of software receivers and preparing recommendations.
- Research of development of state broadcasting network, construction deadlines and research of quality with so-called 20 test point selection.
- Studying whether the interests of ethnical minorities are considered during the process of transition to digital broadcasting.

The project will be implemented via various tools such as: by research of the current state of affairs, requests of public information, face-to-face meetings and roundtable discussions, analysis of the results, SWAT analysis in order to identify problematic directions, presenting recommendations to the relevant authorities and making presentations, involvement in legislation drafting process, monitoring and analysis of the implementation process. Quarterly and thematic reports will be prepared about the results. 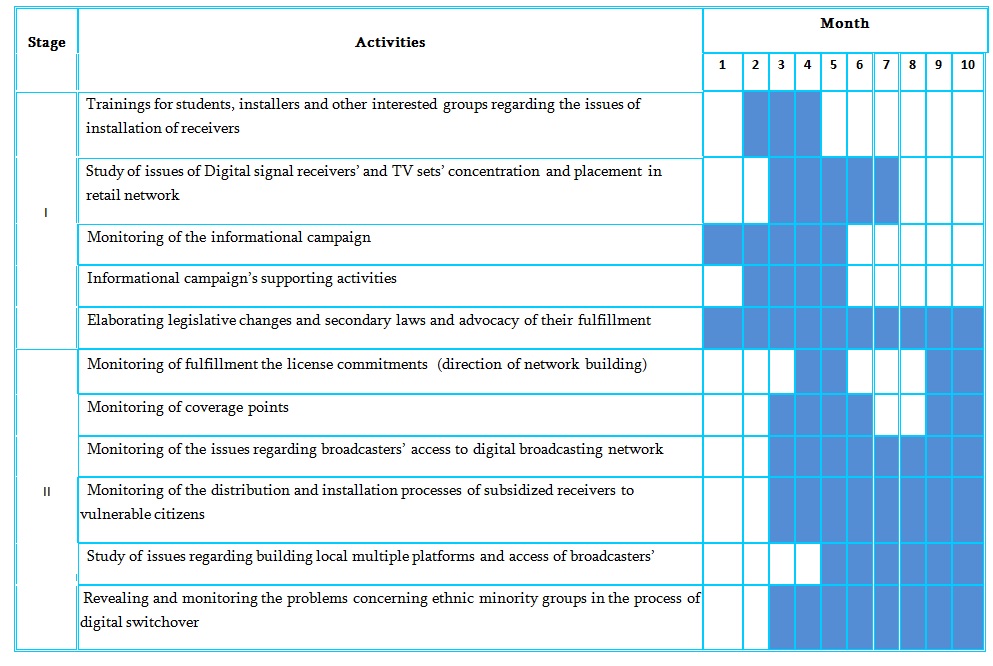