The openness of archives is very important for studying history in different countries. However, this issue is more critical in the countries where archives can be used for the identification and rehabilitation of the victims of repressions. In the region covered by IDFI’s project, the archives play an important role in this direction.

In 2017, the Institute for Development of Freedom of Information (IDFI), together with the international network of archive experts, started carrying out the project “Enhancing Openness of State Archives in the Former Soviet Republics”.

Within the frame of the 2017-2018 project, a methodology for evaluating the openness of state archives was created and 20 state archives in 10 post-Soviet countries were evaluated.The project continued during the next years (2019-2020) and 8 new countries from eastern and central Europe were added to the rating. As a result of the project, 2 archives were evaluated in each country.

The main findings of the study include:

- Open and some of the closed archives have a common approach to the classified documents: they do not destroy formerly classified fonds, files, or records – the documents that at some point were made secret by the state. At the open archives, the extension of secrecy period is not allowed. After the set date, such documents become publicly available. The documents that had been secret can not be re-classified;

- The laws on the protection of personal data do not extend to archives or fonds of repressive state institutions, documents of regime archives. This is a principle of the countries with examples of the best archival openness, including Latvia and Ukraine. Also, Kazakhstan shares this principle on a legislative basis;

- The archives that are among the most open countries offer the best online services to researchers and vice versa – archives with less openness have worse results in this direction while some of them do not have online recourses at all;

- The archives oriented st researchers enable the researchers to use electronic versions of documents online. Also, photocopying in reading halls is allowed at 5 out of 6 archives with the highest score of the openness: Czech Republic, Poland, Latvia, Lithuania, Ukraine.

According to the research, Georgia holds 8th place among 18 countries and, in total, it has scored 70.99%. 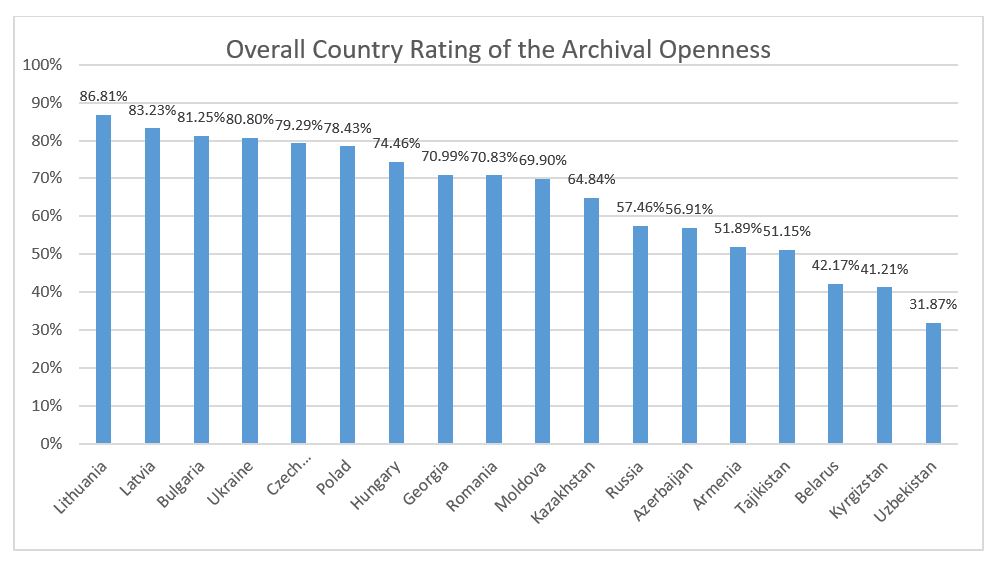 You can find the research methodology, information about partners, rating of particular countries and state archives and various materials created within the frame of the project on this portal - http://open-archives.org/.

It should also be mentioned that the Parliament of Georgia rejected IDFI’s legislative proposal, which included the legislative amendments. If the proposal had been supported, the ranking of the Georgian archives would have been much higher.

IDFI will continue working with the Parliament and all stakeholders to improve archive legislation and transparency, in order to enhance the openness of state archives and will actively use the results of the 2019 research on the Openness of State Archives in the Former Soviet Republics and Eastern Bloc Countries and international recommendations for this.

Publication of this article was financed by the Open Society Institute Budapest Foundation (OSI) within the frame of the project - Enhancing Openness of State Archives in Former Soviet Republics and Eastern Bloc Countries. The opinions expressed in this document belong to the Institute for Development of Freedom of Information (IDFI) and do not reflect the positions of Open Society Institute Budapest Foundation (OSI). Therefore, OSI is not responsible for the content