The Number of Motions on Secret Surveillance Has Decreased

The Supreme Court of Georgia has fulfilled the obligations taken under Open Government Partnership (OGP) Action Plan 2014-15 and has proactively published on its official website unprecedented statistics on surveillance. According to the published data, the Court of First Instance has already examined 952 motions related to telephone surveillance in 9 month period (January – September, 2014) and 819 of them were satisfied.

The above-mentioned information is published on the website of Supreme Court of Georgia and is available in the category of Statistical Data (9 months of 2014), sub-category of “Data about Securing Measures”. Unfortunately, this information is not detailed and statistical data does not show which public institutions made these motions in the Supreme Court (Prosecutor's Office, Ministry of Internal Affairs, Investigation Service of Ministry of Finance). There is also no indication whether the motions concerned on telephone surveillance or the given statistics also includes other methods of surveillance (e.g. removing and fixation of the information from telecommunications channel or computer system).

Institute for Development of Freedom of information (IDFI) is continuously observing the process of openness and access to this information. We have published a number of studies on the statistics of telephone surveillance:

Thus, based on the information received by IDFI as well as that published by The Supreme Court we can conclude that in 2014, as compared to previous years, the number of motions made to courts on secret surveillance has significantly decreased.

For instance, only in case of Tbilisi Prosecutor’s Office Tbilisi City Court received 1795 motions on telephone surveillance in 2011, 5951 - in 2012 and 1400 motions in the first 5 months of 2013. However, Tbilisi City Court received only 952 motions from all the investigative entities during 9 months in 2014. The statistics also reveal that the percentage of granted motions has decreased, while 99.86% of motions were granted in 2011, the courts satisfied only 86.03% of the motions in 2014. 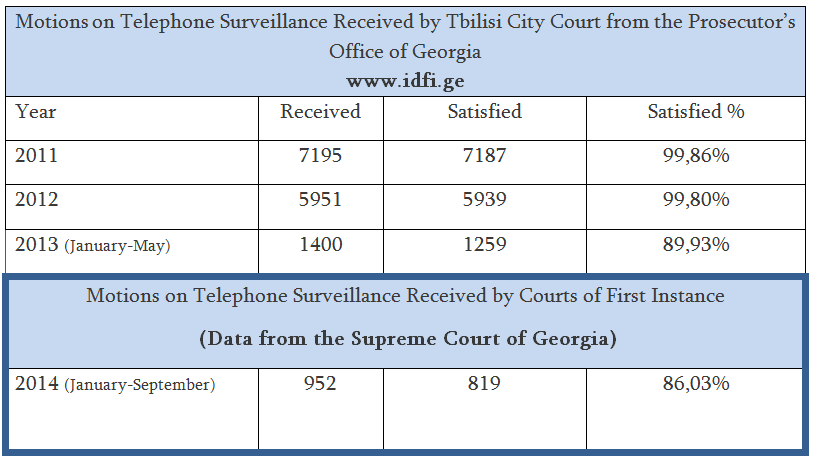 IDFI welcomes fulfillment of the obligation taken by the Supreme Court of Georgia in the framework of OGP action plan 2014-15. This statistics give citizens an opportunity to monitor decrease and increase dynamics of surveillance, as well as number of motions satisfied by the court. Openness of this information will promote improving watchdog mechanisms, and will contribute to establishing standards of transparency and open governance in our country.

Here we would like to give further recommendations to the Supreme Court of Georgia and call to publishing more detailed information about surveillance. In particular: