Grant Recipient: Institute for Development of Freedom of Information

Traditionally, public procurement is considered to be one of the key areas susceptible of corruption, especially in the economies of developing countries with widespread corruption. Constituting 10-20% of GDP and 45% of government spending, public procurement can become a significant budgetary waste at taxpayers’ expense.

The importance of corruption free, effective and transparent institutions is highlighted in the 2030 Agenda for Sustainable Development as a part of the United Nation’s 16th Sustainable Development Goal. In addition to the London 2016 Anti-Corruption Summit Communique, where corruption is named as a top priority having global importance anti-corruption is also one of the main areas identified in the Open Government Partnership (OGP) commitments focusing on the efficiency of public contracting. In fact, the Open Government Guide lists four steps to achieve “fair and good value-for-money” public contracts , focusing on improving existing public procurement systems to make them more transparent and accountable.

Armenia, Azerbaijan, Belarus, Georgia, Moldova and Ukraine are the states, which became independent from the Soviet Union simultaneously, yet have had varied success in terms of fighting corruption within the same timeframe. The fact is illustrated by the significant differences in rankings of the Corruption Perception Index among the selected states. For instance, looking at the indexes of Georgia, Armenia, Moldova and Ukraine, there is almost a 100 ranking position difference between the best and the worst performing Eurasian states selected for the project out of the 176 countries examined in the report (Georgia -50th, Armenia -92nd, Moldova -103rd, and Ukraine - 142nd ).

Unlike civic control mechanisms, the laws on freedom of information – crucial element for transparent public procurement system – is present in the constitution of all the Eurasian states . Yet, the systems of public procurement of the states in question vary, as they are based on three different international standards (EU Directives on Procurement, the UNCITRAL Model Law, and World Trade Organization’s General Procurement Agreement). However, despite the fact that these standards focus on different aspects of economic activities, they are all directed toward transparency, integrity and objectivity, with efforts to harmonize respective provisions.

In addition to the lack of universal model for a standardized legal framework of public procurement legislation, there is no effective mechanism for tracking the PPL enforcement process in the pilot states. Despite some improvements of PPLs in Armenia, Azerbaijan, Belarus, Georgia, Moldova and Ukraine, there are significant problems with the enforcement of PPL provisions. To match the existing gaps between legislations and their implementation process, IDFI, with its partner experts will assess the PPL enforcement processes in the pilot states and will work out an effective monitoring mechanism to regularly assess the developments in PPL and its implementation practices in Armenia, Azerbaijan, Belarus, Georgia, Moldova and Ukraine.

The project aims to elaborate a common standard for assessing the legislative framework of public procurement in Armenia, Azerbaijan, Belarus, Georgia, Moldova and Ukraine, which will later be used to evaluate the PPL enforcement process in the pilot states. 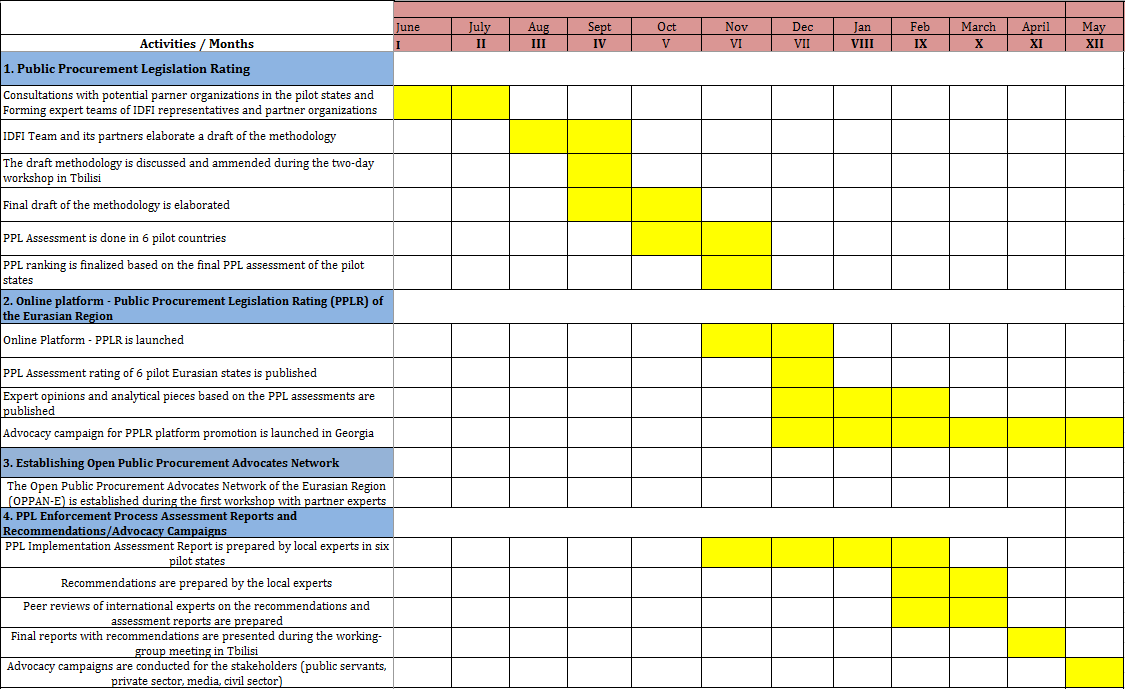