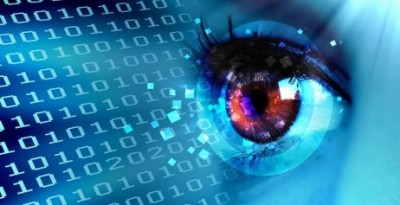 The given information summarizes the latest report that is part of a series of reports prepared by the Institute for Development of Freedom of Information (IDFI) on secret surveillance regulation in Georgia since 2013. The summary covers the period between April-December, 2016. The full report on the regulation of secret surveillance in Georgia since 2013 can be found in pdf document below.

Recent surveys show that public perception of surveillance has not changed dramatically in Georgia since 2013. There is still a perception that law enforcement agencies have technical capacity to wiretap and are using this capacity in illegal ways.

Although there has been some progress in terms of investigation of cases of illegal surveillance, the emergence of new cases after the change of government in 2012 has increased doubts on continuing systemic practice of illegal surveillance, lack of willingness from the government to limit its power, and indicates a lack of efficient and comprehensive reform in this area.

As a result of the reform aimed at decoupling security and intelligence agencies from the Ministry of Internal Affairs (MIA) started in December 2014, a new institution State Security Service was created to be in charge of security issues. However, even though, according to the election program of Georgian Dream for 2012 Parliamentary Elections, the functions of State Security Service were supposed to be limited to intelligence gathering, analysis, systematization and realization, and it was explicitly stated that criminal prosecution must not be a function of the security service, it was still given investigative and police functions.

In April 2016, the Constitutional Court of Georgia ruled that technical access of State Security Service to telecom operators’ networks, allowing unfettered monitoring of communication and collection of communications metadata, was unconstitutional. Also, the Constitutional Court ruled that there is no control mechanism over real time access to Internet traffic in the legislation. The only leverage the Personal Data Protection Inspector has in this regard is his/her power to inspect the lawfulness of data processing by a data controller/a data processor.

March 31, 2017 was set as a deadline for preparing fundamental legislative amendments and ensuring institutional and technical base for a new system. For this purpose, civil society organizations (CSOs) involved in the campaign ‘This Affects You’ have prepared a package of legislative changes, further reforming regulation of surveillance in Georgia. The draft law envisioned the establishment of three new bodies/institutions: 1. Special Agency of Surveillance; 2. Parliamentary Supervisory Council of the State SecurityService; and 3. Independent Investigation Mechanism. The draft law proposed a significant increase of the oversight powers of the Personal Data Protection Inspector in regards to secret surveillance. However, the draft law was not submitted to the Parliament before 2016 October Parliamentary elections.

Furthermore, the two-key system does not ensure complete control of the court on secret investigative actions, since law-enforcement authorities still have the possibility to carry out counterintelligence or secret investigative activities (secret audio and video recording, movie and photo recording, using TV cameras and other electronic devices) without court approval. Moreover, law-enforcement agencies also have the right to launch electronic surveillance with the written consent of at least one party of the communication, in order to obtain counterintelligence information. Human Rights Education and Monitoring Center (EMC), a Tbilisi-based NGO, filed a lawsuit in the Constitutional Court against these legal provisions on November 16, 2015.

Proactive disclosure of data on state secret surveillance plays a vital role in ensuring civic control over law-enforcement agencies and court system, as well as in raising public trust towards existing policies in this area. A positive development in this direction was the decision of the Supreme Court of Georgia on proactive disclosure of secret surveillance of telephone conversations and the number of considered motions.  This obligation was taken by the Supreme Court as a result of a recommendation made by IDFI and other CSOs in the framework of the Open Government Partnership (OGP) Action Plan of Georgia. Furthermore, as a result of legislative changes, since August 1, 2014 the Supreme Court of Georgia also started proactively disclosing the registry of actions of secret investigation.

According to the published data, the number of motions on telephone surveillance made to the Courts of First Instance has been decreasing every year. Namely, there were more than 7,000 motions in 2011 (only in case of Prosecutor’s Office), while in 2015 there were less than 400 (total sum of all investigative bodies). According to the statistics, the percentage of granted motions has also decreased over the past years. While almost 100% of requests were being approved between 2011 and 2012, this number went down to 84% over the past three years. 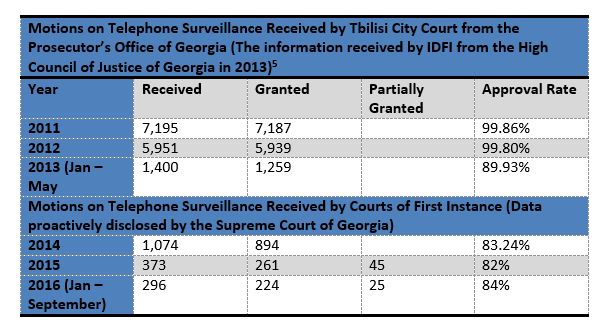 Since 2015 the proactively disclosed information also includes data about the number of duration extensions for existing motions on telephone surveillance and recording. In 2015 there were a total of 85 motions considered for duration extension, out which 72 were fully granted, 9 were granted partially, and only 4 motions were not granted. Therefore, the approval rate for motions on extension of surveillance and recording was 95%.

According to the first 9 months of 2016, a total of 150 motions were considered for duration extension, 137 motions were fully granted, 5 were granted partially and 8 were not granted. The approval rate for motions on extension of surveillance and recording was still 95%.

The complete data for secret investigative actions in 2016, including both telephone surveillance and motions on other secret actions, has not been published yet. In 2015 there were a total of 2,719 motions to both city and regional courts of Georgia, out of which 2,693 were considered. In total 2,098 motions were fully granted, 251 – granted partially, 344 motions were not granted.

The April 2016 decision of the Constitutional Court of Georgia has clearly shown that the security services possess technical capacity to carry out surveillance activities bypassing courts and Personal Data Protection Inspector. Therefore, it can be possible that the proactively published information does not accurately depict the existing picture of secret surveillance.

A Summary of Ongoing Processes

At the moment of writing of this report (December 2016) the following processes are ongoing:

- Public perception of surveillance has not changed dramatically in Georgia since 2013. There is still a perception that law enforcement agencies have technical capacity to wiretap and are using this capacity in illegal ways.

- The fact that a number of cases of illegal surveillance took place after 2012 have strengthened doubts about the continuation of a systemic practice of illegal surveillance, and have pointed out the lack of willingness from the government to limit its power by conducting an efficient and comprehensive reform in this area.

- Reform of the Ministry of Internal Affairs (MIA) was criticized for a potential duplication of functions between the MIA and the newly created State Security Service.

- The two-key system, which has been in use for about 1.5 years, can be positively assessed due to high level of public trust in the impartiality of the Office of the Personal Data Protection Inspector. However, sustainability and effectiveness of the two-key system will largely depend on future institutional reforms.

- In April 2016, the Constitutional Court of Georgia ruled that technical access of State Security Service to telecom operators’ network, allowing unfettered monitoring of communication and collection of communications metadata, was unconstitutional. As the decision of the Court showed, the existing two-key system does not ensure effective mechanism for prevention of illegal secret surveillance bypassing courts and Personal Data Protection Inspector. Therefore, fundamental changes are needed.

- March 31, 2017 was set as a deadline for preparing fundamental legislative amendments and ensuring institutional and technical capacity/bases for the new system. A package of legislative changes has been prepared by members of the civil society campaign This Affects You; however, it was not initiated in Parliament before October 2016 Parliamentary elections.

- The Supreme Court continues to proactively disclose statistics on surveillance, the practice started in September 2014 as part of an obligation (recommended by IDFI and other CSOs) taken by the Supreme Court in the framework of the Open Government Partnership (OGP) Action Plan of Georgia.

Future prospects of regulation of secret surveillance in Georgia:

- The government and the Parliament have less than 3 months until the deadline of March 31, 2017 to prepare fundamental legislative amendments following the decision of the Constitutional Court of Georgia. At the moment it is not certain whether the draft package prepared by This Affects You campaign will be initiated in the Parliament in the form intended by its civil society authors.

- After October 2016 Parliamentary elections, the ruling party Georgian Dream has secured constitutional majority, which gives the government all resources to implement fundamental reform of secret surveillance. This reform is however only possible if law-enforcement agencies limit their powers and effective system for their oversight is established. Failure to effectively ensure a system for prevention of illegal surveillance while holding constitutional majority will be proof of lack of willingness on the side of decision-makers.