2016 Statistics on Telephone Surveillance and Secret Investigation in Georgia

On January 25, 2017 the Supreme Court of Georgia published complete information about motions on telephone surveillance in 2016. Prior to this, available statistics covered the period up to October 2016.

According to the published information, in 2016 there was a total of 401 motions on telephone surveillance, 315 of which were granted fully, and 30 were granted partially. Therefore, the percentage of granted motions has slightly increased as compared to 2015 and was 86%. 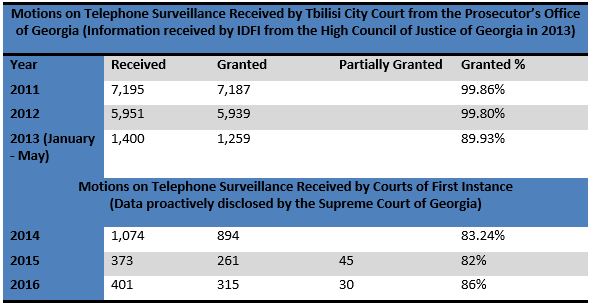 The Supreme Court of Georgia proactively publishes information about motions on telephone surveillance since 2014. Initially, this obligation was a recommendation prepared by IDFI and other non-government organizations in the frames of 2014-2015 Georgia Action Plan [1] of Open Government Partnership (OGP). By completing this commitment Georgia became one of few countries worldwide where such statistics is publicly available.

At first, the statistical data published since 2014 did not include details such as type of crime and geographic location. In the 2016-2017 OGP Georgia Action Plan, the commitment was updated to include data separated by type of crime and geographic location as well. The Supreme Court of Georgia has fulfilled the commitment and in 2016 data on telephone surveillance is available separated by specific courts and classification of crime.

According to the data, the highest number of motions – 299 in total – was considered by Tbilisi City Court. The remaining 102 motions were considered by 15 city/district courts, out of which the most cases were received in Batumi (22 motions), Kutaisi (19 motions) and Rustavi (13 motions). Half of all motions considered in 2016 were related to three articles of the Criminal Code of Georgia – fraud (70 motions, Article 180), extortion (58 motions, Article 181) and bribe-taking (57 motions, Article 338). 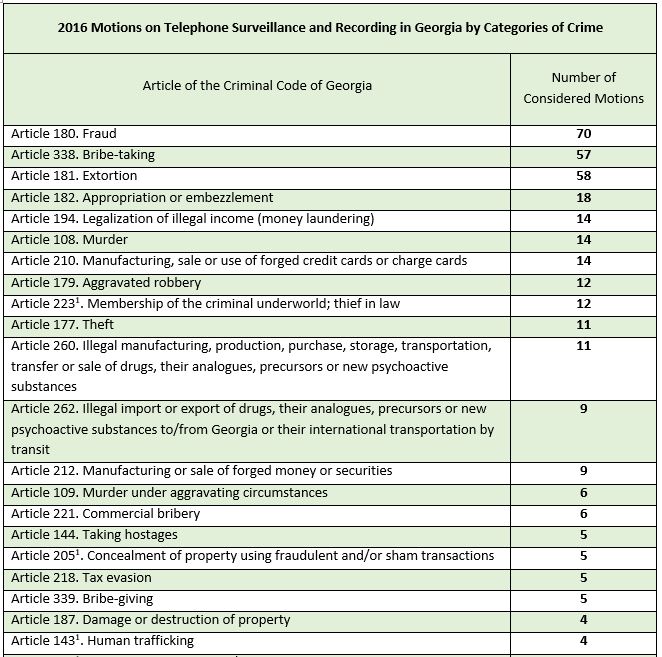 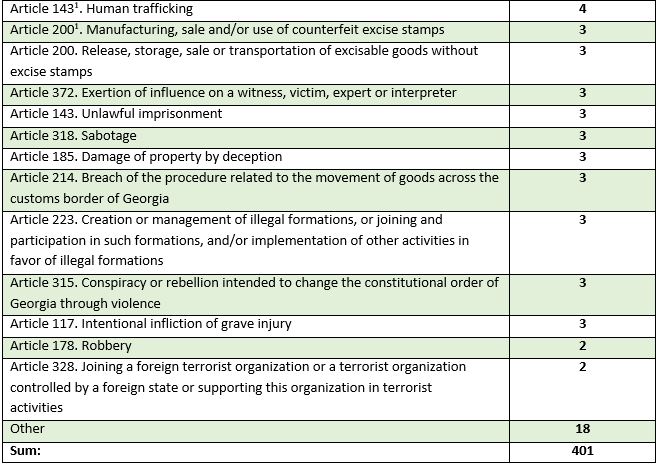 Since 2015, the proactively disclosed information also includes data about the number of duration extensions for existing motions on telephone surveillance and recording. However, the published data seems to be unreliable, since there is an inaccuracy in the 2016 data. More specifically, according to data published by the Supreme Court for the first 9 months of 2016 (January – September), 150 motions on duration extension of telephone surveillance and recording were considered (out of which 137 were granted fully and 5 partially); while, according to data for the 12 months of 2016, there were 79 motions on duration extension, out of which 69 were granted fully, 3 partially, and 7 were not granted.

Registry of Actions of Secret Investigation in 2016

As a result of legislative changes, starting from August 1, 2014, the Supreme Court of Georgia also started proactively publishing registry of actions of secret investigation. The registry includes information about granted motions on telephone surveillance as well as other secret investigation. As of February 2017, only data for 4 months of 2014 (18 August – 31 December), 2015 and 2016 are available.

According to the Criminal Procedure Code of Georgia, the types of secret investigative actions are as follows:

- Removal and recording of information from:

A computer system (both directly and remotely).

Installation of a piece of software in a computer system for this purpose.

- Electronic surveillance through technical means, which does not endanger human life, health or the environment.

According to 2016 data from the registry of secret investigative actions, the number of motions of secret investigative actions (including wiretapping and secret recording of phone conversations, removal and recording of information from a communications channel, secret video and audio recording, removal and recording of information from a computer system, etc.) has increased 1.5 times compared to 2015. The rate of granted motions has also increased from 77% in 2015 to 92% in 2016. 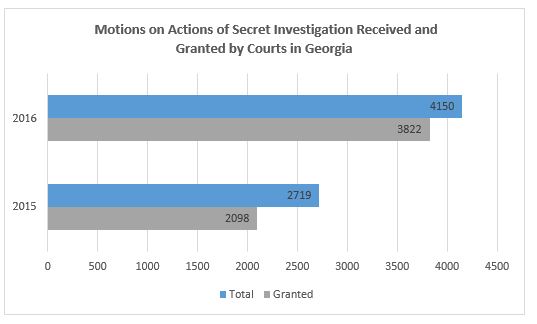 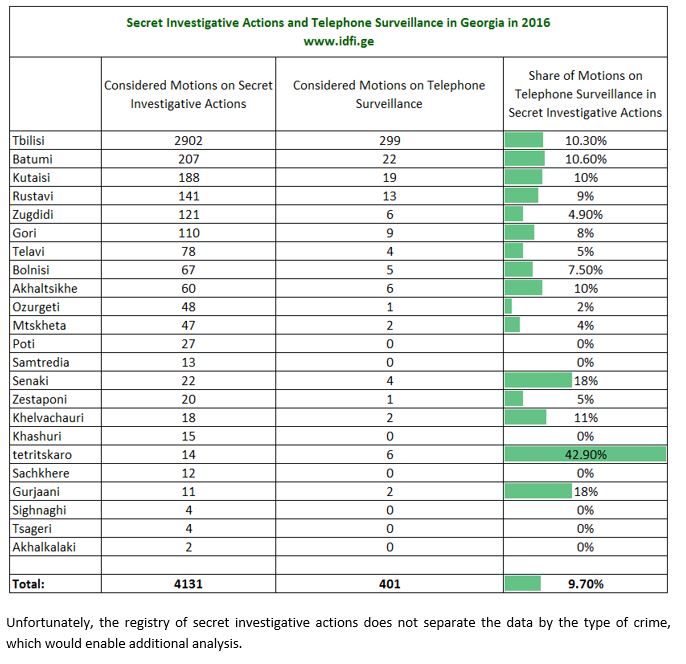 Proactive disclosure of statistical information about secret surveillance plays a significant role in ensuring civic control on law-enforcement agencies and the court system, as well as in increasing public trust towards existing state regulations. Therefore, ensuring accuracy of statistics is of extreme importance. Moreover, it is also important to note that the data on telephone surveillance do not include information about other secret investigative actions such as real time access to Internet traffic. Therefore, statistics that are currently available do not give a complete picture on lawful surveillance by state authorities.

According to the decision of the Constitutional Court of Georgia, the State Security Service possesses technical capacity to carry out surveillance and counterintelligence activities bypassing courts and the Personal Data Protection Inspector. Therefore, the proactively disclosed information may not reflect the real situation of secret surveillance.

1. The registry of secret investigative actions must be published according to specific actions of secret investigation (including wiretapping and secret recording of phone conversations, removal and recording of information from a communications channel, from a computer system or installation of respective software in a computer system for this purpose, monitoring of post and telegraphic communications, secret video and audio recording, film and photo shooting, electronic surveillance through technical means).

2. The registry of secret investigative actions must be published according to types of crime, which would enable the comparison of data with statistics on wiretapping and secret recording of phone conversations.

3. Statistics on wiretapping and secret recording of phone conversations must be made available in Excel format (as per commitment included in the Open Government Partnership (OGP) 2016-2017 Georgia Action Plan).

Statistics on duration extensions for existing motions on telephone surveillance and recording in 2016 must be verified.

2016 Statistics on Telephone Surveillance and Secret Investigation in Georgia