On April 24, 2020, the Institute for Development of Freedom of Information (IDFI) published the analysis of simplified procurements related to Covid-19, which included medical equipment and use of hotels as quarantine centers from the period of March 18 until April 15. The analysis outlined that in many cases the supplier companies were donors to the ruling party or established a few days before the signing of the agreement and in some cases, they were functioning in a radically different field before the state of emergency.

This time IDFI looked into the companies with whom simplified procurement contracts were signed for the purchase of various food products in order to provide social assistance to different groups. In addition, the research will review the updated costs of the Ministry of Health and the National Tourism Administration from April 15 to May 11.

By the order of the Government of Georgia of March 26, 2020, for the purpose of creating food reserves, NNLP Rural and Agricultural Development Agency was commissioned to purchase more than 5.000 tons of sugar, 500 tons of pasta and 1,500,000 liters of sunflower oil. In the framework of this procurement, the Agency for Rural and Agricultural Development requested simplified procurement of 16 million Gel from the Agency of Procurement on the grounds of limited period of time for making a purchase. Within the context of this request, 2 agreements were signed.

It is significant to mention that according to the appendix to the agreement, Mziuri Ltd provides Russian products. Additionally, the director of Mziuri Ltd is Shota Basilashvili and the member of the supervisory board is Dimitri Ramishvili. Both of them on the same day donated 80-80 thousand Gel to the Georgian Dream and Salome Zurabishvili.

Akaki Akhvlediani is the 100% owner of the company who also owns shares in many different companies. Nodar Sabanadze, one of the business partners of Akhvlediani, is a donor to the Georgian Dream and is connected with the Deputy Minister of Internal Affairs, Kakhaber Sabanadze. According to media reports, Nodar Sabanadze is also behind one of the sewing companies, which the Ministry of Economy and Sustainable Development of Georgia LEPL Enterprise Georgia has instructed to produce so-called gauze face masks in the framework of the "Produce Veil" project.

Also, on April 3, a simplified purchase agreement for 5,000 tons of sugar and 500 tons of pasta was signed with Alpha Ltd., with the total amount of USD 2,808,400, with an official exchange rate at the date of signing of GEL 8,934,362.92. At this stage, the act of delivery and acceptance has not been uploaded yet. It is important to note that some of the products in this purchase, in particular, 500 tons of pasta are also of Russian production, in which the state paid $ 212,400.

Koba Kurdghelashvili, who was a member of the parliament of the 7th convocation from the United National Movement, owns 100% of Alpha Ltd. However, in 2016 Alpha Ltd donated 120,000 GEL to the Georgian Dream. Kurdghelashvili's participation is recorded in 9 other companies, his business partners in various companies are both Georgian Dream donors or affiliated with the ruling party.

The Municipality of the self-governing city of Rustavi approached the Procurement Agency on March 20 with a request for the right to simplified purchase of various food products based on the urgent need for Covid-19. Based on the consent received, from March 25 to May 11, 17 simplified procurement contracts were signed, the total value of which amounted to GEL 411,532. In all cases, there is only one supplier - Madagoni 2 Ltd. The company is registered in Rustavi, its director is Yuri Bedineishvili, who donated 60,000 GEL to the Georgian Dream in 2016.

On a similar basis, the Municipality of Gardabani has approached the Procurement Agency several times and, with the consent, has signed 5 contracts with Madagoni 2, the total value of which amounted to GEL 243,741. The company received a total of more than GEL 655,000 through simplified procurement related to Covid-19.

Updated procurements of Ministry of Health

On April 24, 2020, the Ministry of Health of Georgia signed another simplified procurement contract, for purchasing rapid tests of Covid-19. The total cost of this purchase is 930,000 GEL, with a total of 30,000 units - the cost of each test is 31 GEL. In the contract, it is mentioned that the Netherlands is the country that produced the product and the company that delivered the tests to Georgia is Solemart Ltd. Zurab Tukvadze is the director and owner of 100% of its shares. No suspicious links were found directly with him, although his business partners in other companies are donors to the ruling party and have donated a total of 63,000 GEL.

According to media reports, the rapid tests are in fact Chinese-made, and the Dutch company has sealed them with its own label. Importantly, there are questions about the accuracy of the tests as well. Following the release of the information, on May 12, Solemart Ltd. founder Zurab Tukvadze announced that the Ministry of Health had terminated the contract with him on May 8 because he could not provide the product at the time specified in the contract. However, no such agreement has been uploaded to the e-procurement system yet.

On April 27, the Ministry of Health signed a contract with Geo Sky Ltd. to receive an air service in the direction of Tbilisi-Beijing-Tbilisi. The flight was scheduled on April 27-28-29 to deliver the medical products.

After April 15 the Tourism Administration has signed a total of 8 contracts worth up to 690 thousand GEL to use hotels as quarantine centres. The administration is served by the same hotels with which it had previously cooperated, although this time the prices are different. For comparison, the contract with Tskaltubo Resort, which provided services from March 31 to April 30, did not specify the price of one room and the cost of food per person, and the hotel received a total of 1 million 330 GEL from the state for renting 118 rooms for 31 days. The new contract covers the period from May 1 to May 31, and this time the hotel will receive 214 thousand GEL for 120 rooms for 31 days, which is 1.1 million GEL cheaper than the previous contract.

As for other hotels, the old price was maintained in the contract of Hotel 444, and in the service of Ambassador Kachreti, the state again paid only for the disinfection. Room and food services were provided free of charge to citizens in quarantine by the hotel. In all other cases, the prices are significantly reduced.

In addition, one contract was signed with Hotel Tbilisi Sheraton, with which the administration has not previously cooperated. Sheraton provided 200 rooms and services to the state free of charge and received a disinfection fee of GEL 15,800 in return. 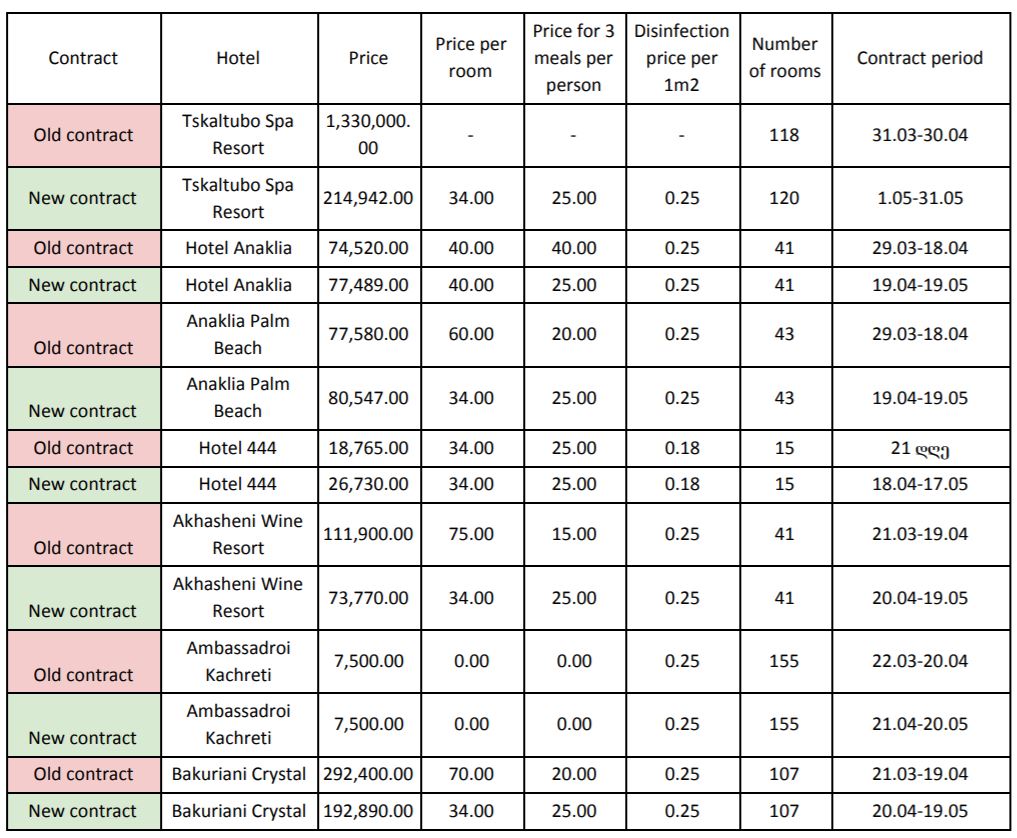 These changes may be related to the May 4 resolution of the Government of Georgia, which amended the Resolution on the Approval of the 2020 State Health Care Programs. Paragraph 4 (a) of the document stipulates that the hotel services of the quarantine spaces will be reimbursed at the actual cost, but not more than 100 GEL per day for each beneficiary.

The data presented in this paper shows the following problems with simplified procurement related to Covid-19:

-  As in the case of medical devices, contracts for the purchase of food products are in some cases signed with companies donating to the ruling party, in the case of municipalities, contracts are often signed with one supplier. This fact raises questions about the process of selecting companies for simplified procurement, as in this case an electronic tender procedure is not conducted and the procuring entity has the freedom to directly select the supplier company.

-  A government decision on May 4 to set a maximum of GEL 100 per person per day at a quarantine hotel is too late, and an analysis of hotel agreements shows that by adopting such regulation in a timely manner, the state could have saved millions when renting hotels.

The study was prepared within the grant for Good Governance for Georgia (3G) project from the global philanthropic organization,Luminate. The Institute for Development of Freedom of Information (IDFI) is responsible for the content of this analysis. Views expressed in therein do not reflect the position of Luminate.