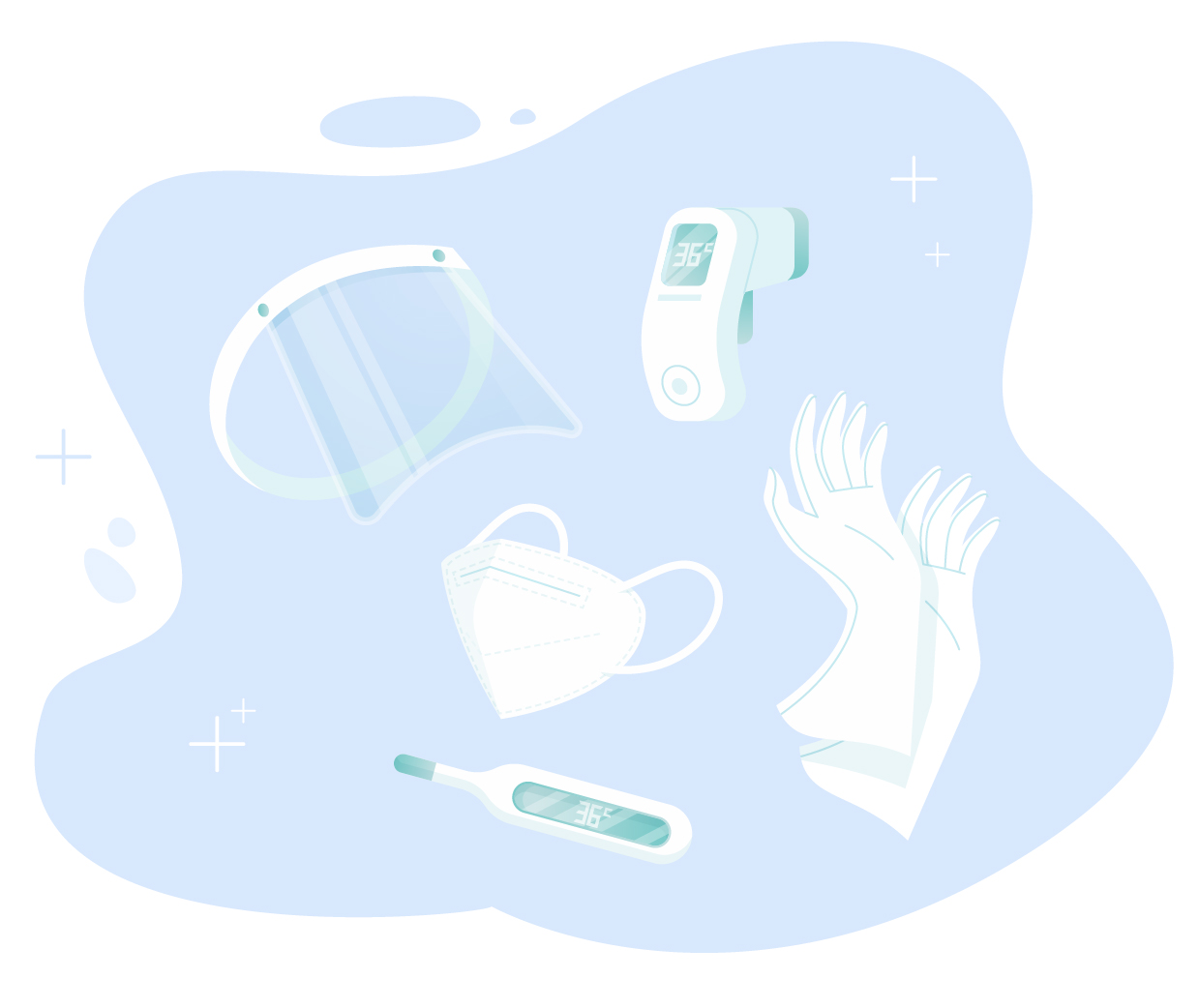 On February 26, 2020, the first case of Covid-19 was reported in Georgia. Since March 21, the state of emergency and curfew were declared, several restrictions were applied including intercity and city mobility restrictions. The following changes had a serious impact on the public procurement process.  The state needs  a quick response against Covid-19, which means that the time required to purchase the necessary goods/services is limited.

The government agencies, whose direct obligation is to fight the virus in different directions, no longer utilize electronic tenders, as this procedure requires a long time. Under the procurement legislation, this is an urgent necessity, which allows public institutions to use simplified procurement procedures instead of electronic tender to purchase the required products/services. To do this, each government institution needs the consent of the Procurement Agency. However, in most cases, consent is asked only after the purchase, instead of prior agreement.

IDFI looked into the simplified procurements performed during the current emergency situation, to learn which products or services are mostly procured, the amount of funds spent on these procurements  and the companies receiving these funds.

For the following analysis, the data of the Simplified Procurement Agreement Module (SMP Module) of the electronic Government Procurement system is used. The data covers contracts from March 18 to April 15 and includes two main procurement categories: medical equipment and hotel services for the quarantine.

Covid-19 related simplified procurement of the Ministry of Internally Displaced Persons from the Occupied Territories, Labour, Health and Social Affairs of Georgia.

The first simplified procurement agreement of the Ministry of Internally Displaced Persons from the Occupied Territories, Labour, Health and Social Affairs of Georgia, with the purpose of fighting coronavirus, was signed on March 18, 2020. After that, 33 simplified procurement contracts have been signed, with a total cost of more than GEL 10 million 520 thousand.

Medical equipment, in turn, considers many different products, but facemasks dominate in terms of quantity and price. The next most purchased products are special medical clothing, a surgical robe,  biological protection suits and etc.. (See graphics). It should be noted that the Ministry also purchased 30 units of artificial respiration equipment. This purchase was made on March 18 and the cost amounted to more than GEL 616 thousand. 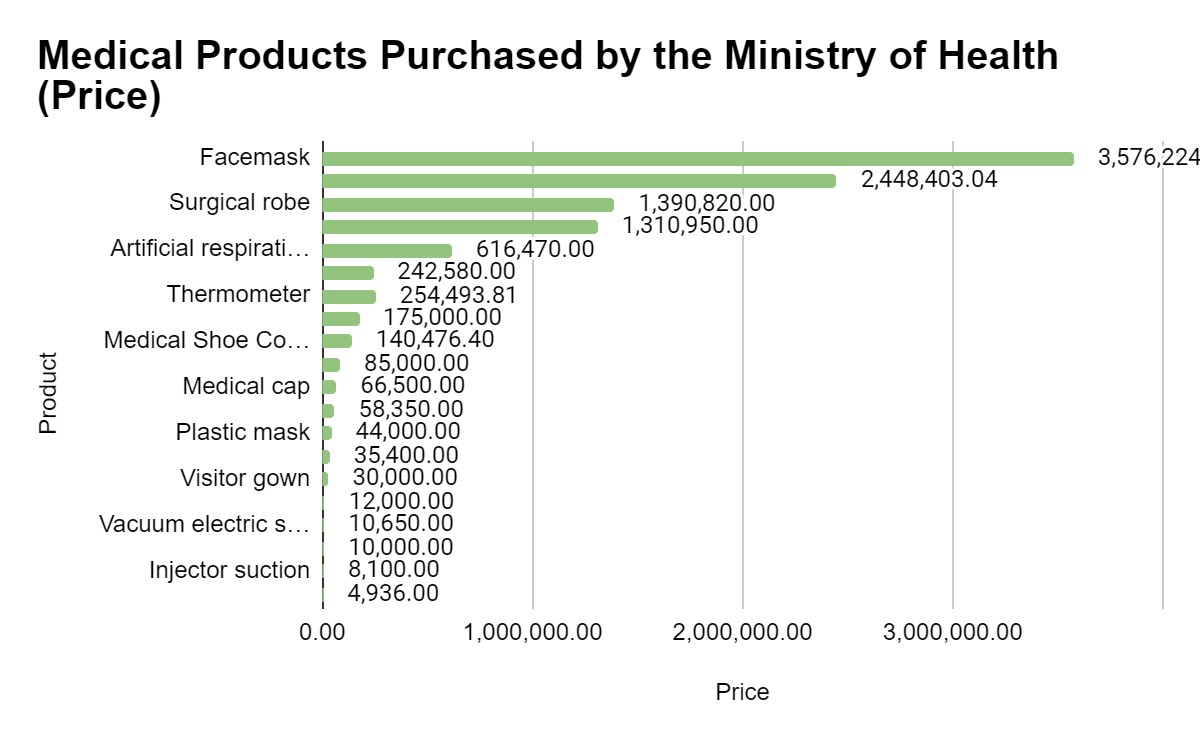 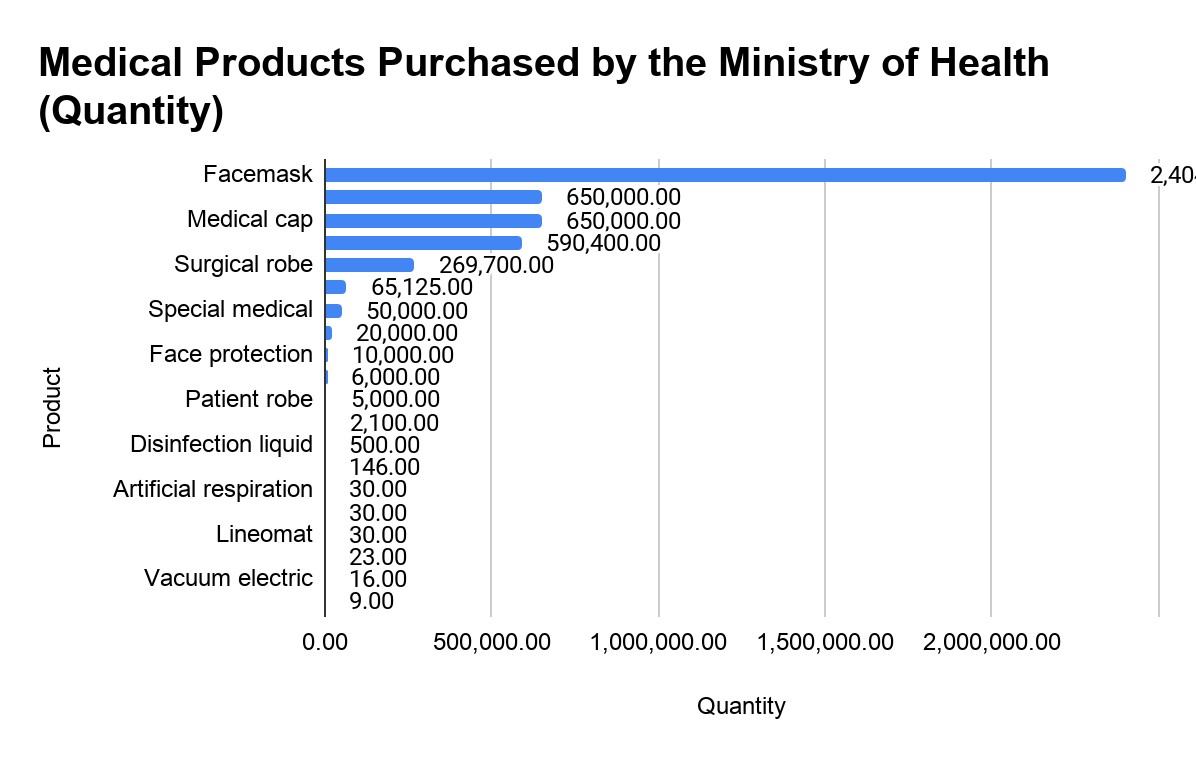 Lately, there have been numerous questions towards the government regarding facemasks. After it became known that there was a shortage of face masks in the international market, the Government of Georgia decided to solve the existing problem by promoting local production in partnership with the private and public sectors.

A special registration form for the production of face masks has appeared on the website of the Ministry of Economy and Sustainable Development of Georgia LEPL Enterprise Georgia, which can be filled out by any party interested in the production. The form is preceded by the specification for the face mask, which matches with so-called gauze face mask:

As the companies involved in the project later pointed out, the government is providing them with the material needed for the production. Nevertheless, according to the Minister of Economy, the production of each face mask costs more than 1 GEL, and the state subsidizes the price of the goods sold on the market, so that the price of the face mask for the public is 0.50 GEL.

According to the LEPL Enterprise Georgia website, at this stage, the 9 companies are involved in the project 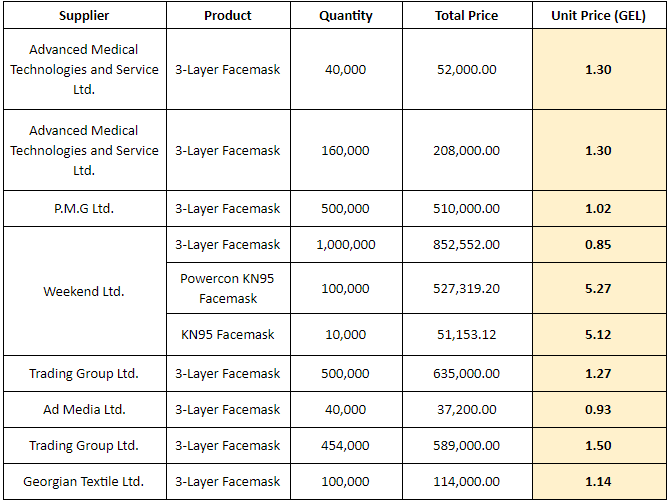 As can be seen from the given table, the lowest price of the unit is GEL 0.85. The purchase agreement states the amount in US dollars, and according to the invoice, the value of each three-layered face mask is 0.27 cents. The contract was signed on April 6, so the amount set for the estimated price is multiplied by the exchange rate on that day. From the same supplier, the Ministry purchased two different types of so-called N95 face masks, the prices of which are about GEL 5.

Except for face masks, the ministry purchased contactless thermometers, special medical clothing and medical shoe covers from this company, for a total of $ 1 million 330 thousand (at the official exchange rate of April 6 more than GEL 4 million 200 thousand).

The second lowest priced company is Ad Media Ltd. The unit price of their face mask was 0.93 GEL, but they only received an order of a total of 40,000 masks from the Ministry of Health. Sergo Galustiani is one of the shareholders of the mentioned company. He also owns 100% shares of another company "Respirator", which was registered 3 days ago, on April 15, 2020, and produces 4 million facemasks for the Cartu Foundation. Galustiani donated GEL 60,000 to Salome Zurabishvili in 2018 and has also donated GEL 40,000 to the Georgian Dream.

On April 3, the Ministry purchased plastic masks, 20,000 units for GEL 44,000, bringing the price of each mask to 2.20 GEL. According to the agreement, the Ministry purchased the product from Edwings Ltd. This company was registered on March 12, 2019, and has no experience in participating in e-tenders and only has been contracted through simplified procurement. The first contract for simplified public procurement was signed by the company six months ago. Notably, the contract with the Ministry of Health was the biggest recorded for this company. Giorgi Taktakishvili, one of the founders of the company, was a donor to the Georgian Dream in 2014.

Except for the different kinds of face masks, the Ministry of Health has purchased a large number of biological protection suits.

On April 6, 2020, the procurement contract was signed with one of the biological protection suit supplier companies - Geoferum Ltd., whose main activity is the realization of metal building materials. The company was founded in 2019 and has never participated in public procurement since. With this purchase, Geoferum received more than half a million GEL and in return, agreed to supply 14,100 units of biological protection suits in 10 working days. The founder of the company is Levan Lursmanashvili. Interestingly, he owns a 100% stake in Geoorto Ltd., an importer company of medical devices with experience in both electronic and simplified public procurement. Presumably, the reason why Lursmanashvili failed to get a contract on behalf of this company is that Geoorto Ltd. is currently blacklisted (for committing an unconscionable act in order to obtain the right to enter into a public procurement contract).

Use of hotels as quarantine centres

LEPL Georgian National Tourism Administration has signed 87 simplified procurement agreements for the arrangement of quarantine spaces in hotels, the total cost of which is GEL 25 million 579 thousand. Table [2] lists the hotels that cost the government more than half a million GEL. It should be noted that repeated agreements have been signed with several of these hotels.

As can be seen from the table below, the largest amount under one contract should be paid to Sairme Resort, the two-month rent of 210 rooms (with meals and disinfection) costs more than GEL 2 million. The lowest amount is paid to the hotel "Ibis Styles Tbilisi" - the State had to pay GEL 3,004 only for disinfection. 100 rooms and three meals a day were provided for free by the hotel. 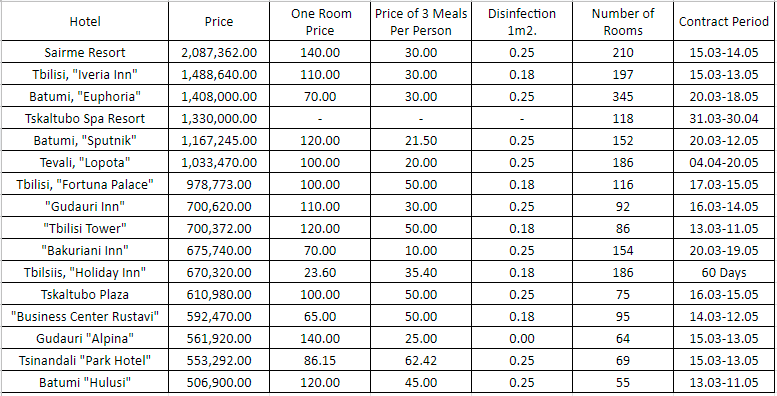 The Ambassador Hotel Kachreti did the same, where 155 rooms and three meals a day were provided free of charge, and the State only paid for the disinfection, which cost a total of GEL 7,500.

LEPL Georgian National Tourism Administration under a single contract has rented the most, 345 rooms from Batumi Hotel "Euphoria", which cost GEL 1,408,000. The owner of the hotel is JSC "Metro Euphoria Hotel Batumi", which owns hotels of different names both in Batumi and in Tbilisi. In total, after March 25, the company received 5 simplified procurement contracts from the National Tourism Administration, the total value of which exceeded GEL 2 million 363 thousand.

The Department of Tourism and Resorts of the Autonomous Republic of Adjara has spent up to GEL 4 million on arranging quarantine spaces in hotels. 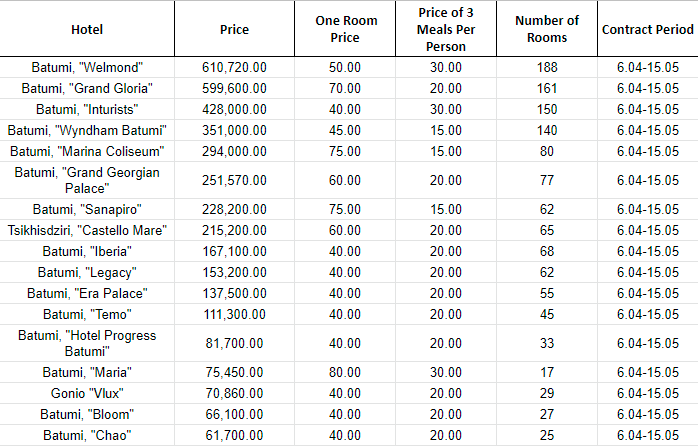 In the case of Adjara, the highest total price was with Hotel Velmond, the highest price per unit room, the amount of GEL 80, with the hotel "Maria". A service fee of Hotel Intourists is GEL 428,000, which also belongs to the above-mentioned JSC "Metro Euphoria Hotel Batumi".

The analysis presented in this document covers a one-month data of simplified procurement related to COVID-19, in only two directions. Nevertheless, the study outlined the following problems:

-          In the case of simplified procurement, there is a risk that the state budget funds will be concentrated with companies that donate or are affiliated with the ruling party, therefore it is necessary to give a substance to  the selection of the supplier company and advantages they had over other companies;

-          In the case of simplified procurement, the product specification is not uploaded in the system, as well as the documentation of the products provided by the supplier, which often makes it impossible to assess the quality of the delivered products.

-          Due to the lack of competition, selection precepts of the supplier companies  are unclear.   Since it is impossible to assess the quality of supplied product, the grounds of contract termination are also vague, notably when the same product is purchased from other companies at a higher price.

IDFI plans to continue studying various areas of simplified procurement during the pandemic and assess the process.