Presentation of the Memorial Album of Nikoloz (Karlo) Chkheidze

On November 25, the Institute for Development of Freedom of Information (IDFI) in collaboration with the National Library of Georgia held the presentation of the memorial album about the life and work of a prominent public figure of the First Republic of Georgia, Nikoloz (Karlo) Chkheidze. The album includes the archival and photo materials that have not been published before, extensive annotations and the details of Karlo Chkheidze’s biography and public work.

Giorgi Kldiashvili – the Executive Director of IDFI, Mirian Khositashvili – Deputy Director-General of the National Parliamentary Library of Georgia and Anton Vatcharadze – the Archives Direction Head and creator of the album made speeches at the presentation. Historians, researchers and the representatives of the civil sector also attended the event. 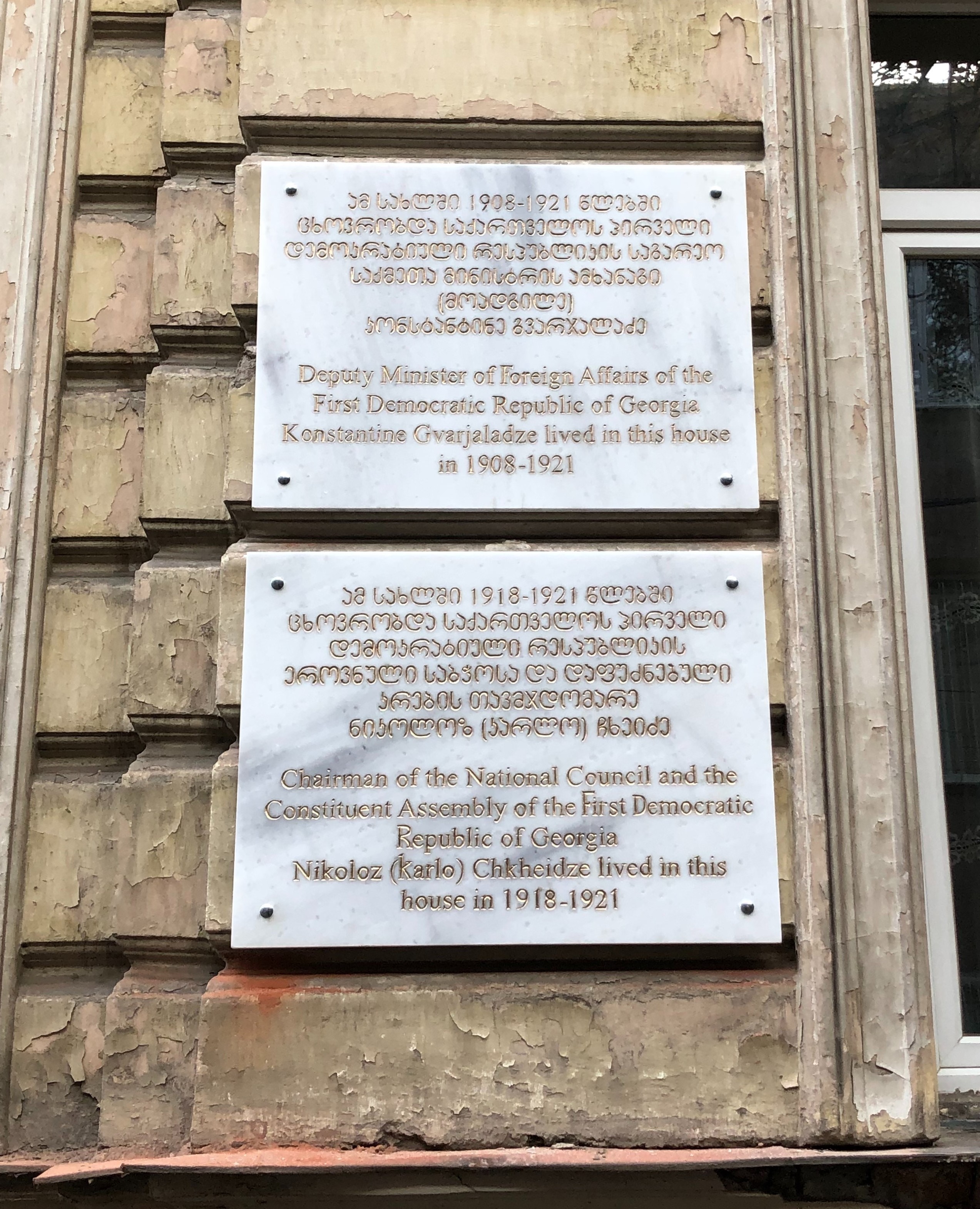 Karlo Chkheidze was an important political figure in the Russian Empire, a distinguished member of the Social-Democratic Party and played a huge role in the developments after the February Revolution in Russia, specifically in Petrograd. After the collapse of the empire, he became one of the founders and leaders of the Democratic Republic of Georgia. He was a chairman of the parliamentary of organs of the democratic republic – National Council and Constituent Assembly. Since 1919, he was the head of the Georgian delegation to the Paris Peace Conference. Thanks to his endeavor and the work of the members of his diplomatic corps, Georgia acquired the recognition from many countries of the world commonwealth. After the occupation of Georgia by the Bolsheviks in 1921, Karlo Chkheidze had to migrate to Paris where he continued active political work for Georgia’s de-occupation. In 1921, diseased Karlo Chkheidze who had been in severe moral conditions tragically ended his life as he committed suicide. 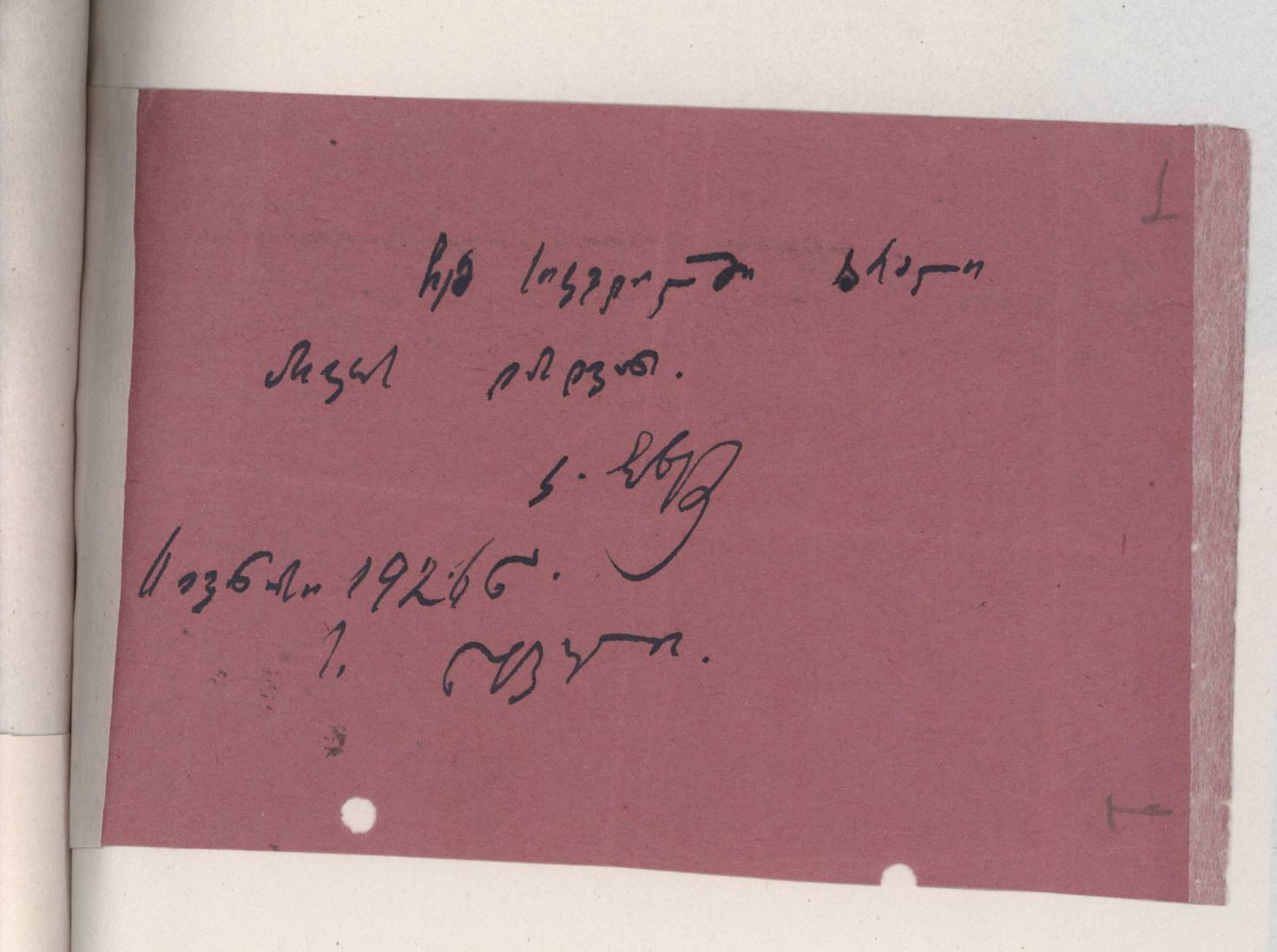 Karlo Chkheidze's suicide note: „Do not accuse anybody for my death“ (June 6, 1926)
The document preserved at the National Archives of Georgia

The Executive Director of IDFI, Giorgi Kldiashvili made a welcome speech:

We are happy that we have been honored to praise the work of the chairman of the National Council and the Constituent Assembly of the First Republic of Georgia, Nikoloz (Karlo) Chkheidze through the two activities: first, we have published a memorial album, describing the greatness of his political endeavor and the tragedy this person bore throughout his life. Second, we have placed his and the Deputy Minister of Foreign Affairs of the First Republic of Georgia, Konstantine Gvarjaladze’s memorial plaques on the façade of the house where Karlo Chekheidze spent the short period of his life (as long as he lived and worked in Tbilisi for a short time).

Karlo Chkheidze was a world-class social-democrat politician of his time. He played a huge role during the February Revolution of 1917 in Russia. For months, he had been one of the key politicians of the provisional government established on the ruins of the Russian Empire. Unfortunately, as a result of the October Revolution, the violent and ruthless power, as well as the disagreement between Karlo and his allies, forced him to leave the Russian politics. Otherwise, arguably, if the provisional government had remained in power in Russia, the developments in the region, Georgia and the world, in general, would be different.

After his arrival to Georgia, Karlo Chkheidze was the most experienced politician in Georgia and for this, he was a chairman of the parliamentary organs of the Democratic Republic – National Council and Constituent Assembly. Considering his experience and important international contacts, the delegation of the Georgian mission in Europe trusted him. At that time as well as today, the key for Georgia’s survival was in the West and Chkheidze had been endeavoring for this as the head of the delegation of the First Republic of Georgia at the Paris Peace Conference for a year. This struggle turned out to be successful as long as several dozens of European and non-European countries recognized Georgia as a sovereign state.

Unfortunately, the violent and ruthless power reached to the Georgian borders soon… Also with the help of the Georgian Bolsheviks, Russia reoccupied Georgia and the progressive development we had 100 years ago which was distinguished for its western values was interrupted for the next 70 years. The democratic government of Georgia attempted to counter the occupiers in emigration but their struggle turned out to be unsuccessful and Karlo Chkheidze died tragically there.

The most interesting details that had been known before and we reasserted include the social responsibility the authorities in the First Republic had. For example, Karlo Chkheidze’s communal, travel and other expenses are provided in the documents. These materials show how economically the politicians lived those times. A good example of this is that Karlo Chkheidze did not have his own flat in Tbilisi and Konstantine Gvarjaladze allotted space in his house, located on 4 Zurab Chavchavadze Street, to him. When we point to politicians at social responsibility and provide examples of how Austrian, Norwegian or other foreign politicians use public transport, we can equally provide examples of Karlo Chkheidze, Konstantine Gvarjaladze and the other politicians of the First Republic of Georgia. 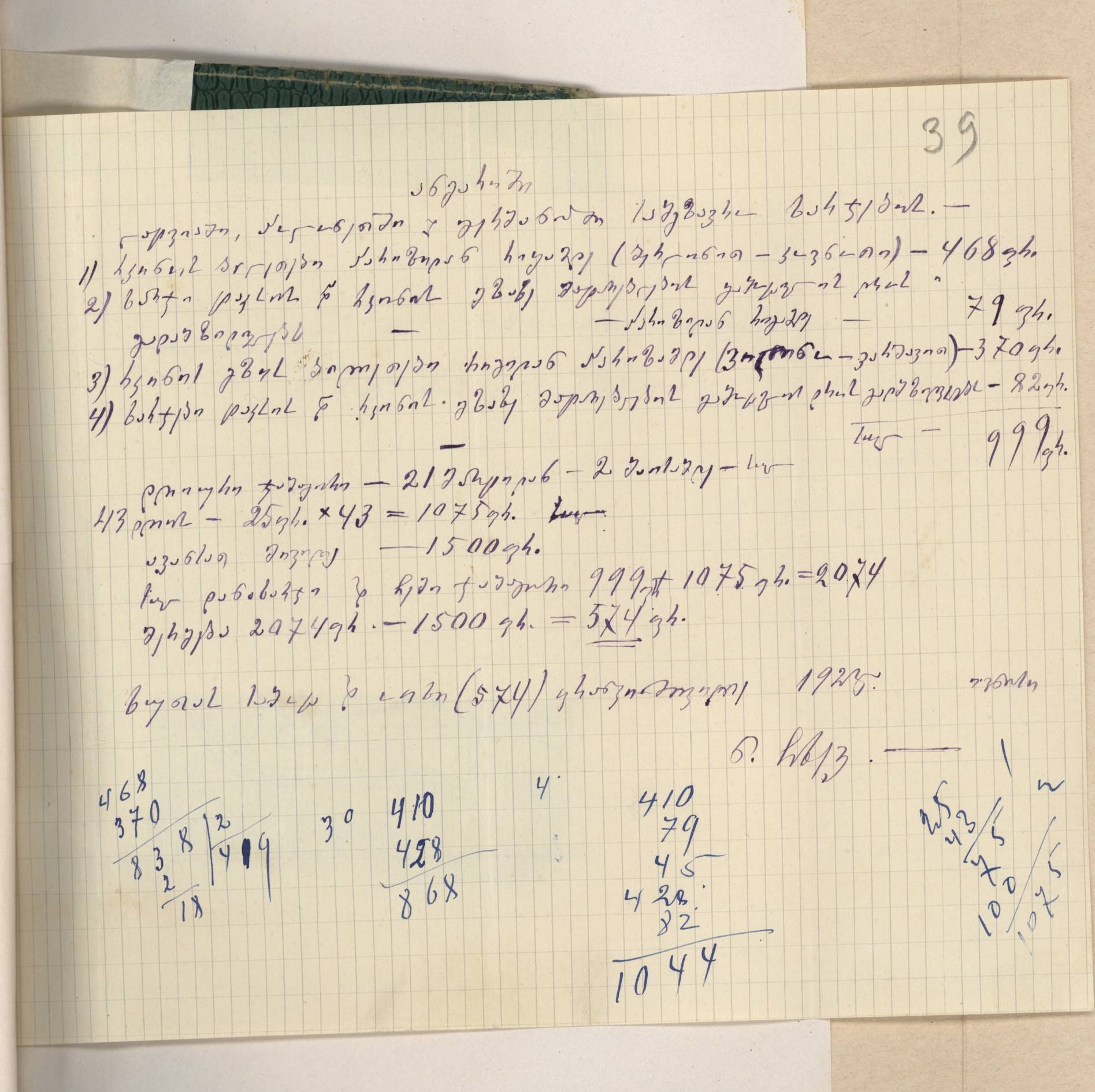 Karlo Chkheidze's financial statements about his business trip (June 1923)
Karlo Chkheidze was paid an amount of 25 Francs during the trip, as well as covering his travel expenses
The document preserved at the National Archives of Georgia 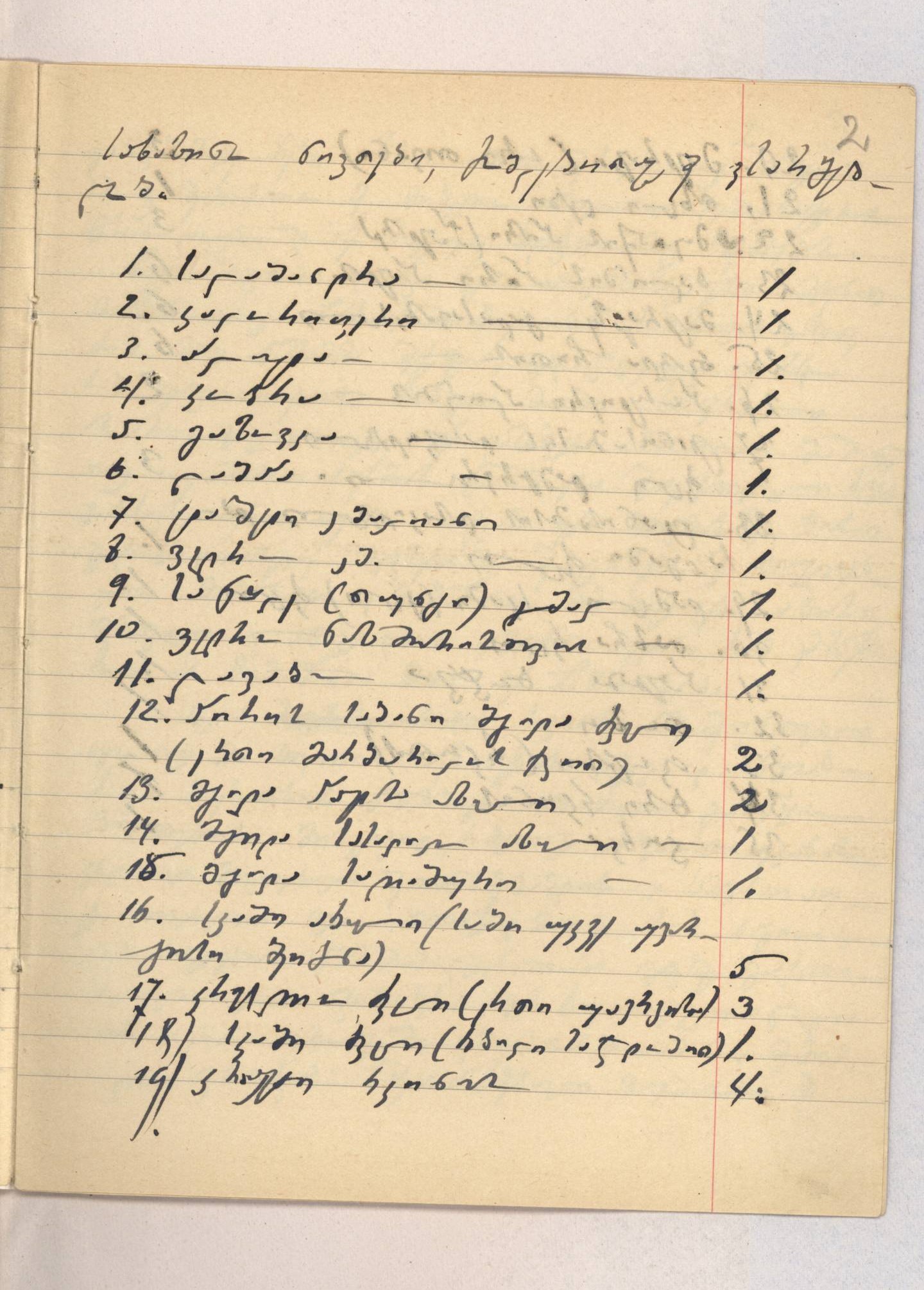 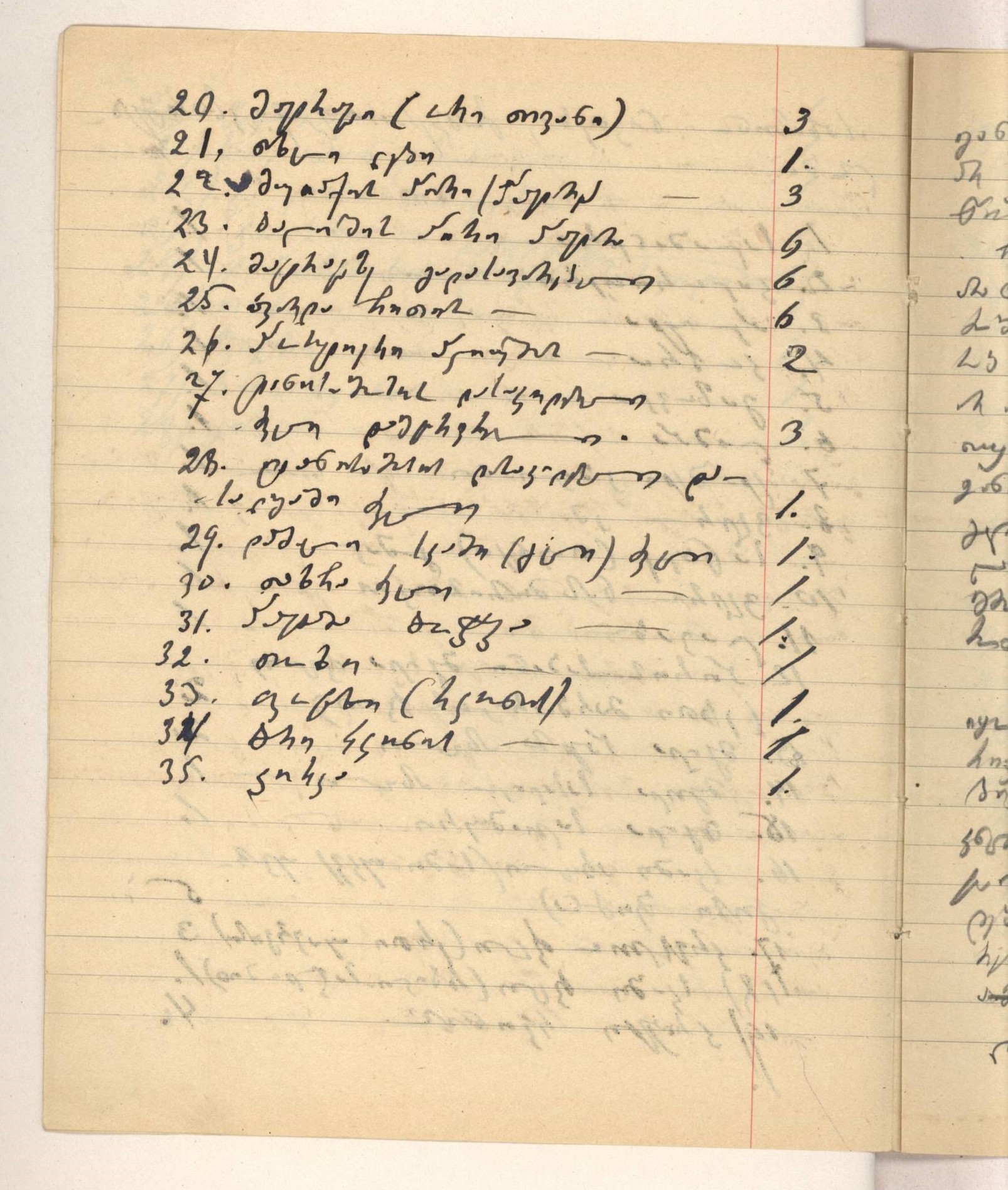 I can inform you with great honor that if you go to 4 Zurab Chavchavadze Street, you will see the memorial plaques of Karlo Chkheidze and Konstantine Gvarjaladze there. For this, I would like to thank the head of the Culture, Education, Sport, and Youth Affairs Civil Service of Tbilisi City Hall, Maka Nasrashvili personally who has helped us find our way through the bureaucratic labyrinth. The building where the plaques are placed is a cultural heritage and we had to go through many procedures for achieving the result. Maka was a member of the Tbilisi City Hall staff without whom this would be impossible as she took the responsibility for many details. Thanks to Maka for this!

On behalf of IDFI we thank the following persons:

Mirian Khositashvili – the Deputy Director-General of the National Library. Without him, the creation of the album would be impossible. The library took the responsibility of printing the album and not only. They also helped us find the relevant materials preserved at the library and request the documents from the archives that are, unfortunately, too expensive and not accessible for everyone.

Mirian Melua – Karlo Chkheidze’s descendant. He gave us important documents and photos preserved in their family.

Nata Kubaneishvili – a designer who suggested a beautifully designed album.

Irakli Iremadze – for writing an introduction and a brief biography for the album.

Giorgi Mamoulia – a specialist of the First Republic of Georgia who gave us valuable recommendations while working on this album.

Esma Mania – who edited the Georgian annotations of the album for free. Esma is one of the best specialists in the Georgian language and in this regard, the album is flawless.

Giorgi Bejanishvili and Nikoloz Sepiashvili – who edited the English version of the album.

And, of course, the Head of Archives, Soviet and Memory Studies direction at IDFI, Anton Vacharadze! The publication of the album was his idea and he was the initiator of this project. Without any funding, he collected the information, documents, photos and other materials on his initiative and worked on the preparation and publication of the album.

Karlo Chkheidze’s album is only a beginning. We want to create albums and memorials depicting the life of other prominent persons. The state offices have already published the albums about Noe Zhordania and Noe Ramishvili but there are no albums about Akaki Chkhenkeli, Irakli Tsereteli, Benia Chkhikvishvili, Evgeni Gegechkori and others who established the First Republic of Georgia".

The organizer of the event is IDFI in collaboration with the National Parliamentary Library of Georgia. The financial supporter of the event is the Open Society Budapest Foundation within the frame of the project “Enhancing Openness of State Archives in Former Soviet Republics and Eastern Bloc Countries”.