The Institute for Development of Freedom of Information (IDFI) is implementing several projects aimed at raising awareness about the Democratic Republic of Georgia and commemorating the 100th anniversary of its creation. One such project involves publishing a memorial album featuring Nikoloz (Karlo) Chkheidze, a prominent politician of the time. The album will include previously unpublished archival and photo materials, with extensive annotations and details about Karlo Chkheidze's biography and work.

IDFI obtained several documents kept in the National Archives of Georgia, including: files filled out by Karlo Chkheidze, indicating that he lives at two addresses at various times: 4 Ksenievskaia Street, Gvarjaladze apartment; and Ksenia Street, house N4, tel. 15-00. The latter address is also shared by another prominent political figure and diplomat Konstantine Gvarjaladze.

The former Ksenia street (renamed to Amo street after Sovietization, and later Sherozia street), is called Zurab Chavchavadze street today (source: Tbilisi, Streets, Avenues, Stadiums, Encyclopedia, 2008). This is the street where both Nikoloz (Karlo) Chkheidze (in 1917-1921) and Konstantine Gvarjaladze (probably from 1908 to 1921) lived.

Nikoloz (Karlo) Chkheidze (1864-1926) was a prominent politician during the times of the Russian Empire and the First Republic of Georgia. After the Russian Revolution of February 1917, he was a member of the Presidium of the Provisional Committee of the State Duma, which governed the country before the creation of a Provisional Government. In March 1917, he was elected first as the First Chairman of the Petrograd Soviet of Workers' and Soldiers' Deputies, and then the First Chairman of the All-Russian Central Executive Committee. After returning to Georgia in 1917, he presided over three legislative bodies: Transcaucasian Parliament, National Council of Georgia and the Democratically elected Constituent Assembly. From 1919 he led Georgia's mission to the Paris Peace Conference, playing an important role in achieving Georgia’s international recognition by many countries. Following the occupation of Georgia, from February 1921, Karlo Chkheidze continued his political work in emigration by publishing letters, meeting with European politicians and trying to raise the issue of Georgia’s liberation. Karlo Chkheidze lived in extreme poverty after emigration, which significantly damaged his health. In 1926, he committed suicide and was buried at Pere-Lachaise cemetery in Paris. 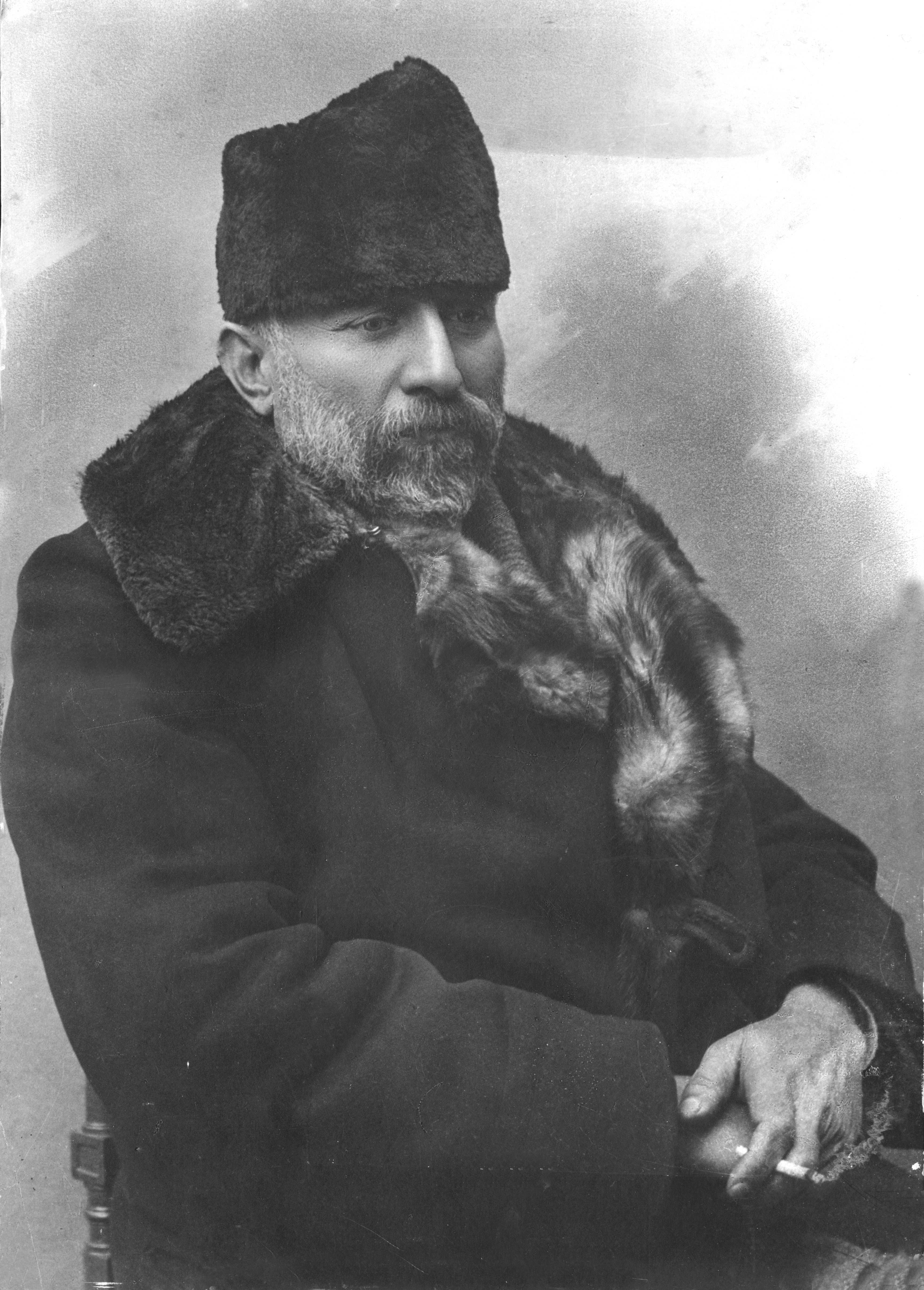 Konstantine Gvarjaladze (1883-1969) was a member of the Central Committee of the Social Democratic Party. On May 26, 1918, he signed the Act of Declaration of Independence of the Democratic Republic of Georgia. In 1917 he became a member of the Georgian National Council and in 1919 - member of the Constituent Assembly. In 1918 he was appointed as the Deputy Foreign Minister, taking part in important international negotiations. After the occupation of Georgia, he continued active political work in emigration. In 1920-1928, he was the delegate of the Social Democratic Party of Georgia at the Socialist International Congress of Geneva and Brussels. In the 1930s, he was the publisher of the official newspaper of the Foreign Bureau of the Georgian Social-Democratic Workers' Party titled Voice of Battle. Konstantine Gvarjaladze passed away in 1969 and is buried at the Georgian cemetery in Leville. 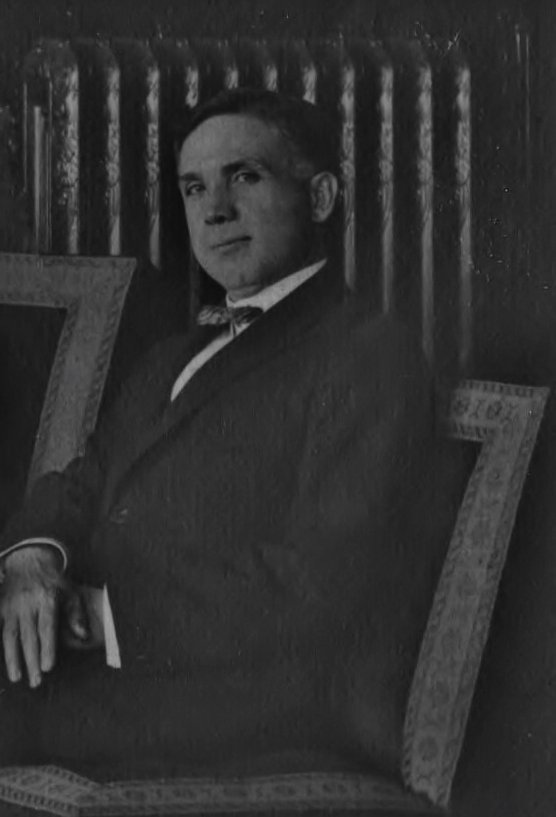 The fact that Karlo Chkheidze, Chairman of the Parliament of Georgia chose to share a house with another member of government points to high political culture during the First Republic of Georgia to save as much public funds as possible in an impoverished country. Conversely, the willingness of Konstantine Gvarjaladze to share his house with Karlo Chkheidze and his family is also notable.

IDFI believes that an important part of keeping the memory of the Democratic Republic of Georgia is raising awareness about the important politicians and public figures of the time. For this purpose, on April 4, 2019, IDFI has appealed to Tbilisi City Hall to allow the placement of memorial boards dedicated to Nikoloz (Karlo) Chkheidze and Konstantine Gvarjaladze in Georgian and English on #4 Zurab Chavchavadze Street in Tbilisi.

We hope that Tbilisi authorities will support the initiative to commemorate the people who played a major role 100 years ago in building the Democratic Republic of Georgia. 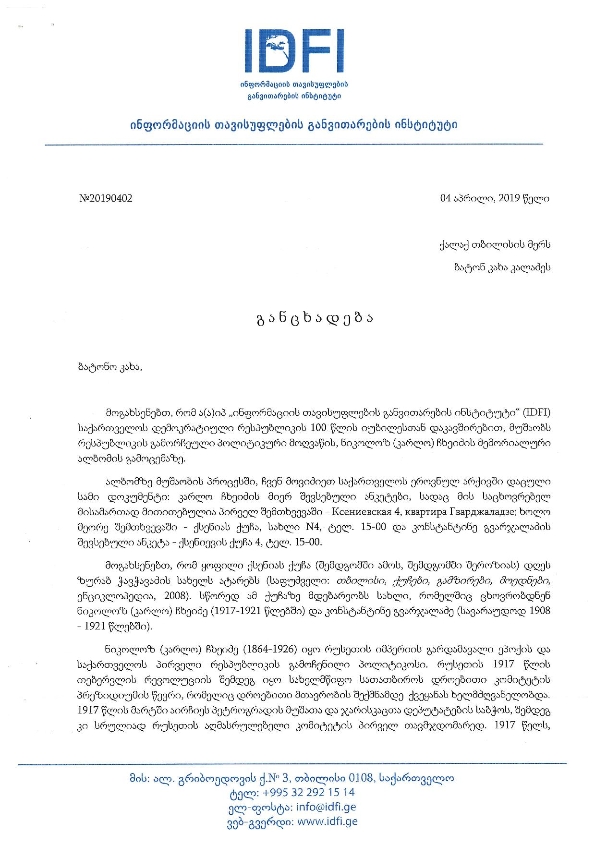