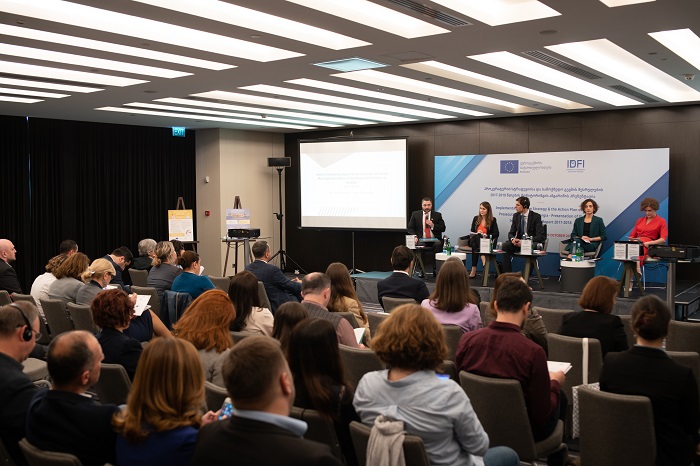 The implementation of the activities set forth by the Action Plan of the Prosecution Service of Georgia (PSG) worsened in 2018 in comparison with 2017.

Today, the Institute for Development of Freedom of Information (IDFI) with the support of the European Union (EU) presented the 2017-2018 interim monitoring results of the Strategy & the Action Plan implementation by the PSG.

Event participants were welcomed by Giorgi KLDIASHVILI – Executive Director of IDFI; and Peter DANIS – Justice Programme Manager from the Delegation of the European Union to Georgia.

In his opening remarks Giorgi KLDIASHVILI, Executive Director of IDFI commented about the challenges related to the Action Plan and its implementation. “Any agency needs a well-structured, ambitious Action Plan in order to achieve its objectives. The objectives set forth by the PSG Action Plan, such as increasing independence of the PSG as a whole and of individual prosecutors, increase public trust towards the PSG, need important and meaningful actions to be defined by the Action Plan and carried out by the Prosecution Service in cooperation with other Government institutions. I hope that the authorities within the PSG take into consideration the findings and recommendations of this report by updating the Action Plan with more ambitious actions and effective monitoring mechanism.” said Giorgi KLDIASHVILI.

“Over recent years several important reforms have been adopted in the prosecutorial system, including the strategy and action plan in 2017. This external monitoring report helps to identify the remaining challenges and possible solutions. We will also follow up in our common projects with the Prosecutors' Office.” – said Peter DANIS, Justice Programme Manager at the Delegation of the European Union to Georgia.

The event attendees from public institutions, local and international organizations also heard about the implementation status of the PSG strategy & the action plan in the regions from the representatives of IDFI’s local partners: Civil Society Institute in Adjara and Association Dea in Samegrelo-Zemo Svaneti.