The given 2017-2018 interim monitoring report reviews progress and defines recommendations for the improvement of achievement of goals and objectives provided in the Strategy & the Action Plan of the Prosecution Service of Georgia.

Analysis of international recommendations and reports, Public Defender reports and public opinion demonstrates that the PSG Strategy and Action Plan take into account all important challenges that the PSG was facing at the time of the development of these documents. However, measures/activities planned to overcome the challenges are often insufficient and unambitious. Furthermore, important reforms (separation of authorities of the Ministry of Internal Affairs and the PSG, detachment of the PSG from the Executive Branch of the government) that were initiated and implemented later are not reflected in the policy documents.

Lack of measures/activities related to some directions of the PSG Action Plan (as well as lack of updating the Action Plan in response to new challenges) and overloading of the Plan with less important activities are obstacles to the achievementof the goals and objectives of the Strategy and therefore is a significant flaw of the Action Plan.

Interchangeable misuse of terms like objective and goal, unspecific and unmeasurable objectives, addition of a column of measures for achievement of goals, under which goals, objectives and activities are mixed up are confusing and present a serious shortcoming of the PSG Action Plan.

Lack of indicators, baseline, mid-term and final targets in the PSG Action Plan is another shortcoming of this policy document and represents a challenge for the monitoring process.

There is a significant disparity between the various sectoral action plans and the Action Plan of the PSG, which is problematic. The PSG action plan does not include all commitments that the institution has undertaken in various formats. The disparity in deadlines for activity completion in various plans could create significant obstacles to the monitoring process, making it confusing and less effective. 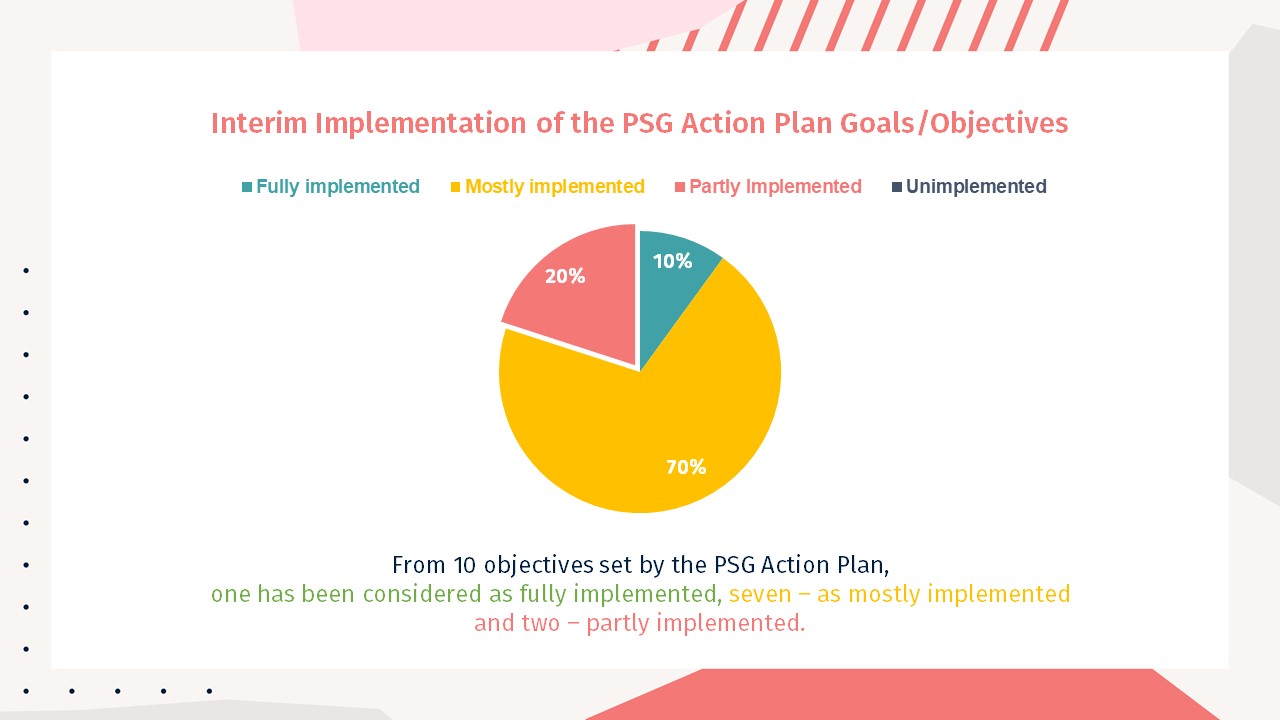 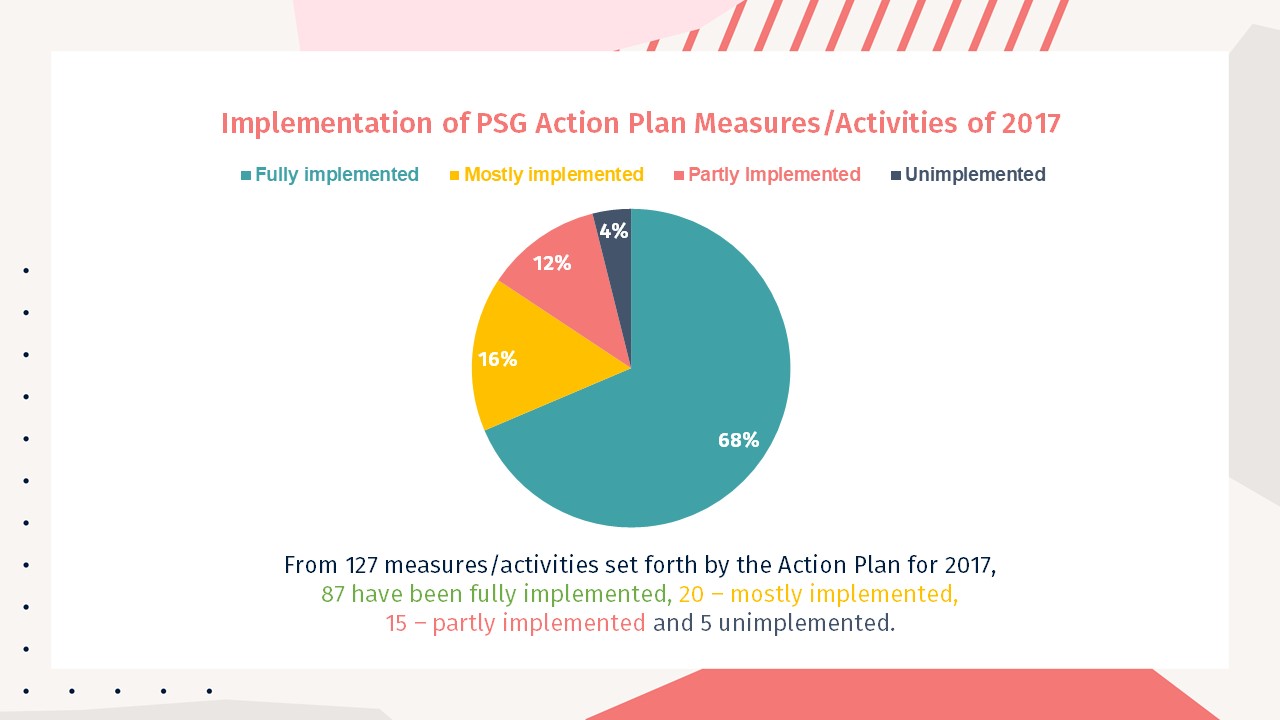 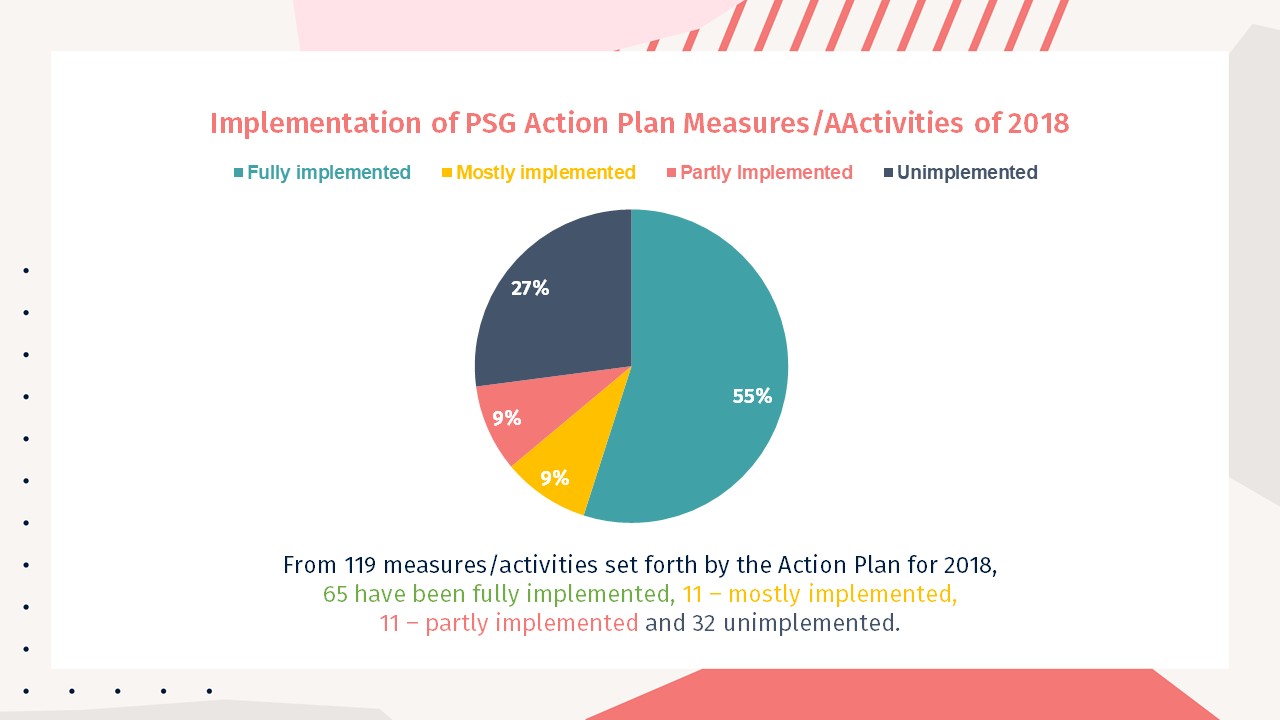 Challenges of particular importance have been identified with regard implementation of the objectives and activities of the PSG Action Plan:

- Reducing authority of General Prosecutor and increasing the role of collegial bodies to ensure independence of individual prosecutors is set forth in the Action Plan, however, in practice effective steps have not been taken in this direction;

- In order to ensure independence of individual prosecutors guaranteeing transparency, fairness and objectivity of their appointment and dismissal procedures is a must. Some progress has been observed in this direction, however, based on the monitoring essential challenges still exist;

- In order to ensure independence of individual prosecutors guaranteeing transparency, fairness and objectivity of disciplinary proceedings within the prosecutorial service is a must. PSG still faces essential challenges in this direction;

- In order to ensure effective prosecution, existence of regulated structured mechanism for monitoring workload of prosecutors is necessary. This has not been carried out;

- In order to ensure effective prosecution, it is also crucial that only or primary specialized prosecutors work on complex cases (cybercrime, crimes committed during legal proceedings (by a public officer), etc.). This still remains as a challenge;

- Effective prosecution of torture and inhuman treatment and of crimes committed during legal proceedings still remains as an essential challenge of the prosecutorial service.

1. PSG should update its Strategy and Action Plan in response with existing challenges and ensure participation of prosecutorial services as well as of public in this process;

2. PSG should ensure introducing the PSG Strategy and Action Plan to its employees and carry out its work based on them;

3. PSG should introduce sufficient and important activities in order to implement the goals and objectives of the Action Plan;

4. PSG should improve its Action Plan  by:

4.4.Separating from each other objectives and goals according to the existing standards.

5. PSG should ensure compliance of its Action Plan with the sectoral action plans where the PSG has undertaken commitments;

6. PSG should improve the worsened implementation level of the 2018 activities;

7. PSG should create effective monitoring mechanism for its Action Plan;

8. To overcome the specific challenges identified in the monitoring process it is important for the PSG to ensure implementation of relevant activities and to carry out additional measures in order to achieve the objectives of the Action Plan, specifically:

8.2.Ensure transparency, fairness and objectivity of appointment and dismissal procedures of prosecutors;

8.3.Ensure transparency, fairness and objectivity of disciplinary proceedings within the prosecutorial service;

8.5.Ensure that only or primary specialized prosecutors work on complex cases (cybercrime, crimes committed during legal proceedings (by a public officer), etc.);

8.6.Ensure effective prosecution of torture and inhuman treatment and of crimes committed during legal proceedings.

The monitoring report was prepared by Institute for Development of Freedom of Information (IDFI) in partnership with the Civil Society Institute (CSI) and Association “DEA”. The initiative is financially supported by the European Union (EU).

Contents of this report are the sole responsibility of IDFI and its partners, and do not necessarily reflect the views of the EU.