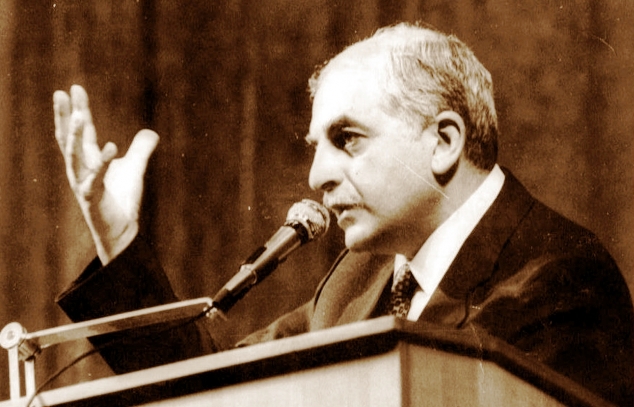 Today is the birthday of the first President of Georgia Zviad Gamsakhurdia. Furthermore, on March 31, 1991 the referendum was held on the issue of Georgian statehood. The overwhelming majority of Georgians supported the restoration of the independence of Georgia. In connection to this date, IDFI continues to publish declassified archival documents. This time, the report sent from US Embassy in Moscow to US Department of State is released.

Late on March 31, Poloff arrived in Georgia. The same day Georgia was holding referendum on independence. During the visit, Poloff met several times with Gamsakhurdia. They discussed not only tense relations with Moscow, but critical situation in South Ossetia. According to Gamsakhurdia, during the phone conversation on February 25, Gorbachev warned him that if Georgia does not sign the union treaty, Georgia should expect more political turbulence.

Gamsakhurdia showed to Poloff telegrams from Gorbachev and USSR Interior Minister Boris Pugo, demanding to follow Center’s (Moscow) decrees or face the consequences. Gamsakhurdia firmly states that Georgia will not even participate in the process of the union treaty negotiation. In his opinion, the Center stimulates the Ossetian problem, and Gorbachev refuses to have dialogue with him on this issue. Gamsakhurdia blamed chairman of USSR Soviet on Nationalities Rafik Nishanov for manipulation in Ossetia. He asserted that the arrest of Kulumbegov (Chairman of the South Ossetian Supreme Council) was “the only way to stop bloodshed and defuse the situation”.

Only after Georgia becomes independent, is Gamsakhurdia willing to allow Ossetians to hold referendum on the issue of autonomy. Currently, he is not sure that Ossetians truly want autonomy, and are not driven by the Center. The document notes that Gamsakhurdia refers to Ossetians and their leaders as “criminals” and “terrorists”. He asserted that he ordered to stop Tskhinvali blockade but “bands of criminals continued to sabotage the Ossetians”. To Poloff’s question that this might bring suffering on innocent Ossetian’s and Tskhinvali children, Gamsakhurdia answered that by demanding autonomy Ossetians brought troubles on themselves. He also declared that “bands of Ossetian criminals” are fighting each other, which Ossetians deny.

On April 2, Poloff and Gamsakhurdia watched news program “Vremya” in the building of Supreme Soviet of Georgia. The program broadcasted violence in Tskhinvali. According to Gamsakhurdia, the Center is dissatisfied with independence referendum results and plans to intervene militarily in South Ossetia, or even take over whole of Georgia.

On April 3, Gorbachev started to send additional troops in South Ossetia. During a phone conversation with Chairman of USSR Supreme Soviet Lukyanov, Gamsakhurdia warned that additional military deployment would only increase bloodshed and the whole responsibility is placed on Gorbachev. Gamsakhurdia told Poloff that the Center was delivering weapons to Ossetians through the Soviet army. He showed Poloff the Soviet army weapons confiscated from Ossetians, including rockets that were used in Afghanistan, and now claimed the life of a Georgian family of five, in a village near Tskhinvali. The document stresses that Gamsakhurdia used this exhibition to exemplify that not only Ossetians are suffering in this conflict.

The Georgian government had Georgian refugees from Tskhinvali in the lobby of Hotel “Iveria” to display signs in English protesting Ossetian actions. The cable notes that like Georgian government, the opposition regards Ossetians as “tools of the KGB”. Similar to Gamsakhurdia, the National Congress thinks that Ossetians should be given cultural, but not political autonomy.

Gamsakhurdia told Poloff that Georgia successfully resists attempts of economic pressure by threatening to block railway and ports. Gamsakhurdia said that he could not trust Yeltsin, leader of RSFSR, “because one day he says one thing and the next day he says the opposite”. The protocol signed on March 23 between Gamakhurdia and Yeltsin stipulated Georgian – RSFSR cooperation in solving Ossetian conflict without Center’s supervision. According to Gamsakhurdia, Yeltsin renounced this agreement to save his political future. The document notes that Gamsakhurdia called Yeltsin “drunkard and obviously untrustworthy”; however, few weeks ago Gamsakhurdia believed that Yeltsin was the Soviet Union’s only hope. Gamsakhurdia also criticized people’s deputy Galina Starovoytova for supporting South Ossetians.