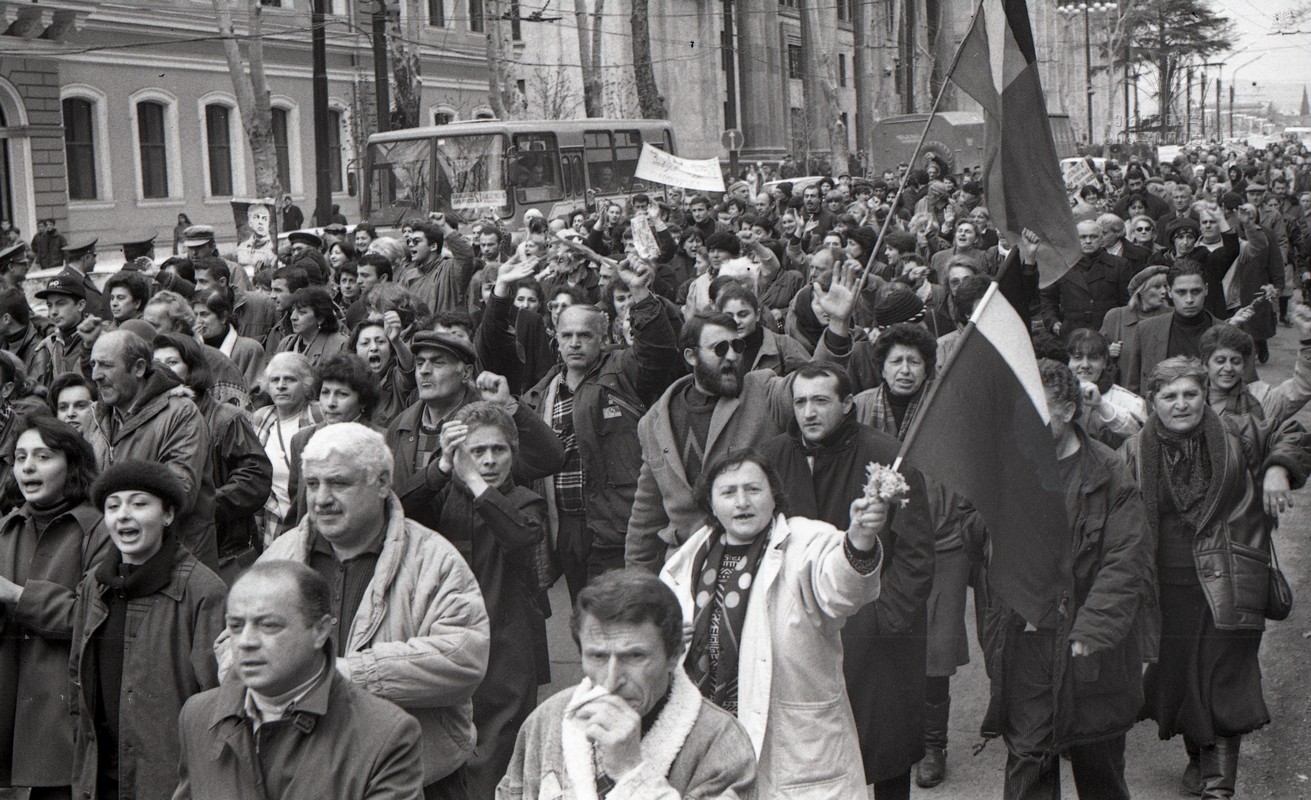 During 31 March – 3 April 1991, US Embassy representative Poloff visited Georgia. Following the visit, three reports were prepared. We have already published the report from April 10, 1991 sent from US Embassy in Moscow to US Department of State called: Gamsakhurdia continues to challenge Moscow.

This time IDFI published second report prepared after Poloff’s visit, which is available at the WIKILEAKS Public Library of US Diplomacy [1]. The document describes political situation in Georgia at the beginning of 1991.

According to the cable, “Georgian politics remain true to their Byzantine heritage and appear somewhat bizarre to most outsiders”. The characteristic features of Georgian politics are high emotionality, where logic frequently is substituted by drama and elevated rhetoric. Poloff has regularly visited Georgia in last two years, and occasionally in last ten years, but never stopped to be fascinated by Georgian politics.

Because of his criticism, Gamsakhurdia referred to Radio Liberty and the Wall Street journal as “instruments of Kremlin” and was stunned when Poloff explained to him that this was not indication of collaboration with Kremlin. Moreover, Gamsakhurdia accused his opponents from National Congress to conspire with Iraq during the Gulf War and having several illegitimate children. The opposition copies the same blaming style. The leader of National Democratic Party Gia Chanturia accused Gamsakhurdia of collaborating with KGB against Georgian people. Chanturia, and his wife Sarishvili, showed Poloff the documents proving that during his imprisonment, Gamsakhurida was put in psychiatric hospital. When Poloff inquired about the origins of the document, they answered that fromer KGB members gave them this document last year in France.

The document notices that precision and statistics is not the Georgian’s strong side. Gamsakhurdia estimated the personal of Georgian Ministry of Internal Affairs as 10,000, and the same day, changed it to 20,000. During three meetings with leaders of the National Congress, the estimate of membership varied by several thousand.

The cable remarks that most likely Gamsakhurdia will win upcoming presidential election on May 26. Despite authoritarian tendencies, he enjoys wide popular support. During meeting with Poloff, Gamsakhurdia continued to defend his decisions about suppressing freedom of speech and assembly. He claimed it was “necessary measures to counter Center’s “provocation”. On Poloff’s question why he has closed down critical newspaper “Molodezh Gruzii”, he answered that there is a paper shortage in Georgia, and some newspapers have to be shut down. Gamsakhurdia is prepared to tolerate criticism “but not slander”. In reality, Gia Chanturia tried to print a disapproving article about Gamsakhurdia, but the editor was prevented from publishing it. Gamsakhurdia also stated that members of the National Congress should not be allowed to freely express themselves because it “would provoke violence”.

The National Congress consists of six blocks, with average ten parties in each. The largest National Democratic Party and National Independence Party have 5000 and 2000 members respectively. In the matters of independence, the National Congress has more radical positions than Gamsakhurdia’s block, Round Table. The member of National Independence Party Davit Onanashvili told Poloff that his party demonstrates with demand from Georgian Supreme Soviet to bar the presence of Soviet troops in Georgia. Gia Chanturia told Poloff that for the National Congress it is more difficult to fight against the Round Table than Communists, because the Round Table is Georgian. Chanturia and others recognized that decrease in the National Congress’ support. Poloff also noticed that last two of National Congress’ rallies were less populous than previous ones. Chanturia told Poloff that during public speech Gamnsakhurdia threatened them with physical destruction, and prevented them from getting hard currency for travel in US. Sarishvili is afraid that she might be arrested for criticizing Gamsakhurdia. She called Gamsakhurdia “a cruel man”, and told how Gamsakhurdia accused her of allying with Iraq and having several illegitimate children in orphanages. The document comments that despite current strained relationship, Poloff remembers how several years ago Gamsakhurdia and Chanturia were praising each other.

According to estimates, there are around 25 paramilitary groups in Georgia. Half of them support the Round Table, the other half remains loyal to the National Congress. A western journalist told Poloff that three months ago, according to Soviet general in Georgia, Gamsakhurdia attempted to make a deal with the Soviet army. In exchange for disarming paramilitary groups, he assured them of collaboration in drafting Georgian men in the Soviet army.

Gamsakhirdia places main emphases on disbanding a paramilitary group loyal to the National Congress, “Mkhedrioni” or Horsemen. Mkhedrioni was created in 1989 with members of Round Table, and groups now belonging to the National Congress, to defend Georgians in conflict with Abkhazians and Azerbaijanis. The leader of Mkhedrioni, Ioseliani, and other 70 members, has been arrested and are awaiting trial. The supporters of Ioseliani did not hide the fact that in the past he served four prison sentences for armed robbery and until the last arrest was not a political prisoner. Sarishvili told Poloff that they “acknowledge that he has been a criminal so it is not a problem. He does not hide it. Gamsakhurdia unjustly arrested him on charges of illegally possessing weapons. Of course, he had those weapons, but if you use that criteria you could imprison everyone who lives in Georgia”. Interestingly, official from Georgian Ministry of Foreign Affairs, Levan Gogoberidze defended Ioseliani’s personality by saying that he is clever, because he managed to get into the Moscow State University with only seven grade education. He also told Poloff that many Georgians regard Ioseliani as an intellectual.

[1] The WIKILEAKS Public Library of US Diplomacy is the largest online collection of US open and secret diplomatic communications. As of 2013, it holds more than 2 million publications.

Other Publications on This Issue
Congressional Delegation in Georgia: Meeting with President Gamsakhurdia’s Opposition  |   18 May 2017
CIA Documents  |   11 May 2017
Gamsakhurdia Continues to Challenge Moscow  |   31 March 2017