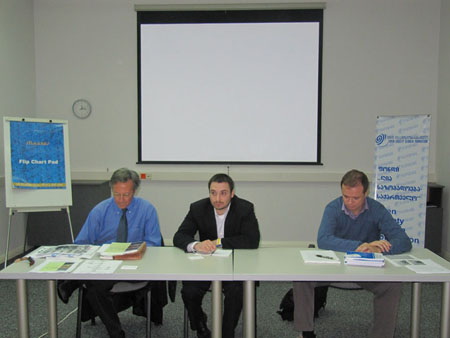 It remains unclear which specific actions of Jennifer Gaspar have endangered security of Russian Federation. The sphere of her activities includes law, accounting and audit, also consulting on issues of enterprise management. Namely, she is an expert of organizational management and development, assisted Hermitage Museum Foundation.

In January 2014, upon inspection by Prosecutor’s Office, “Freedom of Information Foundation” was requested to be registered at the Ministry of Justice as a “foreign agent”. The Prosecutor’s Office decided that the Foundation conducts activities “with political character” which is “directed towards building public opinion concerning inefficiency of exercising the powers given to state authorities and the policies pursued by existing government”. According to blog of Ivan Pavlov, the following activities have been considered by the Prosecutor’s Office as directed towards building of public opinion, and thus, political work: participation of Ivan Pavlov in a meeting with Barack Obama in September 2013, within the framework of G20 summit, preparing analysis of changes to personal data protection legislation, organizing “Award and Anti-award of Right to Know”, participation of program director of the Foundation in OGP London Summit and publication of results of monitoring of official state web-sites. Besides, Pavlov has been opposing the Federal Security Service as an advocate and human rights defender a number of times. At the moment Pavlov is defending the rights of a historian Mikhail Suprun, who has been convicted for violating “personal and family privacy” as a result of research on repressed Germans. The appeal of the historian is being considered by the European Court of Human Rights.

Ivan Pavlov is going to file an appeal on the decision of the Federal Migration Service to deport his spouse.

Founded in 2004, the “Freedom of Information Foundation” is one of the first partner organizations of IDFI. The Foundation has lent great assistance to IDFI at the very beginning of its activities. Importantly, methodology of the monitoring, considered by Russian Prosecutor’s Office as an example of political work, has been used by IDFI in one of its first studies. In 2010 Ivan Pavlov visited Georgia and participated in training on the practice of access to information organized by IDFI. Currently IDFI cooperates with the Foundation in the international study of electronic openness of the government, covering Georgia, Belarus, Russia and the USA.

IDFI expresses support to the family of Ivan Pavlov and the Russian “Freedom of Information Foundation”. We hope that the organization will continue promoting transparency of information and government accountability in Russia without any hindrances.