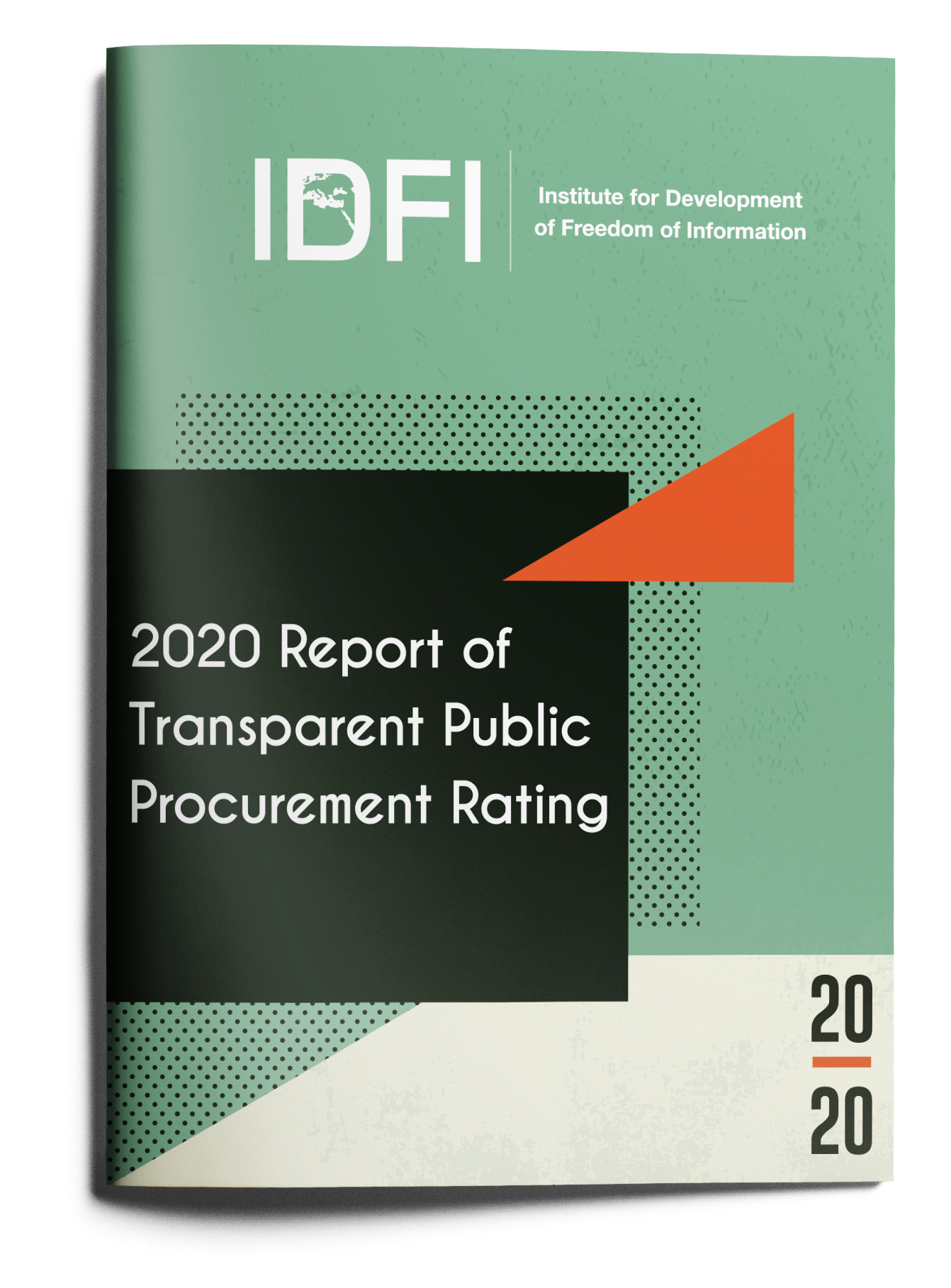 The aim of the Transparent Public Procurement Report 2020 is to present the evaluations of Public Procurement Legislations of member countries of TPPR Network, ascertain the main statistical trends, highlight the weakest and strongest performing areas of public procurement, and name the best and the worst performing countries in regards to the transparency and accountability of their respective public procurement systems.

The report is based on the evaluation of 40 countries worldwide, spread across Europe, Asia, Africa, Oceania and Americas. Specific country evaluations were prepared in close cooperation with TPPR network members (local CSOs or experts). After the finalization of the individual evaluations, they were published on the website www.tpp-rating.org and included in the overall rating.

The TPPR Methodology is envisioned to be a universal methodology for assessing public procurement legislations (PPLs) with the ultimate goal of identifying the strengths and weaknesses of relevant legal frameworks. The Methodology is composed of 64 indicators. Each indicator included in the TPPR Methodology is granted equal weight and receives a maximum of 1 point. With a total of 64 indicators, public procurement legislations are rated on a scale of 0 to 64 (converted to percentages for easier understanding and visualization).

The indicators are separated into 5 groups (benchmark indicators) that represent the key characteristics (values) of a well-functioning, transparent and accountable public procurement system: Uniformity of the Legislative Framework, Efficiency, Transparency, Accountability and Integrity, Competitiveness and Impartiality. The methodology also includes 5 indicators that are used to assess legal components that are not directly part of the public procurement legislation but are crucial in terms of creating a transparent environment necessary for the proper functioning of any public procurement system. These indicators are grouped separately under the ‘Transparency Environment’.

Public procurement systems vary significantly by country. The TPPR Methodology is intended to be applicable on a global scale, meaning that the indicators cannot be too specific and cannot cover all the possible variations and exceptions. It also needs to be taken into consideration that the report includes evaluations of TPPR participant countries based on applicable public procurement legislation. The scope to which the legislation and relevant regulations are implemented in practice is outside the scope of the methodology.

- Public Procurement Legislation of nearly all evaluated countries lay out the basic principles and general framework of the procurement process, makes it operational and indicates how the law must be applied to specific circumstances;

- In most of the cases, public procurement legislation is accessible in a single governmental website, however, access to these documents in an electronic machine-readable format still constitutes a challenge in many participant countries;

- Public procurement legislation in all evaluated countries apply to all state budget entities and local government entities, however, the approach varies when it comes to applying the legislation to Legal Entities of Public Law (LEPL), state-owned companies and state non-commercial legal entities;

- The scope of coverage of public procurement legislation in various countries includes all sectors of the economy where competition is possible and exemptions are clearly listed in the legislation;

- In all cases there is a single or several state bodies responsible for managing public procurement, however, in most of the cases these bodies are not entitled to have own income in addition to state funding;

- In many cases electronic means still do not constitute the primary method of conducting public procurement;

- In a number of cases legislation sets preferences for domestic suppliers;

- In all participants countries, the legislation ensures the right to review in the procurement process for tender participants, however, problems are evident in regards to applying the right to potential suppliers as well as to the general public;

- In most of the cases, there is an independent review body in the country with the authority to review complaints and grant remedies, however, civil society members are usually excluded from its composition.

Findings by the Stages of Public Procurement Process

- Most of the TPPR participant countries demonstrated a lack of transparency at the post-tendering stage of public procurement compared to the earlier stages of pre-tendering and tendering;

- Countries usually publish information on tender notices, however, access to the information in a machine-readable format is highly limited;

- In cases when evaluation criteria include both price and quality, the winner is rarely chosen

- Public procurement annual plans are still not published by many TPPR participant countries.

Findings by the Benchmark Indicators

- Among the six benchmark indicators, Transparency proved to be the most problematic direction of public procurement regulations among the countries covered by TPPR. This is largely explained by the fact that states still face significant problems in the direction of publishing post-tendering information. As for the pre-tendering and tendering phases, information is rarely published in electronic machine-readable format;

- Lower scores in the benchmark indicator of Transparency were one of the major factors negatively affecting the overall evaluations of the countries;

- The least problematic benchmark indicator was the Uniformity of the Legislative Framework since most of the TPPR participant countries have adopted the legislation directed at regulating public procurement, which includes the main principles of conducting state purchases and the legislation is applicable to a wide range of actors determined by the legislation;

- Competitiveness and Impartiality proved to be another well-performing benchmark indicator, which can be explained by the fact that most of the legislations in TPPR participant countries avoid including in itself regulations that would threaten competitiveness and impartiality. However, the picture of implementing these regulations inpractice could be significantly different.

- During the last years, important positive changes have been introduced in the area of public procurement in Moldova. Thus, the country improved its position in the rating and moved from the 12th to the second position;

- Even though a number of positive developments have been seen in Georgia as well, the progress was not as significant as in the case of Ukraine and Moldova, thus Georgia holds the third position in the rating of 2019-2020;

- TPPR participant countries reaching the benchmark of 80% in the evaluation of 2019-2020 are Ukraine, Moldova, Georgia, Philippines and Romania.

- Some of the poorest performing countries in the TPPR evaluation of 2019-2020 are Tajikistan, Papua New Guinea, Burundi, Venezuela, Malawi, Azerbaijan, El Salvador and Zimbabwe. The overall evaluations of the given countries in the rating are below 60%.

- It should be noted that Armenia is not included in the list of countries with poor TPPR performance in the rating of 2019-2020. From the bottom of the rating in 2016-2018 Armenia moved to the middle of the rating. The reason for the latter is the reform executed in the public procurement system of Armenia, thus the evaluation of the country increased accordingly.

- Since the benchmark indicator of Transparency Environment includes 5 questions/indicators only, over ten countries showed 100% performance in the area. These countries include European countries as well as the Philippines, Costa Rica, Bolivia, Tanzania, Kenya, Uganda and El Salvador;

- The countries showing relatively poor performance in this direction in the evaluation of2019-2020 are Togo, Azerbaijan and Belarus.

- Based on the TPPR evaluation in 2019-2020 up to 10 countries reached the benchmark of 90% in the area of Uniformity of Legislative Framework. The list of well-performing countries is led by Ukraine and Georgia;

- It should be noted that in the rating of 2016-2018, Ukraine was not a leading country, however, the reforms implemented in the country led to a significant improvement in the ranking of Ukraine in the basic indicator of unity of the legislative framework and it moved to the first place in the assessment of 2019-2020;

- Some of the weak performing countries in the benchmark indicator in both periods wereGuatemala, Burundi, Cota Rica and the Czech Republic.

- The leading countries in the benchmark indicator of Efficiency in 2019-2020 were Ukraine and Romania with a 100% rating. Moldova and Lithuania also scored high in the area;

- In the evaluation of 2016-2018 together with Romania and Lithuania, Albania, Paraguay and Philippines were leading the list, however, they moved down the rating which was caused by the advancement in the area of other TPPR participant countries.

- Ukraine leads the TPPR rating in the benchmark indicator of Transparency in the evaluation covering the periods of 2016-2018 as well as 2019-2020. Georgia is holding one of the leading positions in both of the evaluations as well;

- Due to the advancement of these countries in the benchmark indicator of Transparency, Costa Rica moved from the second position in 2016-2018 to the fourth position in 2019-2020;

- The countries performing poorly in the benchmark indicator both in 2016-2018 as well as 2019-2020 are Papua New Guinea, Malawi, Burundi, Tajikistan and Azerbaijan.

- During 2019-2020 the TPPR participant countries reaching the benchmark of 90% in the areaof Accountability and Integrity were the Philippines, Ivory Coast, Romania and Togo;

- Some of the poorest performing countries in the benchmark indicator of Accountability and Transparency are Belarus, Papua New Guinea, Armenia and Uganda.

- Over 10 participant countries of TPPR reached the score of 90% in the benchmark indicator of Competitiveness and Impartiality, Ukraine and Georgia lead the list with 100% evaluation, followed by Albania, Philippines, Mexico and Armenia;

- In the evolution of 2016-2018, Paraguay and Hungary were also included among the leading countries in the benchmark indicator;

- Some of the weak performing countries in regards to Competitiveness and Impartiality are Papua New Guinea, Ecuador, Azerbaijan, El Salvador and Burundi.


The recommendations below dwell from the most important main findings determined in the process of conducting TPPR evaluations of 40 participant countries. Specific recommendations tailored to individual countries can be found in the Country Evaluations part of English and Russian versions of the report.

- Countries should ensure that their respective public procurement legislations are accessiblein a single governmental website in electronic machine-readable format;

- Countries should strive to have a single state body responsible for managing public procurement, and should grant these bodies the right to have their income in addition to state funding;

- They should also avoid setting preferences for domestic suppliers;

- The right to review in the procurement process should be ensured for tender participants, as well as potential suppliers and the general public;

- Countries should ensure the existence of independent review bodies with the authority to review complaints and grant remedies. The bodies should be composed of the state as well as civil society representatives.

Recommendations by the Stages of Public Procurement Process

- Countries should take actions aimed at increasing the level of transparency at the post-tendering stage. This can be achieved, inter alia, by publishing information on sub-contractors, contract amendments as well as contract performance and quality reports;

- Even though most of the TPPR participant countries publish information on tender notices, access to the information should be guaranteed in machine-readable format;

- In cases when evaluation criteria include both price and quality, the winner should be chosen using a cost-effectiveness approach consisting of three factors: life-cycle cost, bestprice-quality ration, environmental and/or social costs;

- Access to submitted complaints and dispute resolution should be guaranteed in machine-readable electronic format;

- Procuring entities in member states should have a legal obligation to publish public procurement annual plans.

- States should strive to implement reforms and amendments to improve their performance in the benchmark indicator of Transparency. This can among the other things be achieved by improving the transparency standards at the post-tendering phase and ensuring that various information on pre-tendering and tendering phases that is already being published is accessible in electronic and machine-readable format;

- Even though most of the legislations in TPPR participant countries avoid including in itself regulations that would threaten competitiveness and impartiality, it also crucial to ensure relevant implementation of these provisions in practice.

Full version of the Report is available in English and Russian languages.