The Georgian government approved the second Open Government Partnership Action Plan (OGP) on its September 5th session. 16 state bodies have undertaken 27 commitments to be fulfilled in 2012-2015. The Institute for Development of Freedom of Information (IDFI) has been actively engaged in the development process of the plan.

Commitments to be fulfilled in 2014

According to the action plan, part of the commitments should be fulfilled in 2014. Works have already been launched on some of them and are expected to be finished by the end of the year. For instance, financial reports of political parties and donation will be published in a processable format (Excel diagram). So far only the scanned version of the findings was published, and the process of its processing was inconvenient and time-consuming.

The reform of staffing rule for civil servants will also be accomplished, which is supposed to help developing of objective and reliable system.

Within the frame of the OGP action plan, by September 20th the Supreme Court must publish on its website the quarterly statistics of secret wiretapping, while in December the annual data will become publicly available, which has been requested by NGOs for a long time.

The House of Justice will have a new service – “voice of the customer”, which will be a mechanism for citizen feedback.

Work on uniting regulatory norms of information availability in a single legislative act has already been launched. The new law is meant to eradicate problems that arise during the process of receiving public information. The act is scheduled to be prepared until December.

According to the plan, reception of insurance policies at the House of Justice must also be available until the end of this year. The public libraries must be equipped with the Internet, computer devices, and adopt the function of a public center.

Until December 2014, the Ministry of Internal Affairs (MIA) must adapt its website for persons with disabilities, and add the application of online consultation.

The public entity of public law-112, LEPL of the same ministry, has to implement alternative and innovative channels of communication. Apart from phone calls, citizens will be able to contact the Integrated Emergency Situations Center via SMS, GPS trackers, or video calls. The latter will be of special importance for disabled persons with hearing and speech issues.

Commitments to be fulfilled in 2015

Within the frame of OGP action plan, the development of the citizen portal (WWW.MY.GOV.GE) is scheduled to be accomplished until 2015. The portal integrates up to 70 state services and up to 80 communal fees. Via this portal, citizens will be able to electronically submit a letter to the agency as well as receive a response.

Another resource set for implementation is Open data portal (DATA.GOV.GE), which means that open data from state agencies will be published in processable, calculable, and other formats available for everyone. Starting from the next year, it will be possible to electronically submit petitions to the government via Ichange.ge. In case of necessary number of electronic signatures, the proposals will be discussed at a government’s session.

According to the plan, a monitoring mechanism of public official’s asset declaration will be created in 2015 in order to verify accuracy of the assets entered by the officials in declarations.

A criminal offence map will be developed, and reception of statistical information will be available in various formats and with different variables, including time, type of crime, region, and other parameters.

Starting from 2015, local self-governments will be integrated into the unified electronic system, and regional Community Centers will be improved, enabling the local population to receive up to 200 services without leaving their villages. A digital stamp and online authentication system will be developed, enabling citizens to make important signatures from their homes.

The plan further provides for development of an automatic system of human resource management at public services, unified database of the staff employed in the county’s public sector, e-HMRS.

In order to make longer storage of documents possible, development of electronic archive is planned 2015, while the archive of the Ministry of Internal Affairs is supposed to ensure creation of the electronic catalogue of documents stored in the former state security archive and its publication in compliance with rules determined by the law.

Fulfillment of the commitments taken within the frames of the action plan provides for free access to the electronic versions of documents stored in the national archive, enabling researchers to work with the given archival documents without restrictions.

According to the undertaken commitments, in 2015 the Ministry of Finance must ensure informing the society regarding the budgetary processes and the Central Election Commission (CEC) must carry out a campaign aimed at the enhancement of citizen awareness with respect to election processes. 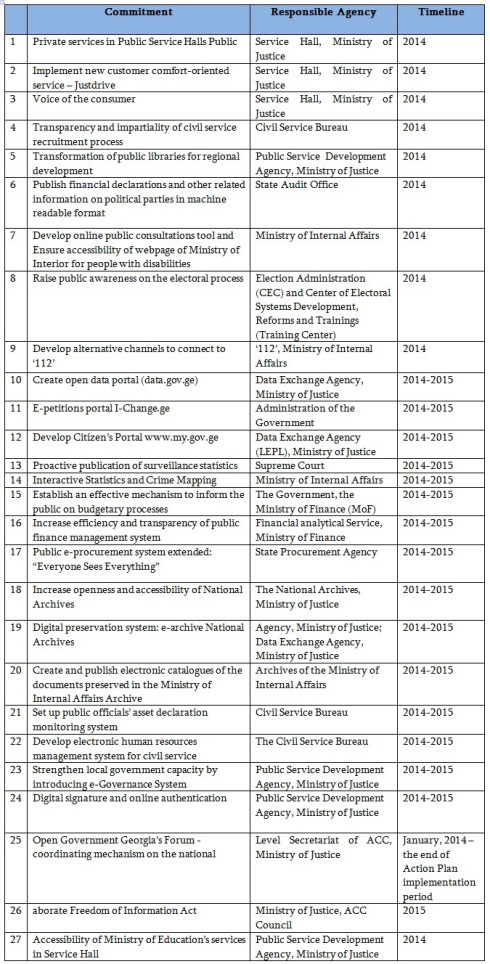