Statistics on Animal Cruelty in Georgia

Georgia recently saw a number of videos depicting violent treatment of animals spread through social networks and the media. These videos have left the public wondering about whether perpetrators have been held responsible.

According to Georgian legislation, cruelty against animals that that has caused the death or maiming of the animal, as well as torture animals shall be punished by a fine or corrective labor for up to a year; the same act perpetrated by a group, repeatedly, or at the presence of a minor shall be punished by imprisonment for up to two years (Article 259 of the Criminal Code and Article 104 of the Code of Administrative Offences).

IDFI referred to the Ministry of Internal Affairs and the Supreme Court of Georgia in order to receive information on the number of investigations launched on the cases of animal cruelty and number of natural persons held criminally responsible for the offences.

Information provided by the Ministry of Internal Affairs reveals that the highest number of investigations on the cases of animal cruelty were launched in 2015 and 2016, 21 and 15, respectively. In 2006-2011, only a few cases were being launched each year. The cases include administrative violations as well as crimes punishable by criminal law. 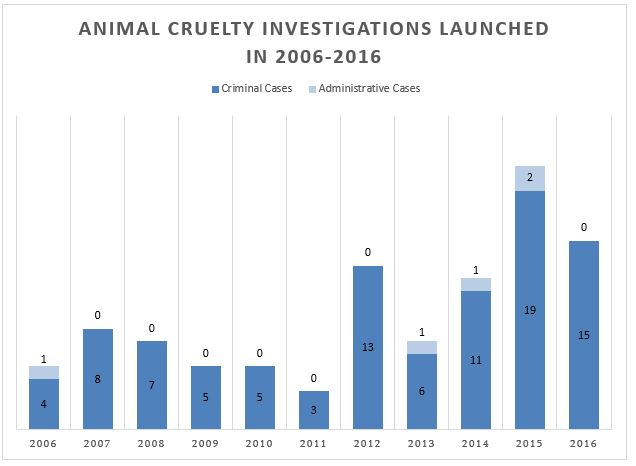 With the aim of receiving information on the number of cases brought before regional and city courts and number of natural persons held responsible for the crimes of animal cruelty IDFI referred to the Supreme Court of Georgia.  It turns out that the Supreme Court does not keep separate statistics on administrative penalties imposed on cases of animal cruelty. As for criminal cases, in the period of ten years from 2006 to 2016, courts throughout Georgia have considered a total of 5 criminal cases related to animal cruelty. In three of these cases, the only reason why the court imposed a penalty harsher than a fine was the fact that the charges included offenses in addition to animal cruelty (murder, stealing and coercion). 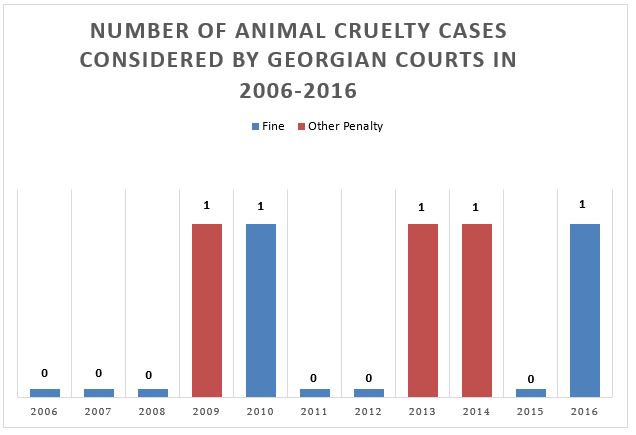 Standards of animal protection on the global level are assessed by World Animal Protection Index. According to the rating UK constitutes one of the countries with the highest protection index. Rating is based on criteria such as legislation and its effectiveness, activities of law enforcement institutions, declaration of animal protection importance on the international level and etc. 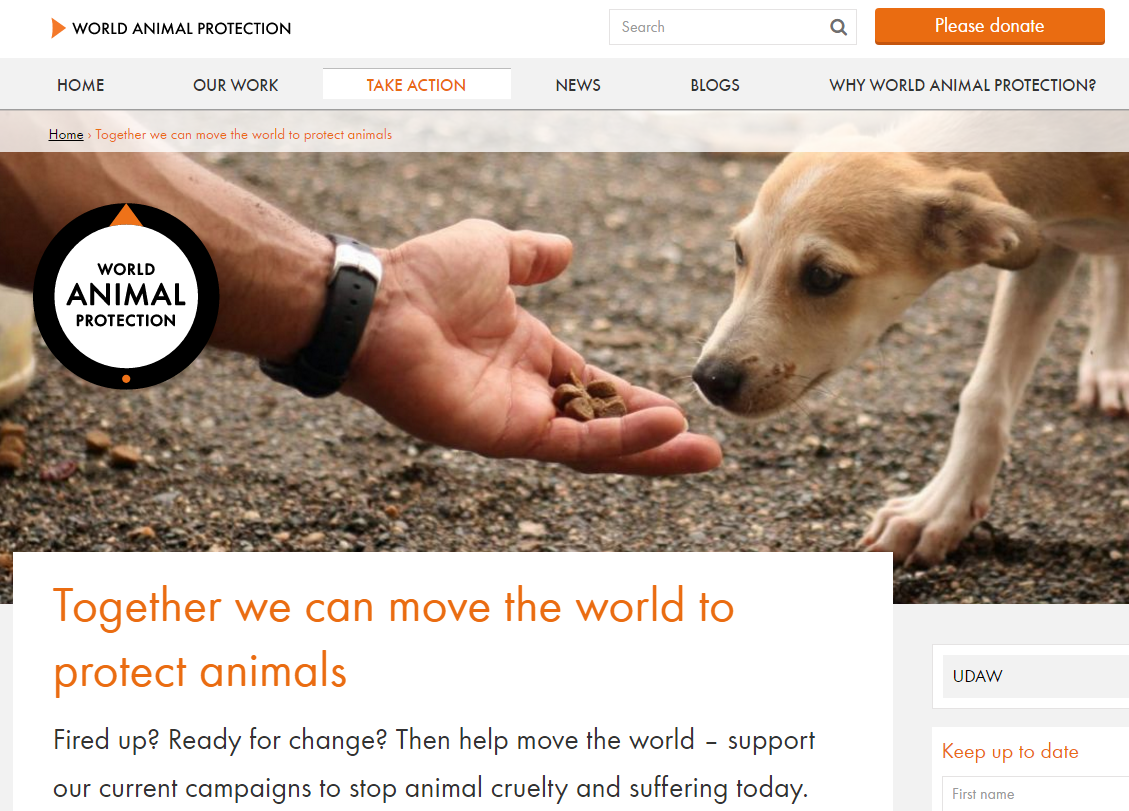 Based on official statistical information, Royal Society for the Prevention of Cruelty to Animals  receives ca. 150 000 reports of animal cruelty annually, out of which  ca. 1500 cases are referred to the prosecution and sent to the courts for further consideration. Conviction rate of the cases heard by the courts is 92%. 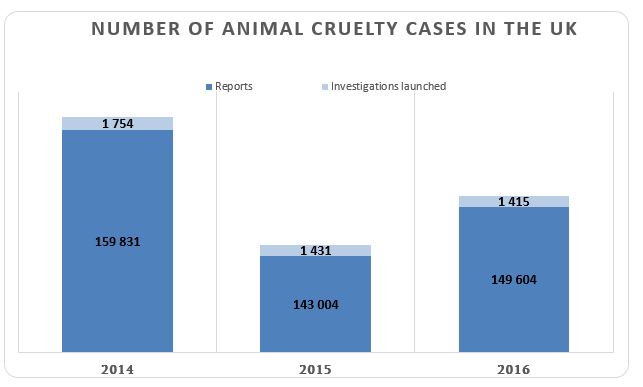 Unfortunately, Georgia is not being evaluated by any of the global indices on animal protection. Even though information disclosed by the Ministry of Internal Affairs and the Supreme Court seems to suggest low prevalence of animal cruelty in Georgia, we believe that this data fails to reflect reality of animal protection in the country. The low number of official animal cruelty cases in Georgia is most likely due to lack of citizen reports, which itself is due to lack of public awareness about animal rights.

It is highly problematic when public instructions do not disclose information on animal cruelty based on the justification that they do not hold information in the form requested. The fact that perpetrators are charged with a sentence harsher than fine only in the cases of cumulative crimes is another matter of concern.

In order to improve animal protection in Georgia the government must show willingness to ensure the protection of animals in Georgia, and work towards raising public awareness on this issue. All relevant public institutions (the Ministry of Internal Affairs, the Chief Prosecutor’s Office, the Supreme Court) must start keeping separate statistics on cases of animal cruelty and disclose this information upon request. The Government of Georgia should declare its readiness to protect animals on international level and join the European Convention for the Protection of Pet Animals.

The Importance of Personal Data Protection in the E-Governance Process