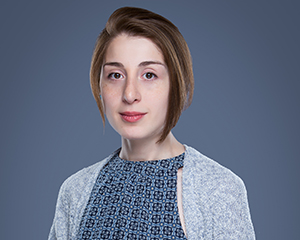 Nino has joined the Institute for Development of Freedom of Information in June 2014. She is employed as a legal specialist, under the auspices of the project Public Information Database (www.opendata.ge).

Nino has graduated from the faculty of law at Tbilisi State University (was awarded with the scholarship of the President), after which she did an internship at the Ministry of Justice of Georgia.  This was followed by the employment period at Transparency International Georgia. After the 2.5 years of working as a lawyer and a court monitoring coordinator at TI Georgia she left the organization for studying purposes and went in the Kingdom of Netherlands to take the MA course in international Relations, specialization of European Union Studies (she was awarded the LExS Platinum Scholarship).

In addition Nino has participated in number of international training courses and student conferences. She also took part in different moot courts. Nino is fluent in English, has good level of Russian and basics of German language.

Comments on 2020 Voluntary National Review of SDG Implementation in Georgia

Victims of Soviet Repressions in Georgia – Legal Remedies and Their Assessment