Following the constitutional amendments and changes to the organic law of Georgia on common courts, the minimum number of judges at the Supreme Court increased to 28. At the same time, 10-year appointments were changed to lifetime tenures, and the High Council of Justice was given the authority to nominate candidates for parliamentary appointment.[1] Following these changes, the High Council of Justice started the selection of Supreme Court judge candidates and in the beginning of September 2019 provided a list of 20 candidates to be submitted to the Parliament of Georgia for approval.[2] Interviews with candidates were live streamed and the process enjoyed wide media coverage.

The selection process was generally critically received, despite positive assessments of the live-streaming of interviews. The OSCE/ODIHR assessed the Supreme Court judge candidate selection process as “lacking transparency and accountability despite some positive measures to build public trust in the judiciary”.[3] The Coalition for an Independent and Transparency Judiciary was also critical of the process as well as the regulatory framework, which “allowed the formation of a list of candidates suiting the interests of the dominant group of judges and the ruling party”.[4]

What does the public in Georgia know about the process and what is their attitude towards the selection of Supreme Court candidates and judicial institutions? A phone survey conducted on September 5-11, 2019 suggests that people in Georgia are divided in their trust towards judicial institutions, are not knowledgeable about the process, have little trust in it, and largely have not heard of the selected candidates.

Generally, thepublic is divided in whether they trust the High Council of Justice, Supreme Court, and the court system in general. About half of the public trusts and distrusts each of these institutions. 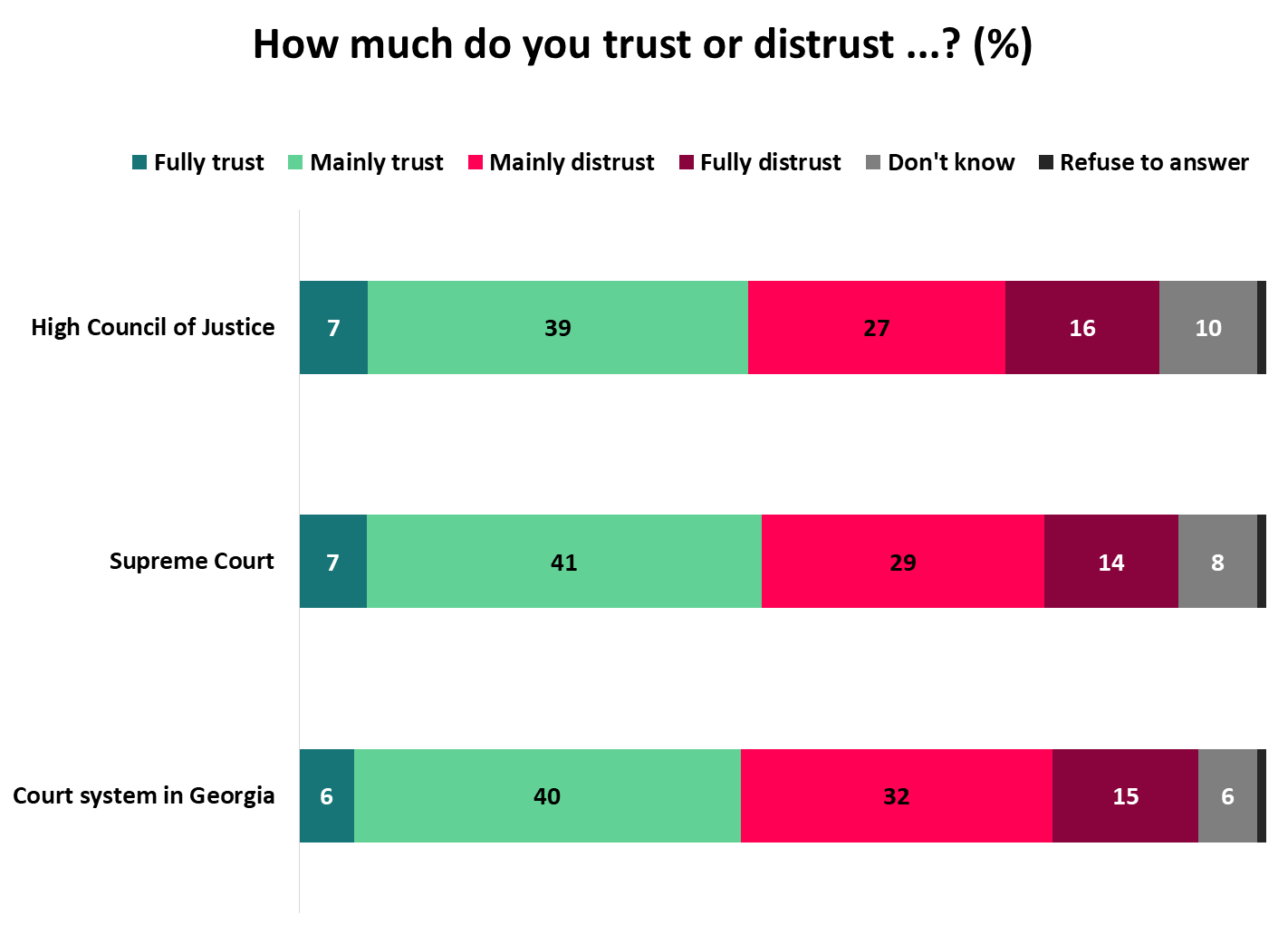 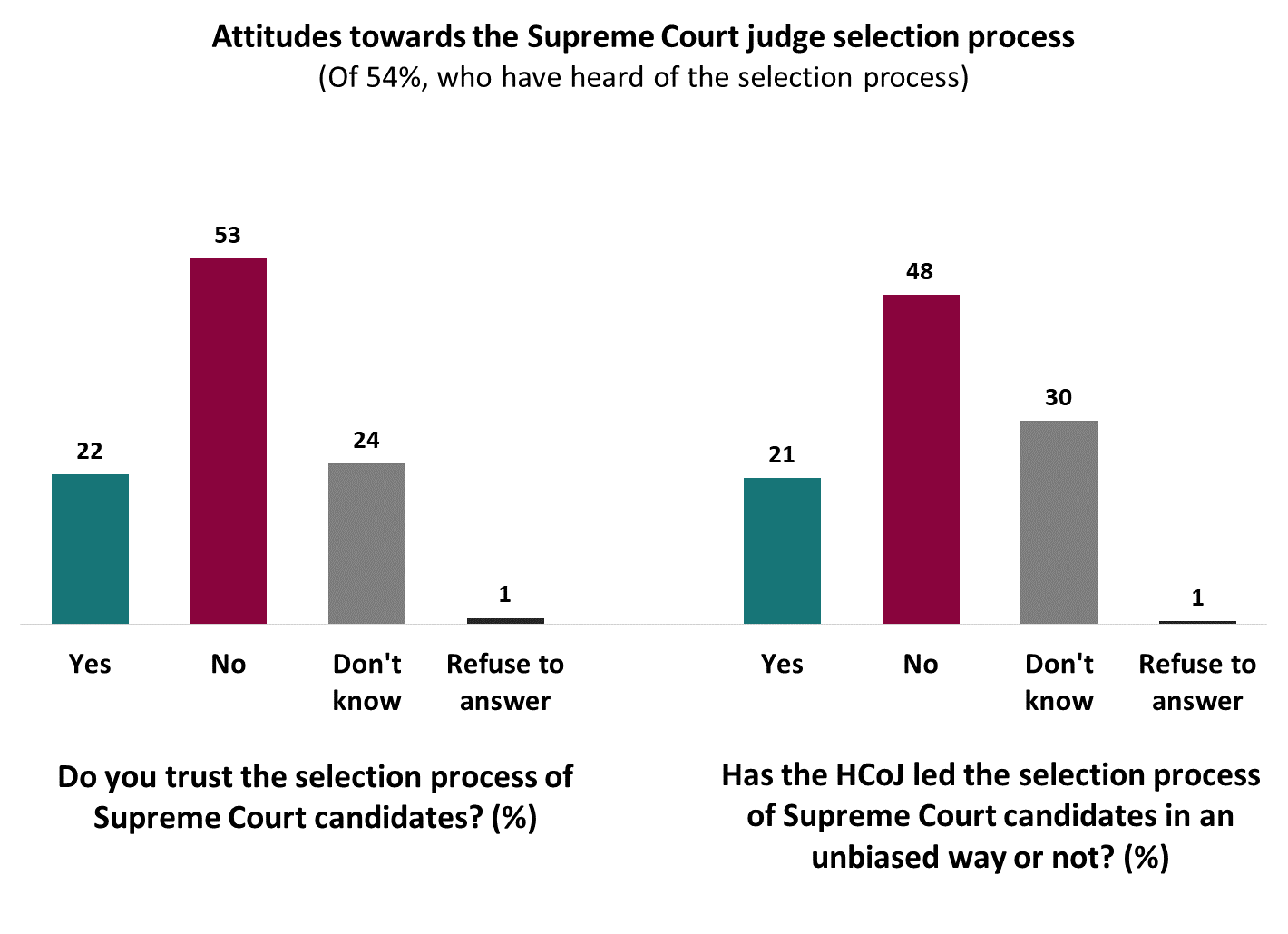 About one fifth of the adult Georgian-speaking population (19%) says appointment of these 20 candidates will improve justice in the country. The same share (19%) says the state of justice will get worse. About a third (29%) believe it will stay the same.

Considering the knowledge of the population about the selection process and their attitude to it, it may not be surprising that only 1% of the Georgian-speaking adult population considered it one of the most important events of the summer. [Note: Respondents were not prompted of the events. There was a pre-compiled list for phone operators to mark answers quickly. Several options were added to the list of events after the pilot.][5] The top five events named during the survey were:

- The devaluation of Georgian Lari,

- Dissolution of the June 20 rally;

- Further moving the administrative boundary line in the Samachablo region;

- The protest rallies “It’s a shame” and;

More than a quarter of people responded “Don’t know” to the question or refused to answer altogether. There were non-relevant answers as well, such as “good weather” and “lack of water and electricity”, etc. 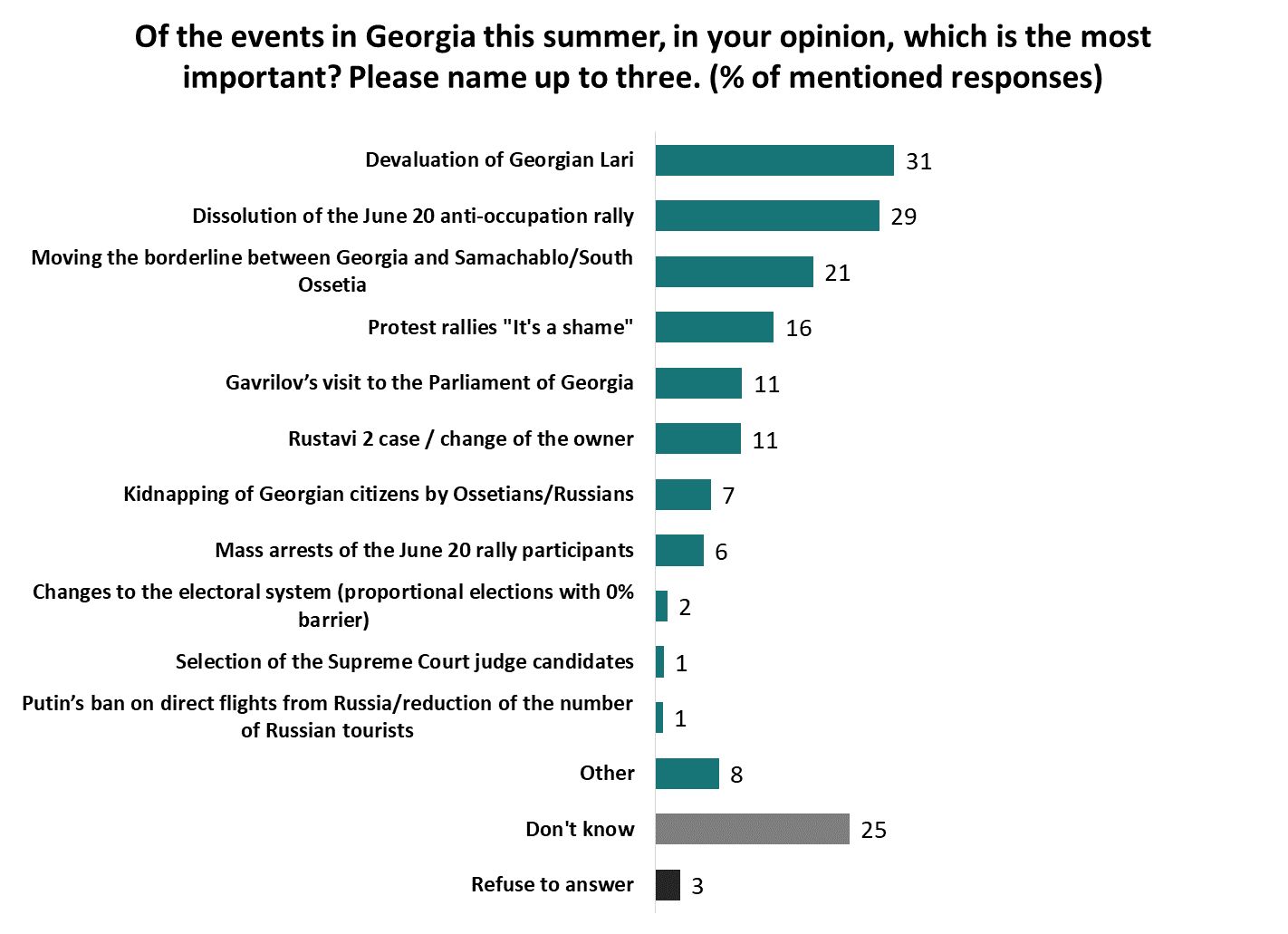 Overall, the public is divided in their trust towards judicial institutions. More than half of the population has heard of the Supreme Court judge selection process, though few find it to be among the most important events over the summer. Among those that are aware of the selection process, attitudes are more negative than positive. A majority of people in Georgia have never heard about the candidates.

On September 5-11, 2019, within the EU-funded project Facilitating Implementation of Reforms in the Judiciary (FAIR), CRRC-Georgia conducted a phone survey to find out people’s knowledge and attitude about the Supreme Court judge selection process. The survey resulted in 867 completed interviews, and is representative of the adult Georgian-speaking population of the country. The average margin of error of the survey is 2.2%.

[1] Constitutional amendments were adopted in 2017 and entered into force on December 16th, 2018. Changes to the organic law of Georgia on common courts was adopted on May 1st, 2019 https://www.osce.org/odihr/429488?download=true

[2] The selection process included interviews with 49 candidates, which were live streamed

[5] Respondents were not prompted of the events. There was a pre-compiled list for phone operators to mark answers quickly. Several options were added to the list of events after the pilot.