Proactive disclosure of public information was one of the most important commitments taken by Georgia within the framework of the Open Government Partnership (OGP). After active consultations, meetings and negotiations with civil society, as well as active support of the Institute for Development of Freedom of Information (IDFI) and other NGOs, the Government of Georgia adopted the Decree #219 on 26 August 2013 on the Electronic Request and Proactive Disclosure of Public Information. The decree entered into force on September 1, 2013 and obligated public institutions managed by the government to create public information websites and publish pieces of information listed in the annex until December 31, 2013.

In September 2014, one year following the introduction of the proactive publication standard, IDFI conducted a monitoring of the websites of public institutions with support from East-West Management Institute’s (EWMI) Advancing CSO Capacities and Engaging Society for Sustainability(ACCESS) project, funded by United States Agency for International Development (USAID). As of May 2019, IDFI has updated its monitoring results, which are presented below. 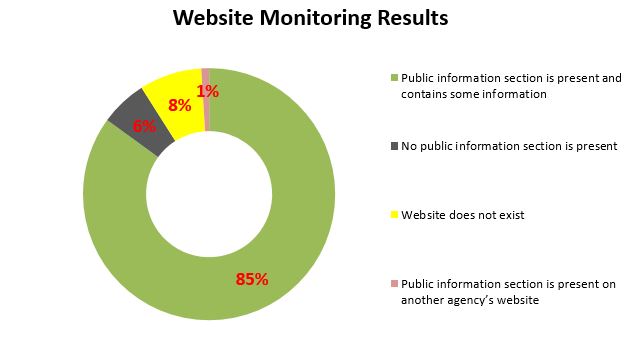 - In 2019, no public institution demonstrated a 100% compliance with the legal requirements of proactive publication of information.

- Among the central government institutions the highest (98%) compliance was demonstrated by the Ministry of Education, Science, Culture and Sport, while the lowest (39%) by the Administration of the Government.

- Nine of the 13 central public institutions have worsened their proactive disclosure rate since 2014.

- The average compliance rate of Legal Entities of Public Law and sub-agencies is 47%, compared to the 76% average of their parent ministries.

- Approximately 40% of ministry subordinate institutions had less than 30% of proactive information published on their website.

- Information on spending proved to be the least proactively published category of public information.

- Only 48 public institutions offered access to archived information that was proactively published in previous years.