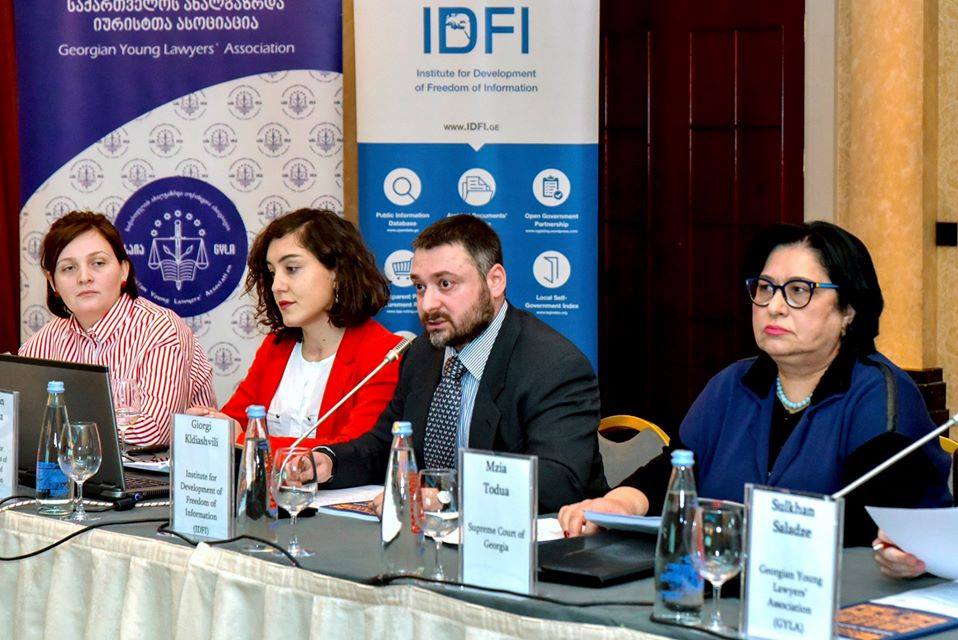 On January 23, Institute for Development of Freedom of Information (IDFI) and Georgian Young Lawyers’ Association (GYLA) presented the report “The Supreme Court of Georgia – Analysis of Institutional and Legal Framework”.

"The present study highlights those important legislative gaps that are essential to be addressed in a timely manner for ensuring the independence and efficiency of the judiciary. The aim of this study is to identify challenges and gaps related to the institutional and legal framework of the Supreme Court and to support further reforms of the Supreme Court by offering recommendations based on international standards." -mentioned Giorgi KLDIASHVILI.

- In the selection process of the Supreme Court judges the legislation in force does not provide relevant guarantees to ensure judicial appointment based on the merit principle;

- Three-stage secret ballot used in the selection process of the Supreme Court judges contradicts with international standards, as it excludes the possibility of taking reasoned decision (regarding the compliance of a candidate with the high status of a Supreme Court judge);

- The first stage of secret ballot does not enable the members of the High Council of Justice to make informed decisions, as on this stage, the members of the Council are only aware of the fact that judicial candidates comply with formal requirements for the vacancy and they make decisions based only on information provided in the applications of the candidates;

- Significant problematic issues were identified in the process of competition for the selection of the Supreme Court judges, such as the participation of members of the Council in the selection process, despite the existence of a conflict of interest, as well as the distribution of votes with the same scheme during the first secret ballot. This once again highlighted the gaps in the legislative framework and raised question marks in the society;

- The Rules of Procedure of the Parliament does not precisely define functional purpose of the working group and does not envisage external experts’ obligatory engagement in it. It does not define quota for the experts, Members of the Parliament and members of parliamentary opposition either;

- Procedure for the selection of the Chairperson of the Supreme Court is flawed as, in case two-third of votes is not reached on the first stage, the decision is made by the majority of the full composition of the Council. Therefore, on the second stage of voting, non-judicial members of the Council have no influence on the selection process and this does not allow for decision-making on the basis of consensus;

- The Chairperson has certain broad powers, and there is also an evidence of the duplication of functions with the High Council of Justice;

- The legislation grants excessive powers to the Supreme Court Plenum, including the right to file constitutional submission, and the right todetermine the amount of a monthly supplement to the official salary of a member of the Supreme Court; Moreover, competencies are duplicated between the Plenum and the High Council of Justice;

- According to the rule adopted by the High Council of Justice, the case is assigned to the Chairperson of the hearing (reporting judge). The rule does not envisage the procedure for selecting the other two members of the panel, which creates the risk of their arbitrary selection.

Taking into account international standards, the report includes specific recommendations in order to support further reform of the Supreme Court of Georgia.

The study was prepared within the framework of a project “Supporting the Reform of the Supreme Court of Georgia” funded by EWMI/PROLoG. The report was made possible by the generous support of the American People through the United States Agency for International Development (USAID). The contents of this report are the sole responsibility of “ TheInstitute for Development of Freedom of Information” (IDFI) and “Georgian Young Lawyers’ Association” (GYLA) and do not necessarily reflect the views of East-West Management Institute, USAID or the United States Government.

The Supreme Court of Georgia – Analysis of Institutional and Legal Framework

/public/upload/Magda/Presentation of the Report on Institutional and Legal Framework of the Supreme Court of Georgia/Supreme_Court_of_Georgia_ENG.pdf