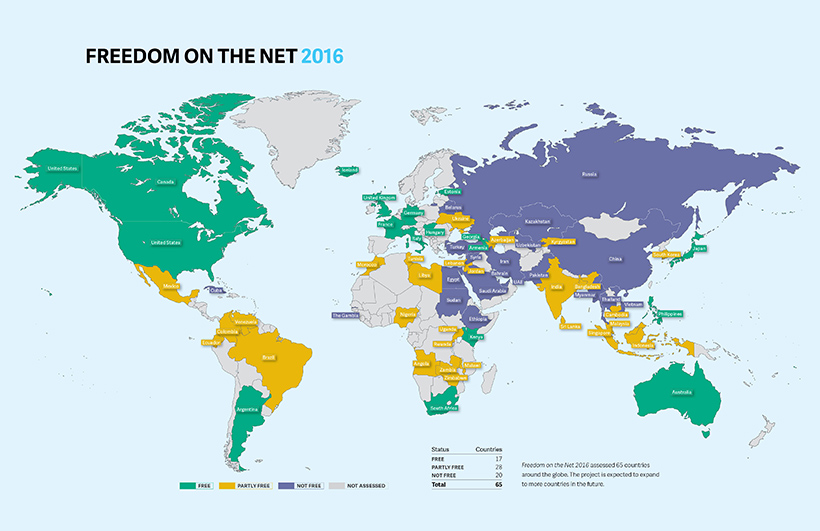 On November 14, 2016 Freedom House published an annual report on Internet freedom around the world. Georgia obtained a score of 25out of 100 and was assessed as “Free” in terms of Internet freedom. Nevertheless, the country’s score decreased by 1 point compared to 2015.

The report on Georgia positively assesses the ruling of the Constitutional Court of Georgia, which declared law enforcement agencies’ direct technical access to metadata unconstitutional. Among other key developments, the report covers the cases of blocking of international platforms, Wordpress and Youtube, which arguably negatively affected Georgia’s performance this year. In addition, the report mentions the one-month detention of an Internet user, Sulkhan Tsuladze, for his forum post describing a fictional attack on the US Ambassador to Georgia. As local human rights defenders argued, the detention was not justified.

In terms of obstacles to Internet access, the Freedom House report discussesthe issues of distribution of Internet users among several Internet service providers (ISPs), usage of social networks and importance of long-term state strategy for development of Internet infrastructure are discussed. More specifically, competition on Internet market is “minimal”, since two ISPs control more than two-thirds of the market (wired Internet market). Similarly, mobile Internet market is also dominated by two main providers. Inadequate infrastructure, low speed Internet and digital divide remain as hindrances. In order to overcome these challenges the government set up the non-commercial legal entity Open Net to build broadband infrastructure. The report mentions public concerns about lack of transparency and inclusiveness of the project.

The report refers to the issue of autonomy of the regulatory body of the telecommunication sector, the Georgian National Communications Commission. On a positive note, according to representatives of civil society organizations, the report argues that “the agency is gradually becoming more open to engagement with various civil society stakeholders.”

When it comes to online activism, the report mentions a growing impact of Internet use for disseminating information, mobilizing people for a common cause and waging online campaigns. As an example, the study mentions the campaign titled“Beka is not a criminal”, which was launched in support of Beka Tsikarishvili, who was detained for illegal possession of marijuana. Online platforms were extensively used for mobilization of like-minded people and accumulation of enough signatures for an online petition protesting against strict drug policy.

With regard to limits on content, it is mentioned that despite the latest incidents of government blocking international platforms, “censorship online remains rare” and “web content is not subject to systematic manipulation.” Nevertheless, self-censorship is argued to be present among civil servants. As far as online media content is concerned, according to the report, Georgian media landscape is becoming diverse, however, proliferation of unbiased and unreliable media content, especially anti-Western propaganda, was observed during the reporting period.

In terms of protection of users’ rights - the Freedom House report discusses criminalization of  “public calls to violent action”. Based on civil society representatives, the report maintains that in spite of the narrow framing of the law, it could have a “chilling effect on free speech online.” Moreover, due to the leaked recordings of private conversations between several political figures and opposition leaders, the issue of illegal state surveillance remains as a matter of public controversy.

Evaluation of each country includes a detailed narrative report and a numerical score based on three categories: obstacle to access, limits on content and violations of user rights. The 2016 report covers the period between May, 2015 and May, 2016.

It is noteworthy, that IDFI (Institute for Development of Freedom of Information) representative, Teona Turashvili has been a contributor author to the Freedom on the Net program since 2013. Therefore, she was involved in the preparation of the 2016 country report.