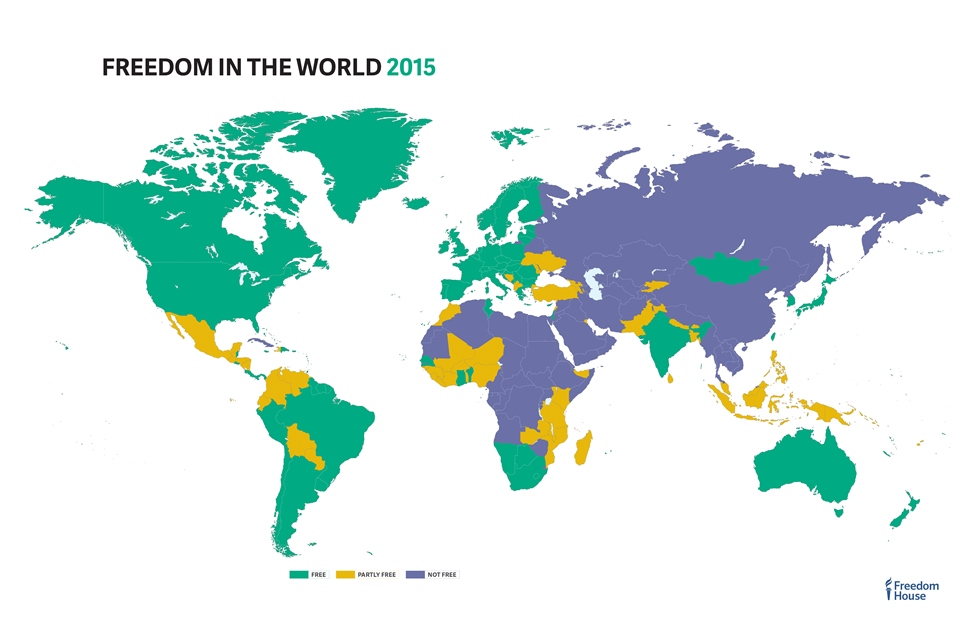 On October 28, 2015 Freedom House published an annual study of internet freedom around the world. Each country assessment includes a detailed narrative report and numerical score based on three categories: obstacle to access, limits on content and violations of user rights. The 2015 report covers the period between May, 2014 and May, 2015. According to the released measures, Georgia obtained 24 scores out of 100 and consequently, was assessed as “Free” in terms of internet freedom. Its score was improved by 2 points compared to 2014.

The report on Georgia among other key developments highlights introduction of a “two-key” system for the authorizing wiretapping, which requires the Ministry of Internal Affairs to obtain permission from the Personal Data Protection Inspector, in addition to a court order, prior to conducting surveillance. Nevertheless, the report argues that the adopted law was considered by civil society members insufficient, since this “two-key system” did not apply to data transmitted through the internet. At the same time, the MIA maintained direct access to telecom servers. On the other hand, the Supreme Court of Georgia took the obligation to proactively publish such data on a regular basis. Moreover, according to the official statistics, the number of motions on wiretapping made to courts has decreased.

Apart from this, in terms of obstacles to internet access, issues of distribution of internet users among several internet service providers (ISPs), usage of social networks and importance of long-term state strategy for development of internet infrastructure are discussed. In particular, based on the study, “competition on the internet market is quite low”, since “two ISPs control more than two-thirds of the market” (wired internet market). Similarly, the mobile internet market is also dominated by two main providers. Whereas hindrances, such as inadequate infrastructure, low speed of internet and digital divide remain. In order to overcome these challenges the government announced a plan to ensure access to high-speed internet throughout the country by 2017. Nevertheless, as the report claims, the government “lacks a comprehensive strategy outlining a clear and long-term vision for developing internet infrastructure”.

The report concerns the issue of autonomy of the regulatory body of the telecommunication sector, the Georgian National Communications Commission. Even though new rules of nomination of candidates and selection of the Head of the Commission were introduced, the signs of the central government interference in the work of the public institution were observed during the reporting period.

When it comes to online activism, the report mentions growing impact of internet use for disseminating information, mobilizing people for a common cause and waging online campaigns. The study provides an example of the demonstration against the official statement by the Ministry of Defense of Georgia (MoD) on the death of a Georgian citizen killed in Ukraine, after which the official text was removed from the website and the Ministry apologized for the “mistake”.

Regarding limits on content, it is mentioned that no evidence of online content being blocked was witnessed in Georgia as of May, 2015. Moreover, online content is becoming diverse and there were no signs of systematic government manipulation of web content. However, the research talks about existence of voluntary and self-censorship cases among Georgian users (e.g. journalists, civil servants). Additionally, several cases of deleting users’ comments on several official governmental Facebook pages were observed.

With regard to protection of users’ rights, expansion of the mandate of the Personal Data Protection Inspector is discussed. In particular, the office was authorized to check the legality of any data processing by private organizations. However, challenges such as the “processing of a large amount of data by public or private organizations without proper legal grounds; the illegal disclosure of personal information to other states and/or international organization; failure to limit the use of data for direct marketing campaigns” remain.

It is noteworthy, that, as in 2014, IDFI (Institute for Development of Freedom of Information) representative was invited to assess the state of internet freedom in Georgia and as a result, Teona Turashvili, analyst from IDFI was involved in the preparation of the country report.